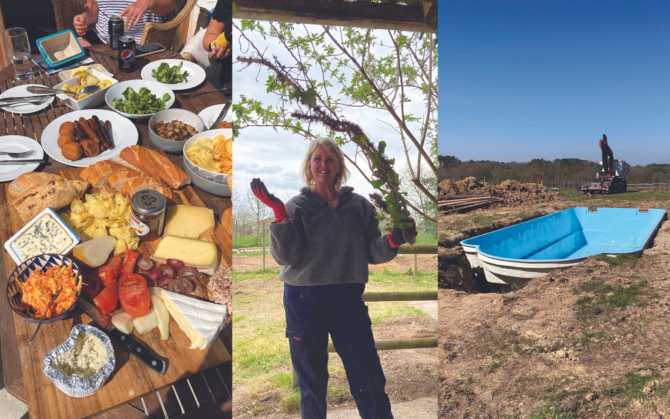 After falling in love with France on their honeymoon more than 30 years ago, Simon Lovering and his wife Cheryl have finally found their longed-for home in Gironde

Our love affair with France started in 1988 as we set off for La Rochelle in our old Audi 80 for our honeymoon. I scared Cheryl half to death when we passed through Le Mans and I realised I was on part of the track because of the Armco barriers! The old Audi was pushed to its limits for a few short moments, reaching a three-figure number on the speedometer before I calmed down and took the three-hour onward journey to La Rochelle at a much steadier pace.

We spent a blissful few days in and around La Rochelle, drinking in the culture and enjoying the food and wine for the first time. We ate a superb fillet steak one night – it became our benchmark for several years as to how a steak should be cooked, and it remained unbeaten until a return to France years later finally surpassed it.

The honeymoon could also be considered a success as our middle daughter – Jemma Rochelle – was born nine months later!

Life then got in the way for a while as our family grew and we fostered children for 22 years. But we still held onto the dream of buying a house in France, and despite a number of false starts, we finally started the process in 2020. Now you may ask why we would choose such a year, in the middle of a pandemic, to finally decide we should go for it.

I think our third daughter getting married (the older two were already married with children) and flying the nest may have pushed us a bit, as well as watching every episode of Escape to the château – we knew the time had come.

We became very good at viewing properties online, finding them on Google Earth, learning about the surrounding area, and discounting most of them without even moving from the laptop. Sometimes we would ask for more photographs from the agents, but we had a firm set of criteria and a budget and nothing was quite hitting the spot, until one day in March 2021.

It was a large stone-built house in Gironde, with potential to be even larger, set on its own land with space for a pool, not overlooked and surrounded by vineyards. It was also already half renovated, habitable in parts but with plenty still to do. It had all the scope we were looking for.

On a very pixelated Facetime call with Karen from Beaux Villages Immobilier, we saw enough to make us want it even more. We entered into negotiations and found ourselves having agreed terms for the house, with various parts and materials as yet to be fitted and most importantly (from my point of view, at least), a shiny orange tractor and mowing contraption.

Then began conversations about whether we were brave enough to go to the acte de vente stage based only on a virtual viewing. The clock had started ticking in terms of signing and we were still in a lockdown of sorts. As it turns out, we weren’t that brave!

The housebuying process gave us a legitimate reason to visit France so, armed with the necessary paperwork from the notaire, in May we jumped on a ferry, drove down, viewed the house, stayed one night and drove back to the UK. It was a whirlwind 48 hours in which we fell head over heels in love with the house, a tractor and three large fig trees.

We decided to submit an application for the swimming pool as a condition of the sale, but then discovered that the existing planning permission for the works to the house by the previous owners had lapsed as they had ceased works more than a year previously.

Karen was so helpful throughout the whole process, and in the end it required a full planning application to complete the building work and to install our pool. If anyone wants to know how to submit a full application in French and get it approved, feel free to call me! Our situation was further complicated because our property is within a certain distance of the local church, which turned out to be a Historic Monument, which added another month to the entire process.

Eventually we had a moving date of February 2022, which seemed so far away. As Covid restrictions lifted, we booked ourselves a week-long trip to the area in September, and my plan was to learn as much as I could about the place while we were there. We stayed at an Airbnb owned by an English lady who worked as an art restorer. Joanne turned out to be lovely, welcoming us into her house and becoming a good friend. We spent evenings out with her and her friends, enjoying music events and drinking far too much of her wine! We had days at the beautiful beach, flying my drone over our new property and getting to know the local markets and shops. The week cemented the idea that we were making the right move, to a beautiful part of France.

We returned to the UK and had to reconcile ourselves to the fact that we couldn’t speed up the process and would have to play a waiting game until the spring. We had a great last Christmas, surrounded by friends and family in the UK, then we made our plans, rented out our house and began packing. The signing was set to take place on 11 February, and we were ready to set off for our new life in the sun.

Speaking of A New Life in the Sun, somewhere in the middle of all this chaos, we managed to get ourselves selected to feature in the TV programme! So our very busy move date was filmed, complete with the ‘disaster’ of the lorry not having enough room for all our belongings. A second van had to be called to pick up the last bits that wouldn’t fit. These, of course, couldn’t make the ferry that night and had to be scheduled for delivery at a later date. It wasn’t the end of the world, and it was perfect ‘filming fodder’!

We had set ourselves a very ambitious target on some things. Having paid a deposit for a pool to be delivered at the end of March, I hired a digger and had the monumental task of digging the hole over the next few weeks. The film crew are naturally looking for the more exciting things to happen, so we may find ourselves exposing mezzanine floor areas where we intended to move the staircase to and removing some very dodgy render from the outside wall to expose beautiful stonework a little earlier than planned…

Another early task was to have the water tested in our well, which is very large and apparently full of lovely clear water. We wanted to use this water to fill the pool but were advised that it should be tested first. The locals tell stories of the Resistance using wells to hide dead Nazi officers! We were very pleased to get a clean bill of health.

Our main focus now is getting our first gîte ready to welcome guests, hence getting the pool in early. We’ll then work on a second gîte and the rest of the house, ultimately offering accommodation for 16 to 18 guests in time.

We’re only a few months into our new life in France and we love it already, as does the cat we inherited when we moved in. Her mouse-catching skills couldn’t be ignored in such a rural setting, so we’ve welcomed her into the house and she seems to be settling in well… just like we are!

The unique mix of legal, financial and tax advice along with in-depth location guides, inspiring real life stories, the best properties on the market, entertaining regular pages and the latest property news and market reports makes French Property News magazine a must-buy publication for anyone serious about buying and owning a property in France.