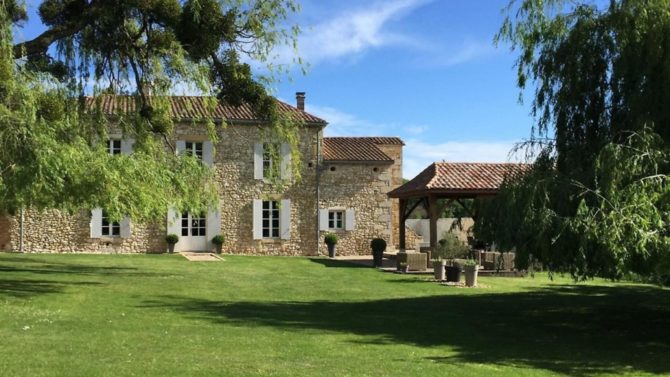 We had a pizza and sandwich delivery business in Aberdeen in Scotland. We started this when we left hotel school and ran it successfully for nine years, but it was time to either expand it dramatically or do something else.

We now had three little boys, all under the age of six and decided that a change of lifestyle and country would be a great life experience as well as an adventure – well you do when you are 30 don’t you!

France seemed the best option as we had very basic French but hadn’t ever spent time in France apart from a school trip to Paris.

What attracted you to Gironde?

Friends with a bit more knowledge of France told us to look south of the Loire as the weather would be better. Mark spent a couple of weeks researching properties in Charente and Lot-et-Garonne.

We chose Gironde because we were close to Bordeaux and everyone has heard of Bordeaux wines. We also fell in love with our first property – Château de Sanse in Sainte-Radegonde. Château de Sanse was a ruin when we bought it and we spent two years renovating it into a 15-bedroom hotel and restaurant. We sold this in 2004.

What were you looking for in your second property?

When we sold Château de Sanse, the boys were all at school in the area so it was important not to move too far away. I was keen to find something that didn’t need complete restoration.

Mark having done his apprenticeship in all things building while working on Château de Sanse had set up a small building business with the two French men that had worked with us. He of course realised that in order to get something as near to perfect as we wanted, we would be better off renovating, so that’s what we did!

We had a friend who is an estate agent and she showed us La Girarde, we fell in love with the property, the light and proportions were perfect.

Was restoration necessary at La Girarde?

Oh yes, we have completely gutted the property. We dug out approximately 50 tonnes of earth from the ground floor to put in underfloor heating. Heating and hot water is generated by geotherm – we dug a 700m² ‘pit’ in the garden in order to capture calories from the ground.

Roof, plumbing, electricity, plastering, doors and windows, staircase and bathrooms were all replaced. We also added a salt water pool.

The grounds also had to be completely landscaped. The property had been left in a pretty sorry state for several years.

What do you know about the history of the farmhouse?

The property belonged to the Carrive family. Jean Carrive, the husband of the last owner died young but was one of the youngest members of the French Surrealist movement. He and his wife, Charlotte, translated Kafka into French at La Girarde.

Charlotte (Mme Carrive) was originally from Wroclaw in Poland. She moved here and married just after the start of the Second World War. She was very active in the Resistance as well as being a lecturer at the University of Bordeaux. Many members of her family and friends were kept safe at La Girarde before emigrating to Argentina during the war.

During the students riots in 1968, Mme Carrive held her lectures here at the house too. She always had an ‘open house’, so our chambres d’hôtes carries on in that spirit to a degree. We still have visits from her students nearly 30 years later.

Did you always plan to run a chambres d’hôtes?

Yes we did, the five B&B rooms were renovated with that in mind. Mark’s business was doing well, but I needed to do something. The business is very much a family affair with everyone who is at home helping with guest dinners and drinks. I’m in charge of all bookings, marketing and organising, but Mark and the boys help out with evening service. Importantly they are very much involved with keeping the place looking so lovely!

Guests love Saint-Émilion (20 minutes away), Bergerac (30 minutes away) as well as day trips to Bordeaux and the Dordogne valley. Most love the fact that there is a market somewhere within a 20-minute drive every day.

Canoeing down the Dordogne is a favourite too. Cycling is fun but be warned there are a few hills – we are in the middle of vineyards in the countryside. We also encourage guests to just sit back and relax. Many go off and explore after breakfast and then come back mid-afternoon for a couple of hours by the pool or chilling under one of the trees.

What do you most enjoy about living in Saint-Quentin-de-Caplong?

The countryside, the calm and the sense of community.

Our busiest time is usually May through September, but we can still have lovely weather in March, April and October. Winter is quiet but that’s our time for maintenance and planning for the next season. We don’t really get very cold winters, often we can wake up to -5 but by lunchtime it’s plus five. Global warming has meant that winters are wetter than I remember.

Definitely Sainte-Foy-la-Grande on a Saturday morning. One of the top 100 markets in France and voted one of the best markets a few years ago. Love the local producers.

What dinners do you like to cook for your guests?

I cook everything using seasonal, local ingredients. We have a potager where we grow herbs, tomatoes, beans, beetroot and, for the first time last year, potatoes.

I don’t grow lettuces and strawberries as it is a running battle with snails and slugs, so I definitely buy those from one of the local markets. I use organic produce where at all possible.

We have moved away from the traditional, plated three-course dinner to a more relaxed approach, more sharing plates. An example of an evening meal could be a starter of tomato, herb and mozzarella salad, followed by marinated beef cooked on the Big Green Egg barbecue served with oven potatoes, roasted beetroot and broad beans, finishing with fresh strawberry bruschettas with homemade ice cream.

Where would you recommend to eat out?

We love L’Ardoise, Le Gensaké and the wine bar at Château Carbonneau in Gensac – all within a 10-minute drive of La Girarde.

Is there any aspect of living in France that surprised you?

I think at the beginning it was the administration, but now that we’ve been here for over 20 years I realise that it is a system that works and that maybe it was a language barrier that made it seem so complex.

What advice would you give to expats thinking of moving to Gironde?

Be prepared to integrate, speaking French is important or at least a willingness to learn. Be committed to your move and embrace the ups and the downs. Moving anywhere different comes with pros and cons and your ability to adapt makes life so much more fulfilling.

If you are coming to work or set up a business, do some research. Make sure you know what your source of income is going to be. It’s more than just sitting on a terrace and drinking that glass of wine!

Previous Article Has my tax status changed because of Covid-19?
Next Article How to choose a French bank and account