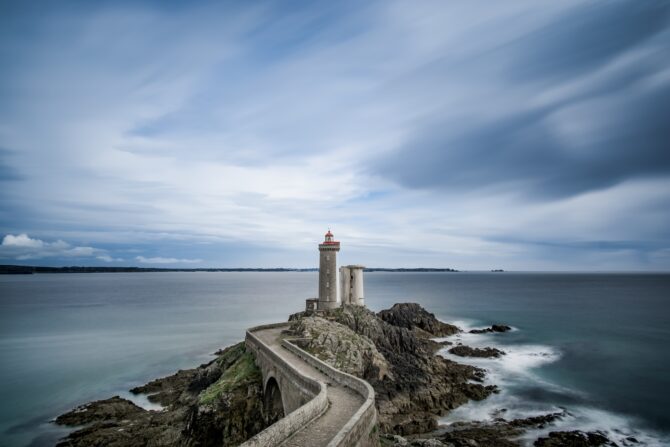 Robin Gauldie investigates the legacy of France’s many lighthouses, including one awarded Unesco status in 2021

The great lighthouse at Alexandria, erected some 2,300 years ago, was one of the seven wonders of the known world. At around 100m, it was the tallest building of its era. In 1994, French archaeologist Jean-Yves Empereur discovered its earthquake-toppled remains lie on the seabed of Alexandria’s harbour.

The fame of the great Pharos lived on long after its collapse, and it lent its name to the first phares that were built around the coasts of France to guide mariners to safe haven or warn them away from dangerous shores. In 2021, the lighthouse at Cordouan was awarded Unesco World Heritage status. Seven kilometres offshore, at the mouth of the Gironde, it has guided vessels en route to and from Bordeaux for more than four centuries. Built in 1611 and standing 67.5 metres tall, it’s the only French lighthouse still staffed by resident lighthouse keepers. In 1823, it became the first lighthouse to use the revolutionary system of lenses developed by the visionary Augustin Fresnel (1788-1827).

Cordouan may be France’s oldest working lighthouse, and the only one with keepers in residence. The Île de Planier, though, 15km off the coast of Marseille, can lay claim to a noble pedigree that makes it the longest-serving of France’s many phares. The beacon that stands here now is a mundane 20th-century building, built to replace a tower that – like many of France’s strategic lighthouses – was demolished by German Occupation forces in 1944. It’s the fifth incarnation of Planier’s lighthouse. The first was commissioned by Robert d’Anjou, Count of Provence and King of Naples, in 1320. It was a simple fire beacon, and was replaced in 1774 by a taller nine-metre stone tower. That, in turn, was supplanted in 1829 as part of an ambitious programme, initiated by Emperor Napoleon I, to provide all of France’s coastline with lights and beacons. In 1881, the lighthouse was rebuilt yet again.

From the late 17th century, France’s naval and maritime focus shifted from the Mediterranean to the Atlantic and the New World, and French rulers decreed lighthouse building along the Atlantic coast, where many still stand.

For lighthouse fans, the coasts of Brittany and Normandy are a target-rich environment.  Here are some of Brittany’s leading lanterns to spot on your next visit. Three quarters of France’s lighthouses are dotted around the rocky shores of Brittany – 20 of them in the Parc Naturel Régional d’Armorique alone. And for insomniac listeners to the soothing cadences of the BBC Radio 4’s shipping forecast, Ushant is a name that resonates.

To the French, this dot on the map, watching over the southern approaches to the Manche, is properly known as Île d’Ouessant. Around 30km west of Cap Finistère, it has a claim to be metropolitan France’s remotest cluster of lights, with five great lighthouse towers: Kéréon, on its own tiny skerry amid fierce currents; Le Stiff, built on the highest point of the island in 1695 by Louis XIV’s great engineer, the egregious Marquis de Vauban; Jument, Nividic, and the daddy of them all, Le Créac’h, reputedly Europe’s most powerful light.

In 1811, Napoleon Bonaparte had founded the Commission des Phares, tasked with developing a lighthouse-building programme that gathered pace in the 1820s. Augustin Fresnel’s literally brilliant innovations were the key.

His lenses were lighter and brighter than those that had been in use since the early 19th century, making each beacon visible much further out to sea. Even more importantly, his system allowed each lighthouse to have a unique signature of light flashes, allowing navigators to pinpoint their location much more accurately.

Soon, Fresnel’s lenses were in use worldwide: the first foreign order came from Scotland, where the pioneering engineer Robert Stevenson (grandfather of the author Robert Louis Stevenson) was overseeing an ambitious programme of lighthouse construction around Britain’s most hazardous shores. By the second half of the 19th century, almost all the world’s lighthouses used Fresnel’s system.

The golden age of French lighthouse building was drawing to a close by the mid-20th century. Occupying German forces destroyed historic phares like those at Île d’Yeu and Île de Planier, to deny their use to Allied invasion forces. They were replaced by more modern towers, many of them designed by architect Maurice Durand in his distinctive Art Deco style.

The last to be completed, in 1968, is the Phare de l’Armandèche, at La Chaume in Les Sables-d’Olonne. Just under 39 metres tall, it is still in use and has been a listed monument since 2012. Like almost all of France’s working lighthouses, it is fully automated, requiring only an occasional maintenance visit to keep its light in action.

France’s lighthouses have come a long way from the early fire beacons used by the Romans some 2,000 years ago to the era of radar and satellite navigation, but they still have a vital life-saving role to play. Each with its own story, many of them are spectacularly located, highly photogenic, and well worth discovering. Previous Article My French Village: An Australian chef in Montmorillon
Next Article As seen on A New Life in the Sun: Real life in Gironde