First published: 14 January 2023 by Andrew Prior 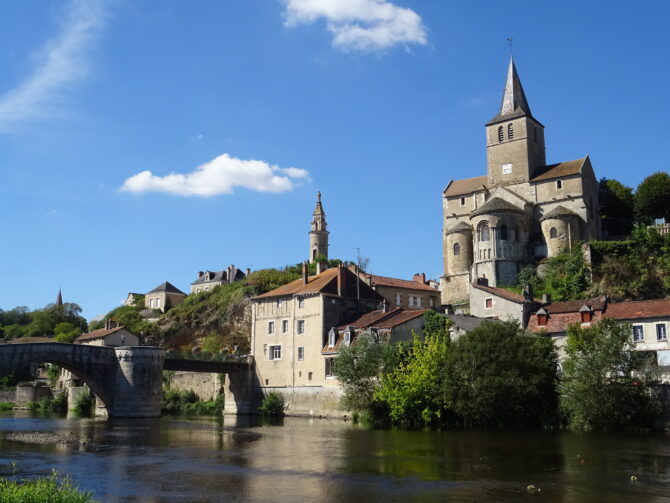 What brought you to Montmorillon?

I moved here with my husband, Peter, in 2020 on the first day of lockdown. We were living in Paris for Peter’s university. First we had looked in the Loire but then expanded further south. The main draw was the town itself and its proximity to fabulous produce, lots of vegetables, beef, goat’s cheese, butter. It’s a small town of 6,000 people that retains a village atmosphere with a rich cultural life. The famous writer Régine Deforges, author of La Bicyclette Bleue, campaigned to protect the historic centre and secured its designation as a Cité de l’Écrit et des Métiers du Livre (City of Writing and Book Professions).

What aspects of village life do you enjoy most?

Walking our two golden retrievers, Louis and Lenny, watching people going about their everyday lives, and saying hello to the neighbours. Everyone here is very sociable. We know that if something goes wrong, they’re there. I woke my neighbours up one night at 11pm to borrow a ladder because my gate wouldn’t open. They couldn’t have been lovelier about it.

How was your French when you arrived?

I attended Alliance Française in Melbourne for 10 months, and while we lived in Paris I took lessons offered at the mairie, so I can manage. Peter is fluent – he earned his PhD in Financial Regulation from Sciences Po university in Paris.

Since 2016 I’ve been living, travelling, breathing, cooking and eating all things French

How do you manage with work?

Like a lot of people, I had to pivot when the pandemic happened. I was doing food tours, which came to a halt. So, I started a YouTube channel along with the Fabulously Delicious Podcast, which is named after my personal motto, ‘whatever you do, do it fabulously’. I then found that while it used to be the case that you brought people in to a studio for a interview, once again, the pandemic had changed that and made it a lot more accessible to do podcasts remotely.

Have you developed a taste for any local specialities?

Definitely goat’s cheese, which in this area is something of a speciality. I didn’t particularly like it before, but now that we’ve been living here a while and I’m discovering so many different artisanal varieties, I love it.

What surprised you the most about this part of France?

The extent to which Montmorillon is just not on people’s radar as a tourist destination. It’s only two and a half hours from Paris. It’s a really gorgeous, pretty town, with all the amenities. What do they say? You can tell if a French town is doing well by how many hairdressers and car yards there are? I think we have six hairdressers and three car yards. So there you are. But seriously, there are so many fabulous things to see and do, from the châteaux to the wonderful food, but still, it’s not on the map. We get French tourists but not a lot of English or American ones.

I don’t really have a favourite saying but I tend to have a song permanently stuck in my head at all times. Usually, it’s Edith Piaf ’s Padam Padam, and often – yes, I am a sad Australian – it’s Kylie Minogue’s Je Ne Sais Pas Pourquoi. So rather than a saying, it’s a song, and preferably a tacky one!

Regular France Today Live guest Andrew Prior often shares delicious and comforting French classics on our live events. Andrew first expressed his passion for food in a blog while living in Paris, until a ‘fabulous’ new chapter opened in 2013 with MasterChef Australia. Since 2016 Andrew has been living, traveling, and cooking all things French, completing Le Cordon Bleu pâtisserie course, and holding foodie tours of regional France and the Côte D’Azur. From his base in Nouvelle-Aquitaine he creates YouTube videos and the weekly ‘Fabulously Delicious’ podcast.