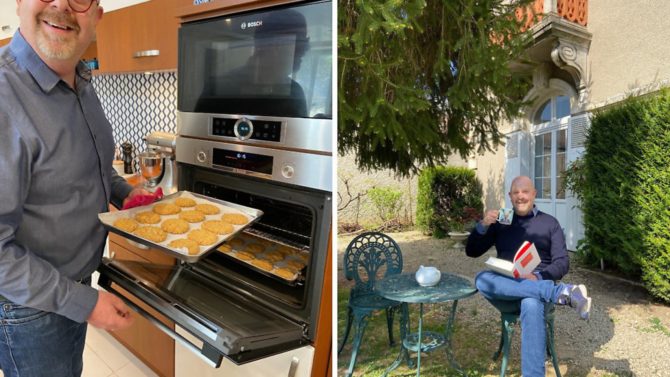 What was your first experience of France?

I came to France for the first time in 2006 with my now-husband Peter. It was our first holiday in Europe and we spent two weeks in Paris and a week in the south. I fell in love with France and French food on that trip and in 2012 we moved to Paris for a year so that Peter could study at the university as part of his PhD. I had to come on a cultural visa which meant I wasn’t allowed to work so he went off to university and I walked around the streets of Paris! That really cemented my love affair with France and all things French, and in 2016 we moved to Paris.

When and why did you decide to swap Paris for the French countryside?

It was always our plan to have an apartment in Paris and then a house in the country when we came to France, and at the end of 2019 we decided that if we didn’t move to the country soon, we might never do it. We sold up in Paris and originally explored the Loire area before a property we saw online led us to Montmorillon in Vienne. It was an old presbytery and Peter wanted to buy it without even seeing it! Luckily we didn’t because it was far too big and needed major renovation. We walked around the town and fell in love with the house we live in now, which we moved into just as the first Covid-19 lockdown was announced!

What inspired your passion for food and cooking?

Food has always been a passion of mine and I was inspired by television chefs like Nigella Lawson, Rachel Khoo and Rick Stein, whose French Odyssey programme prompted my first real foray into French food. I applied to MasterChef Australia in 2013 and it changed my life. I loved being part of the show and afterwards I set up Queenie’s Food Tours, offering walking food tours in Melbourne.

What makes French food so special for you?

When we moved to Paris I enrolled on a pâtisserie course at Le Cordon Bleu. I appreciate the technique involved in the process of cooking French food and I love the seasonality of it. I love that you can go to a market or supermarket and you won’t find things that aren’t in season. I was able to indulge my love of French food in Melbourne by starting an all-day French food tour, which began with coffee and croissants followed by a three-course French lunch in one of the best bistros in Melbourne, then chocolate and macarons after that, finished with French cheese and champagne.

When we first moved to Paris I was still trying to manage the tours in Melbourne but it was too difficult from the other side of the world, so I started focusing on tours in France instead and doing YouTube videos about Paris. When we moved to Montmorillon in 2020 I changed to doing cooking videos, which then evolved into online cooking classes. Ultimately the dream is to have a little studio for teaching cookery classes in person and I’ve got my eye on a few places in town, but for now I just want to get out there and cook with other people and if it has to be online then so be it.

If you had to pick a favourite French dish, what would it be?

It has to be boeuf bourgignon – I make it way too much and need to stop because I should try some other French dishes but I’m obsessed with it. Any French person I’ve made it for says it’s the best they’ve ever had, which is quite an accolade!

The simple pleasures of a French cheese shop

Memories of the magic of visiting Paris

Previous Article Interview: David Buttery author of Napoleon’s Paris
Next Article How to furnish your French home on a budget