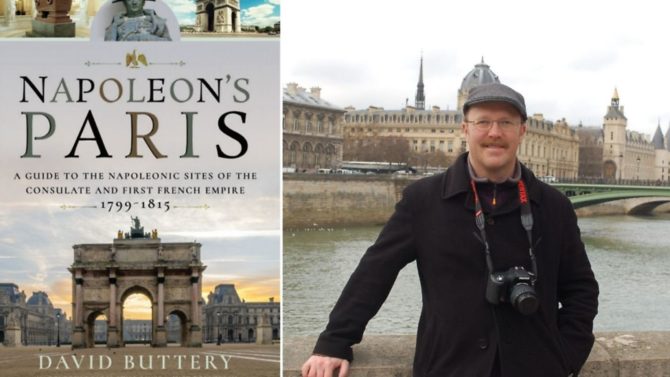 As May 2021 marks the 200th anniversary of the death of Napoleon Bonaparte, David Buttery discusses Napoleonic sites in Paris and the ways the emperor changed the city

David Buttery is a leading historian of nineteenth-century British military history with a particular focus on the Napoleonic Wars. We speak to him about his latest book Napoleon’s Paris: A Guide to the Napoleonic Sites of the Consulate and First French Empire.

What made you want to write Napoleon’s Paris?

Paris is one of the most incredible cities in the world with a matchless reputation for French cuisine, history, architecture, art, culture, fine wine and a great deal more besides. Emperor Napoleon I was a remarkable man whose influence on the history of the world is profound but he also loved Paris to the extent that he wanted to make it the most beautiful city in the world. I wrote this guidebook hoping to offer people a way of enjoying this romantic city along with learning about Napoleon who is so closely associated with it.

So how did Napoleon change Paris?

Napoleon was a tireless over-achiever who drove his subordinates mad with incessant orders, suggestions and outright interference, but he did get things done. When I began researching this book, I already knew he had worked hard to improve Paris but was surprised to discover the true extent of his achievements nonetheless.

From a practical point of view, he built or improved roads, churches, pavements, sewers, fountains, cemeteries, bridges, quays and canals. His ambitious civil planning saw old slum dwellings demolished and replaced by new thoroughfares like the Rue de Rivoli, allowing Parisians to travel around the capital more easily. He reorganised the production and distribution of goods and a fine example was the improvement of the Halle de Vins, which helped make France the foremost wine producer in the world. He also founded institutions like the Banque de France and the French Stock Exchange in Paris making his nation far more competitive.

What is the most surprising thing you learnt on your research trips to Paris?

At first sight, the Fontaine du Palmier appears to be a marvellously decorated fountain but little more than a reminder of Napoleon’s military achievements. However, I discovered that this fountain had a surprisingly practical purpose during research. Imperial propaganda was only one reason why Napoleon ordered fifteen large fountains constructed in Paris. Today we take piped water for granted but the situation was very different in France during the early nineteenth century as plumbing was a luxury only the rich could afford and Parisians relied on water sellers for a necessity that was expensive, heavy to carry, awkward to store and sometimes contaminated. The fountains formed part of Napoleon’s plan to bring more water into the city as drinking from the polluted River Seine was unsafe. These fountains provided drinking water to the general public and Parisians appreciated the free water they drew from them while their beautiful decoration reminded them of who they had to thank for it.

What is a lesser-known Napoleonic site in Paris?

The Château de Malmaison lies on the edge of Paris, so far fewer people visit this marvellous place compared to locations in the centre but it is worth a short Métro and bus ride to reach it. I love this house as it was where the Imperial couple lived and preferred to spend their leisure time rather than palaces that were too formal and grand for real comfort.

This was the Empress Josephine’s home far more than her husband’s and she cheekily borrowed money for it in his name while he was in Egypt. In defiance of imperial custom, signs here refer to Josephine and Napoleon rather than the other way round reflecting its closer ties with her. She was famous in her own right and the dire experience of nearly being guillotined during the Revolution persuaded her to devote her time to horticulture, patronising the arts and her family. She bred new strains of roses in these gardens with some named in her honour.

Do you have a favourite Napoleonic site in Paris and why?

After some consideration, my favourite site is the Hôtel des Invalides, home to the final resting place of Napoleon and the ‘Little Corporal’ statue which epitomises the image of the emperor in bicorn hat and greatcoat that most people recognise. The golden roof of the Église de Dome is an incredible sight and the royal church beneath it displays some incredible religious iconography. Yet it is the circular walled aperture allowing visitors to look down onto Napoleon’s tomb that immediately draws the eye with light from the dome above shining down onto his vast red stone sarcophagus. It is surrounded by imperial symbols and statues of classical goddesses, presenting a sombre but magnificent sight. The most revealing thing about Napoleon’s tomb for me are the bas reliefs on the viewing gallery depicting his work to improve almost every facet of French life including the law, religion, education, public works, industry and commerce. Napoleon famously said that he would be content with a modest grave by the River Seine and never predicted that his successors would build this great tribute.

Previous Article Rural realities: things to think about before moving to the French countryside
Next Article From MasterChef Australia to cooking in France