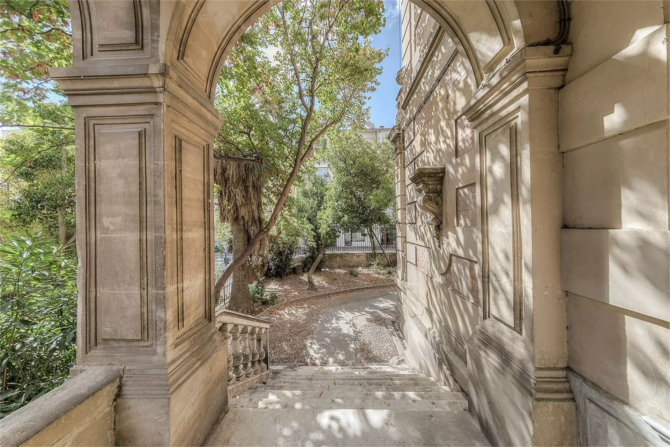 This stunning renowned private mansion in Perpignan dates from 1899 and offers nine bedrooms, a cellar with a workshop and a majestic entrance hall. It’s surrounded by a private wooded garden and is set back from the palm-lined Avenue du Général de Gaulle that leads to the train station.

Constructed in 1899, this mini-château was the home of Émile Drancourt, a prosperous wine merchant that had moved to Perpignan five years earlier. According to Drancourt’s granddaughter he chose the popular Viggo Dorph-Petersen as his architect after having seen the Château d’Aubiry on his way to Céret. The property which is now located at No. 21 avenue du Général de Gaulle was once a sprawling estate that had a warehouse and shipping docks, but as the land was divided in the mid 20th-century it now consists of the mansion itself and a small garden.

Designed around a monumental marble staircase, L’ Hôtel Particulier Drancourt has elegant fireplaces, high ceilings with superb mouldings, and elaborate tiled flooring. The property offers potential as a hotel business – its bright rooms and location (just 300m from the train station) would certainly be popular with guests. It would also make a sumptuous family home or perhaps as an extravagant office space for a business.

The economic upturn of the Belle Époque and arrival of railroad to Perpignan saw the bourgeoisie wanting extravagant residences, and Dorph-Peterson established his reputation among the Catalan bourgeoisie – building refined mansions with slender turrets, long windows and floral ceramic medallions. His designs include the Château d’Aubiry in Céret, the Château de l’Esparrou in Canet, the Villa Camille in Banyuls-sur-mer and the Protestant temple of Collioure plus various other villas and chateaux.

Thirty kilometers north of the Spanish border, Perpignan is the former continental capital of the Kingdom of Majorca, and this southern city retains elements of its past with its historic architecture and current status of ‘Ville d’art et d’histoire’.

Perpignan’s train station, which is at the end of the street upon which this mansion is located, was once referred to by Salvador Dalí as the cosmic centre of the universe. Indeed at the time of this property’s construction some 65 years before Dalí’s vision, the Gare district where Drancourt chose to live was a bustling neighbourhood full of mercantile activity, allowing Danish architect Dorph-Peterson to make a name for himself.

The property is located 7km from the Mediterranean sea, 6km from Perpignan airport which serves flights to Leeds, Birmingham and London Stansted in the summer.

For more photos of the interior you can view the listing on FrancePropertyShop.com – On the market for €430,000 with Beautiful South

Previous Article As seen on A New Life in the Sun: Real life in Gironde
Next Article Take a stroll in Brioude: A beautiful detour