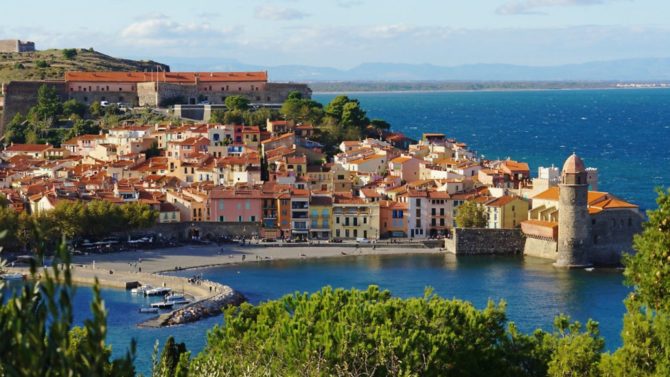 Have you always dreamed of living on the coast of the south of France but couldn’t afford the Riviera? Forget the Côte d’Azur and go househunting on to the coastline of Occitanie.

On the coasts of Hérault, Aude and Pyrénées-Orientales you will find a more authentic south of France: modest fishing ports, long sandy beaches loved by French families, a coastline punctured by intriguing lagoons and marshes, food that hints at old Spanish influences and affordable properties. Gone are the Côte d’Azur’s big crowds, super yachts, mega villas and apartment complexes and other flamboyant attributes.

With sunny weather year-round, good transport links and an attractively quieter lifestyle, this area has it all. Sometimes dubbed the ‘Other Riviera’, Occitanie’s coastline needs no comparison however to show off its appeal.

At the southernmost point is the department of Pyrénées-Orientales, near the Spanish border. The area still shows signs of its Catalan past so you’ll notice town signs translated into Catalan and restaurants serving tapas.

The best known village (and a sought-after location) is the charming port of Collioure with its recognisable little round tower dominating the harbour where colourful Catalan fishing boats bob in the water. South of Collioure, the Côte Vermeille (Vermilion Coast – an apt contrast to the Côte d’Azur) forms a series of jagged rocky bays until it reaches Spain. It’s a beautifully preserved coastline where you’ll find little harbours and vineyards dipping their toes in the sea; it’s around here that Banyuls sweet fortified wine is produced.

This southern end of the coast is dominated by the lush Albères Massif, low forest-topped mountains which boast some calf-straining hikes, rewarded by far-reaching views of the coast and, of course, the Pyrénées mountains. The Pic du Canigou, the highest point in the area, is forever visible on the horizon. Slightly inland, you’ll find sleepy villages such as Laroque-des-Albères and Sorède that have more of a Pyrenean mountain village feel yet are just 15 minutes from the sea.

North of Collioure, the coastline changes dramatically and morphs into never-ending white sandy beaches. Argelès-sur-Mer, St-Cyprien and Canet-en-Roussillon are popular holiday resorts with long silver beaches and a plethora of watersports on offer; St-Cyprien’s marina is the third largest in Europe and the beaches are several kilometres long so you rarely have to fight for your place on the sand. Notaires de France figures indicate an average price of €168,500 for houses and €1,750/m2 for apartments in Pyrénées-Orientales. A house in Argelès-sur-Mer would set you back on average €183,000 while something in the picturesque port of Le Barcarès is just €120,000.

Perpignan has a pleasant town centre with lots of parks, fountains and two rivers called la Têt and la Basse. It’s a relatively small and compact city meaning you can do a lot on foot. The historic centre is full of Catalan heritage as the town used to be the capital of the Kingdom of Majorca and is now a Cité d’Art et d’Histoire. The closest beach, at Canet-en-Roussillon, is just 20 minutes away. Prices in Perpignan are currently at an average of €161,900 for houses and €1,160/m2 for apartments and you can find everything from apartments to villas.

Where to buy a bargain French property by the sea

Seaside towns in the Aude department such as Leucate and Gruissan are quaint and authentically French. Gruissan is particularly striking as the old town was built in a circle surrounding the Barberousse tower. The village port is from the 1970s, built to link the old town to the traditional fishermen’s beachside huts on stilts which featured in the film Betty Blue and make popular weekend boltholes for city folk from Narbonne.

Much of Aude’s coastline is taken up by the natural regional park of La Narbonnaise. From the Corbières hills all the way to the Med, a landscape of saltwater lakes, low mountains, rolling green hills, vineyards and little islets spreads across nearly 80,000 hectares, providing a huge natural playground for people who love the outdoors.

There are some lovely coastal towns such as Port La Nouvelle, a working fishing port established in the 17th century. The long sandy beaches are squeezed between the Narbonnaise regional park and the sea and it is a very natural coastline with family-friendly resorts. Slightly inland is the area called Corbières Minervois, famous for the wines it produces.

Prices in Aude are very attractive, the average being €130,000 for a house and €1,770/m2 for an apartment. The communes of Gruissan and Fleury are the property hotspots but are still under €150,000 for a house on average.

Narbonne is the nearest large town from the coast of Aude, though Carcassonne is the department’s préfecture. Set on the edge of the regional park, Narbonne is just under 30 minutes from the beach at Gruissan-Plage. This historic town, founded by the Romans, is packed with ancient heritage, from the Archbishop’s Palace to the future museum of Roman civilization which will open in 2020. The Canal de la Robine slices through the town and you can hike up two nearby summits, Fontfroide and La Clape. Property-wise, average prices for houses and apartments are €182,700 and €1,660/m2.

Quiz: Do you know the French departments?

While seaside resorts in Pyrénées-Orientales and Aude are quite small and compact, Hérault boasts a couple of larger coastal towns though they are no less authentic and pleasant. Travelling from the south, the first resort you find is Valras-Plage; it began as a fishing village at the mouth of the Orb river and soon became a chic resort. It still boasts fine examples of 20th-century villas but it’s now quite a modern resort and the beach of choice for people in Béziers when they want a day out by the sea.

Agde is perhaps one of the most famous resorts on the Mediterranean as it houses France’s (and perhaps the world’s) largest nudist colony but it also has a lovely old port and a fun marina lined with shops and bars. A large section of the coast around Agde is classified as protected natural sites. This includes the Bagnas reserve where wetlands, dunes, coastal heaths and salt meadows come together to create an exceptional environment, and the Posidonies du Cap d’Agde, a Natura 2000 preservation site.

Along the coast is the intriguing town of Sète, whose centre spreads across a rounded hill, le Mont St-Clair. It overlooks the port and some pretty canals – which give Sète its nickname of la Venise du Languedoc – and the Thau lagoon where delicious oysters are farmed. It’s a lively town, particularly in the summer when festivities such as the St-Louis water jousting festival, commemorating Sète’s founding by Louis XIV, brings in crowds of local and international visitors. Frontignan is another lively port caught between the sea, the lagoon and the Canal du Rhône à Sète. It’s famous for its Muscat de Frontignan wine. Finally, on the coast just south-east of Montpellier is the small resort of Palavas-les-Flots which also has a canal slicing through it – there’s a chair lift called the Transcanal (allegedly, the world’s shortest at 83m long) that allows people to easily cross Le Lez canal.

Montpellier, the préfecture of Hérault, is the largest city in the area. This bustling and dynamic city was voted the eighth best town to live and work in thanks to its proximity to the sea (a short tram ride away), excellent cultural life and good weather. Its centre is full of history and beautiful architecture and there are a number of interesting museums and cultural events held every year. The average price for a house in the city is €267,000 and €2,580/m2 for apartments but it appears the towns on the outskirts of Montpellier are the real hotspots with prices closer to the €350,000-€400,000.

Previous Article How a British-American couple became first-time buyers in France
Next Article Brits should be allowed to stay in the event of no-deal Brexit, says France