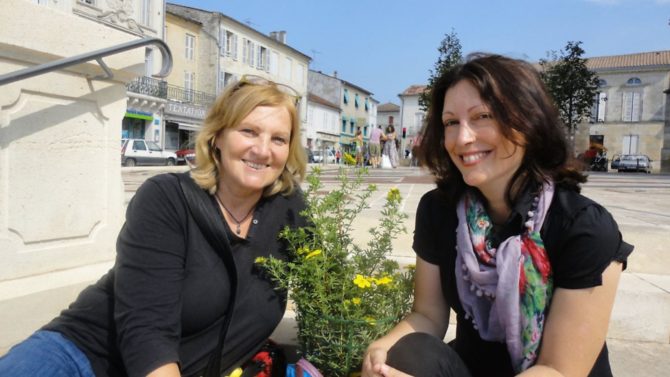 When Jacalyn Burke left the UK for New York, little did she know that she would meet her long-term partner Kate Fitzgerald and that they would buy their first home together in France. Jacalyn tells us how they made it happen and why they love life in Charente-Maritime

Can you tell us a bit about your background?

If you had told me in my youth that in 25 years’ time I would be living in a French village with an American woman making an income from writing, I would never have believed you. I certainly had no desire to live in France and I didn’t think that I could support myself as a writer. Nine years would pass before the first step on this path would even be unwittingly taken. In 2002 and less than 12 months after 9/11, I found myself in a devastated New York City. I had one American friend – a woman that I’d met on the internet – no plan, no income and perhaps more importantly, no visa for prolonged stay. But as luck would have it, less than three months after my arrival I would meet my long-term partner Kate Fitzgerald in Greenwich Village. As an immigrant, I got to understand the enormous challenges faced by those simply looking for a better life.

What was your connection to France?

Like many expats, my parents had retired from the UK to France in search of a better life. As a child, we regularly holidayed in France visiting some of my mother’s French family members, so France was always a familiar place to me. Kate first visited France in 1993 and felt an immediate affinity with the French culture and people. In 2006 Kate and I were cycling down a country lane close to my parents’ home when we passed a house. It wasn’t the one we would eventually buy, but it stopped us in our tracks. In that moment we both knew that even though I was a Brit, and Kate was an American, we would buy our first property in a third country: France.

How did you find your French home?

We bought a house in Charente-Maritime, now in the Nouvelle-Aquitaine region, in 2007, without actually seeing it first! When my father, who is a builder, found out that his neighbour was selling a nearby property, he took a look at it and thought it was a good deal. In fact he said that if we didn’t buy it, he would! The property consisted of a good-sized main house with an attached cottage, set in nearly two acres of land. My father thought it had great potential and Kate and I trusted his judgment. So we made an offer and it was accepted.

How did you manage the renovation?

When we arrived and first set eyes on our tumble-down property we thought, ‘what have we done?’ Our new home was termed ‘derelict’ and for good reason. In the beginning, we would only spend two weeks each year in our French home. Each time we arrived we would weep at the sheer amount of work that lay ahead of us. There were endless days of cleaning, shooing off owls and bats and mice. It would take us many years and a shoe-string budget while living in New York City, to renovate our home and the adjoining cottage. Many people thought we were mad – there we were living and working in New York and thousands of miles away was our charming house. Eventually both our main house and the adjacent cottage began to take shape. The cottage, once a three-wall structure where the farmer parked his tractor, is now a spacious, self-contained, one-bedroom gîte. It boasts a private garden, a meditation room and off-street parking. We offer our guests amazing views, access to wine tours and fine dining and close proximity to the town of Jonzac.

Making an offer on a French property

An amazing property renovation in Brittany

5 top tips for renting out your property in France

What made you decide to spend more time in France?

After the many years of hard work, we finally got to the point where we could just sit back and and light a fire. And it would all make sense. Our lovely French neighbours would invite us over for a chilled glass of pineau or they would leave us fresh produce on our windowsills. In return we would amuse them with our noon hikes in the blazing sun, or our large dinners at 6pm and so many other cultural faux pas. Each year we would return to the States with heavy hearts knowing that a full 11 months would pass before our lovely home was opened up again. Gradually our work schedules became more flexible, and we gradually increased our time in France from two weeks to four and eventually to three months a year. However we knew that we would one day want to spend an entire year in our house.

How did you make that happen?

It became possible by late December 2017. Not only was Kate now semi-retired and able to take her editing work anywhere, I too, was able to leave childcare and sustain myself as a writer and ghostwriter. I was also, by now, an American citizen and so was not restricted to remaining within the US for six months of the year. It was during the Christmas holidays with snow on the ground in New York that I turned to Kate and said, “Let’s go to France for a year and experience our village through every season”. It was always a dream of ours to go deeper – with our neighbours, the language and the culture.

What are the highlights of living in France?

Our ‘year in France’ isn’t quite over, yet it has already yielded so many unexpected joys. We live in the main house and are able to work from home, while looking over fields of sunflowers and corn and the ancient forest of Agudelle, and we rent out the cottage for holiday lets. We are patiently learning French and we attend all types of local French activities and join in the customs. And we are so lucky to be treated with such kindness. Looking back on 25 years of life I would say that having left my home country, travelled and experienced so many wonderful things, living in France is such an amazing gift to give oneself because it just keeps on giving.

The cottage is available to rent via Airbnb or through Jacalyn and Kate’s website www.fleurdusoleil.com

How to integrate quickly into French life

Why I have no regrets about moving to France