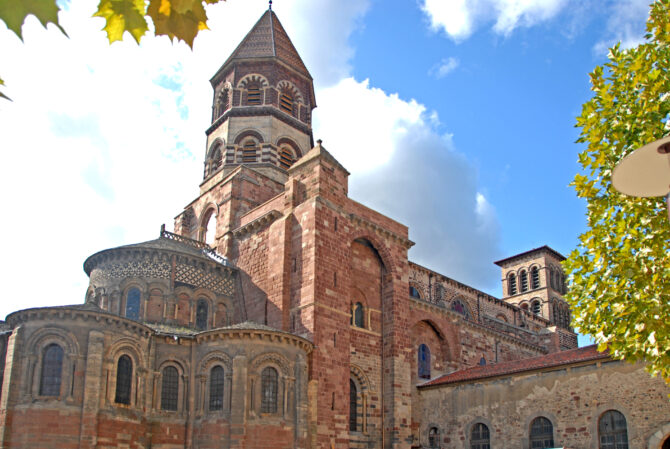 A glass-sided lift whisks me up from the Parking du Centre Historique to begin my visit to Brioude. With its origins dating from Roman times, Brioude grew to be an important settlement in Auvergne and is labelled one of France’s ‘Plus Beaux Détours’ (smaller French towns worth stopping off at).

A short stroll from the lift, I pause at Esplanade de Verdun to admire the view to the east of the Livradois mountains, rising to an altitude of 1,100 metres. I pass the mairie and the brasserie named after Brioude’s Welsh twin town, Cardigan, then reach Le Doyenné, a renovated 13th-century deanery, famous for its highly decorative ceiling, restored in 2017. It is host to annual modern art exhibitions, featuring such notable painters as Chagall and Miró. At the time of writing the town is waiting in suspense for this year’s artist to be announced.

I turn right at Le Doyenné into Rue de la Halle and now feel totally immersed in this fascinating historic centre. The cobbled surface of Place Grégoire de Tours leads me to the jewel in Brioude’s crown, the Basilica of Saint Julien, the largest Romanesque church in Auvergne, constructed from the 12th and 14th centuries. The crypt of the Basilica houses the relics of Saint Julien, a Roman centurion martyred for his Christian faith. It was his shrine that brought pilgrims to the town to put Brioude on one of the many Saint Jacques de Compostelle pilgrimage routes.

As I enter the Basilica I’m captivated by the colours – the beautifully preserved 13th- century frescos, then the contrast of the contemporary stained-glass windows by Kim En Joong, a Dominican monk of South Korean origin. The 16th- century mosaic floor is made from multi-coloured pebbles from the Allier river. I leave with reluctance but there’s much more of the historic town to explore.

Opposite the south entrance I’m intrigued by the café, La Mirandelle, a 15th- century building of corbelled construction and it seems a great place to stop for a coffee. Refreshed, I take the narrow arcade of Rue de la Ganivelle, that boasts a 9th-century gateway. It leads me to La Maison de Mandrin, dating from the 15th century, complete with half-timbered facade and Gothic vault. Mandrin was a French brigand who apparently visited here in 1754. It’s now another exhibition space so Brioude is certainly a town for the art-lover!

I pause to admire the vibrant colours of the window display of the Hôtel de la Dentelle, a museum dedicated to the art of lace-making, then I retrace my steps to explore more of the old town on the other side of Rue du Commerce, which, as its name suggests, is a busy street home to a host of independent shops.

I find myself in a maze of alleyways bordered by tall half- timbered buildings with tiny wrought-iron balconies. These open up into the quintessential French place’. Rue Duguesclin leads me into Place Saint-Jean, then Rue d’Alsace takes me to Place Eugène Gilbert, named after Auvergne’s famous aviator. I love the 12th-century Roman building, now a crèmerie, and even more so the mouth- watering display of cheeses!