First published: 16 May 2019 by Helen Parkinson 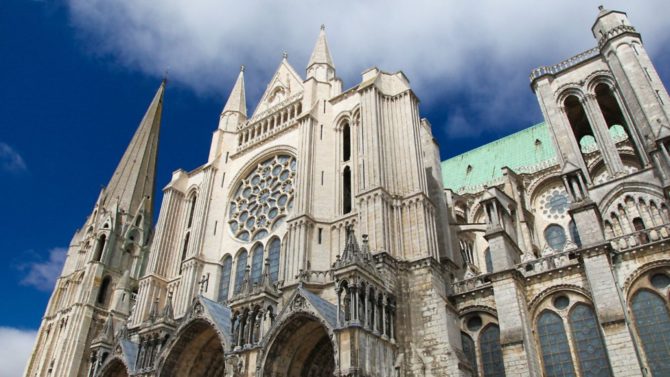 With France’s foremost Gothic cathedral wounded, here are more marvellous feats of architecture to admire outside of Paris

There have been at least five cathedrals on the site of the present-day building, constructed after a devastating fire in 1194. The cathedral boasts three large rose windows; other design features of interest include an intricate labyrinth.

Overlooking the River Somme in Picardy sits the tallest complete cathedral in France, built between 1220 and 1270. The cathedral also has the largest medieval interior in Western Europe. In the 1990s, it was discovered that the cathedral’s western facade used to be multicoloured; the original colours are now projected onto it so that visitors can see what it used to look like.

At least 25 French kings have been crowned within the walls of this north-eastern city’s cathedral, and Clovis, king of the Franks, was even baptised here. The cathedral is also renowned for having a whopping 2,500 statues, which are marvelled at by one million visitors every year.

Immortalised in literature by Gustave Flaubert and in art by Claude Monet, the seat of the Archbishop of Rouen has inspired many creatives. Construction on the present-day cathedral began in the 12th century and it has endured a turbulent history: badly damaged during the French Wars of Religion by the Calvinists then struck by lightning twice in the 17th century.

Unlike many of its contemporaries, Bourges managed to escape destruction during the Wars of Religion and the Revolution, as well as during the two World Wars. One of its most interesting features is its astronomical clock, first installed in 1424. After being badly damaged by fire in 1986, it underwent a complete restoration and was reinstalled in 1994.

One of only a few magnificent gothic cathedrals in the south of France, Rodez’s distinctive pink sandstone cathedral is renowned for its 87m-high bell tower that dominates the town. Its construction lasted from the 13th to 16th centuries, with work interrupted by the Black Death and Hundred Years’ War.

This cathedral is dedicated to the first bishop of Le Mans, Saint Julian, who lived during the 4th century. It is located to the northeast of the quaint old town, also known as the Cité Plantagenêt. There are still around 20 stained glass windows dating back to the 12th century, all restored in the 19th century. In fact, one of the oldest surviving stained glass windows in France can be found here in the form of the Ascension window, dating back to 1120.

Amazing buildings to visit by Le Corbusier in France

Previous Article Who is the French judge on Bake Off: The Professionals?
Next Article From London rat race to dream home in Dordogne