Who is the French judge on Bake Off: The Professionals? 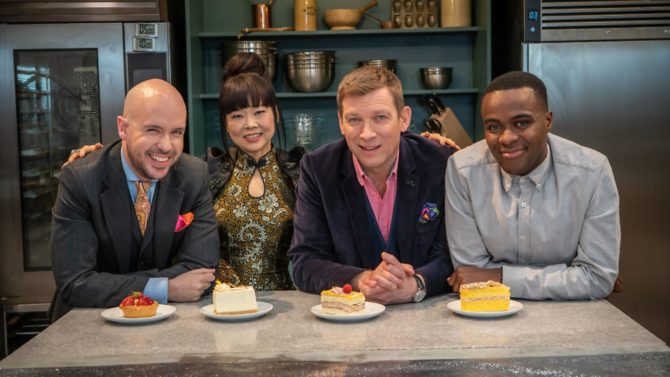 Professional pastry chefs who work at some of the country’s top hotels and restaurants are being put to the test in a new series of Bake Off: The Professionals.

The show, a spin-off from The Great British Bake Off, puts pairs of pastry chefs from around the UK throught their paces with a series of gruelling baking challenges including designing showpieces made from delicately sculptured sugar and chocolate.

The two critical judges on the show are executive pastry chef Cherish Finden and chef pâtissier and Frenchman Benoit Blin.

Where does Benoit work?

Where is he from?

Benoit grew up in a small town in Normandy, France. From an early age he used to wait around the two bakeries on the end of the street where he lived with the bakers’ sons, hoping to be given some tasty pastries at the end of the day. He soon developed a sweet tooth and ended up taking an apprenticeship at one of them.

What was the first thing he learned to bake?

Chouquettes, a type of choux pastry covered with nibbed sugar. He still serves them as part of the petit fours selection at Le Manoir aux Quat’Saisons.

Where has his career taken him?

Benoit took in a second apprenticeship as a chef pâtissier, a year’s national service as a naval chef working at the Normandy Hotel in Deauville, before landing the position of senior sous chef, pastry, at the world-renowned Hotel Ritz in Paris in 1991 where he worked with many of the best chefs in France.

In 1995 Raymond Blanc persuaded him to come to the UK to work at Belmond Le Manoir. He achieved the title of MCA (Master of Culinary Arts) in 2005, the highest accolade in the industry, awarded only every four years to the best pastry chefs in the UK.

What is his role on Bake Off: The Professionals?

Benoit has been a judge since the first series of the show was launched on BBC2, previously called Bake Off: Crème de la Crème, which was presented by Tom Kerridge.

This year’s series, the second on Channel 4, is hosted by former Great British Bake Off contestant Liam Charles and comedian Tom Allen.

It features teams from the Kimpton Fitzroy London, including its French head pastry chef Thibault Marchand as well as Four Seasons at Ten Trinity Square’s Jake Lovelace who completed a diploma in culinary arts at Ferrandi Paris before working at several Michelin-starred restaurants including Epicure.

Benoit said: “The teams we’ve selected for you guys this year are amazing.

“The standard is expected to rise.”

He added: “Of course in every competition there is the element of time, time is tight and is the best way to see if they have a strategy and work well as a team.”

Bake Off: The Professionals is on Channel 4 on Tuesdays at 8pm. Catch up with the series so far on All4.

Have a go yourself at a full-day patisserie masterclass or chocolate heaven led by Benoit Blin at the Raymond Blanc Cookery School.