First published: 16 May 2019 by Quentin Gavignon 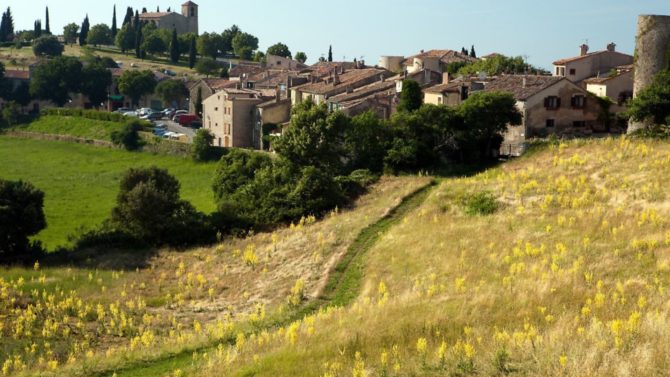 From Bargème to Bormes, you’ll want to add these picturesque villages in this Provençal département to your to-visit list

Located 36 kilometres north of Draguignan, Bargème sits at 1,097m and consequently is the highest village in Var. Nestled at the top of a rocky hill, the village offers the most beautiful panorama of the region. Castle enthusiasts will be delighted to stroll through the medieval part of the village and discovering the ruins of the feudal castle as well as its Romanesque church. Bargème is also the starting point of multiple hikes. One of the most famous is the ascension of the Brouis Mountain.

The commune of Bormes-les-Mimosas was only called Bormes for many centuries. In 1968, its name changed to Bormes-les-Mimosas due to the large amount of mimosas blossoming throughout the village. Bormes-les-Mimosas is known for its strong historical past. You can wander through the colourful streets before visiting the Saint-Trophyme Church and the Notre-Dame de Constance chapel, which overlooks the old part of the village. If you feel sweaty, you can cool down by reaching the beach of La Favière. You may also glimpse the president and his wife, since the Fort of Brégançon is their official retreat.

The commune of Gassin is often dwarfed by its globally famous neighbour Saint-Tropez. However, the village has several historic sites like the bulwarks protecting the city and the Notre-Dame de la Compassion chapel. Gassin has also a special street – if you can call it a street – the Androuno, which is one of the narrowest streets in the world. Don’t try to squeeze through, it is simply impossible.

Grimaud is a perched medieval village near Saint-Tropez but if it attracts many tourists, it is due to Port Grimaud which was built from 1996. The Venice-like harbour is divided into many small channels that meander and give a particular style to Port Grimaud. In Grimaud, you can also encounter the ruins of an old castle. From here you are rewarded with panoramic views over the coast as well as toward the neighbouring forests.

Like Bormes-les-Mimosas, the name of Le Lavandou originates from the flower lavender that is prevalent around the commune. The village is brimming with churches but it is more famous for the its large number of beaches. If you fancy strolling along the coast, it is possible to do so on a three-kilometre trail that offers wonderful views across the Mediterranean Sea.

Located in the north of the Var, Seillans overlooks the plain between the Southern Alps and the Esterel Massif. Seillans is a typical Provençal village. It is built on the side of a rocky hill and all the ochre houses seem to be stuck together. The medieval centre can only be discovered by foot and allow you to peacefully discover the village landmarks. Walk the cobbled streets and stop near the Font d’Amont fountain, then proceed to Saint-Léger church before finishing your stroll to look at the vestige of the old castle.

This picturesque village, far from all the hustle of touristic cities in Var, can be an unexpected destination for tourists looking for a more peaceful atmosphere. The village has well-preserved the vestige of its history. One of the castles has been turned into the town hall and the former church has become the entrance of the village. Tourtour manages to mix history with tourism to keep attracting more and more French and European vistors.

Previous Article Eurostar goes vegetarian with Raymond Blanc
Next Article Who is the French judge on Bake Off: The Professionals?