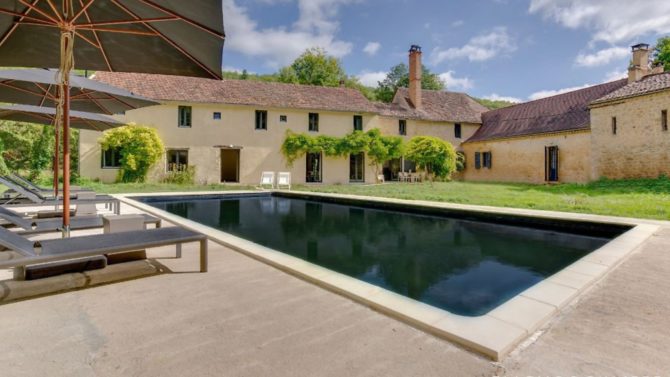 Not only is the property they ultimately bought a world away from Rebecca Randall and husband Greg’s original brief, they’re not even sure how they chose France in the first place, but they couldn’t be happier that they did

We decided we wanted to move to France about five years ago – in the pub over a bottle of wine! I can’t even remember how France came up, although I had spent a lot of time there when I was younger as an au pair and as part of my degree course. We knew we were getting to the stage where we were fed up with London and wanted to do something different. We didn’t want to still be doing the same thing in 20 years’ time, so we thought we’d just try it.

What was your original brief for your property search?

No major renovation. Don’t mind a bit of painting and decorating. Nothing too big. Obviously we ended up with the complete opposite! Good travel links with London were vital as I intended to continue working as a barrister in London, and we had also decided that they wanted to set up a gîte business. After many holidays spent exploring different parts of France, we eventually we settled on Dordogne in Nouvelle-Aquitaine.

So what did you buy in the end?

We bought a former paper mill located half an hour from both Bergerac and Bordeaux. It was a derelict shell with no internal walls, bathrooms or kitchen, and many of the floors were unsafe to walk on. We’ve preserved and made a feature of a well in what is now our kitchen, which we only discovered when Greg fell into it! We had no idea of the scale of the project we were taking on and it was a world away from our original brief.

How did you renovate it?

We had stayed at nearby Château Le Merle several times during our house-hunting trips to France and were introduced to Joris Van Grinsen, the designer responsible for creating the hotel’s beautiful interiors. Joris came to see the property and he couldn’t believe how big it was – he said it would be the biggest residential project he had ever worked on. He project managed the whole renovation and found an amazing team of builders who worked here for over a year because it was such a big job to bring Fontalbe back to life. We now have a beautiful two-bedroom home plus a gîte with six bedrooms, six bathrooms, a salon, kitchen and dining room, which we plan to start renting out this year. We’ve also created a space that we hope to use in the future as a yoga studio and for workshops and exhibitions.

Did everything go to plan?

With the renovation costs mounting and work needed that we hadn’t budgeted for, we had to find a way to spend more time on site without spending even more money on hotel accommodation. The builders seemed to have a question every five minutes so we really needed to be here and we couldn’t afford to keep staying in a hotel, so we bought a caravan and towed it down here from London, which was awful! However once we got here it was brilliant because it saved us a fortune, and it was great to be on site for the builders, and to actually be living here, even if it was in a caravan.

How to avoid the French property buying pitfalls

What was the inspiration for the interior design?

We wanted to retain as much of the building’s industrial past and as many original features as possible. Externally the property is everything you would expect from a traditional Dordogne building, while the inside is minimalist with open staircases, wooden struts, expanses of glass and crisp white décor. One of my favourite parts of the gîte is the 60ft-high entrance, although that did create its own challenges when it came to choosing furniture. Because it’s so big we had to scale everything up, otherwise it would have looked like doll’s furniture!

How have you furnished the gîte?

Luxury was a priority so we have high thread count Egyptian cotton sheets and quality towels, and we provide Honest skincare toiletries in the bathrooms – in full-size bottles. I used to hate going to places that provided miniature bottles of shampoo and shower gel – how is that supposed to last for a week? I’ve also made sure there are enough hangers in the wardrobes and enough cutlery and bowls for the number of guests in the kitchen. We bought the crockery in Ikea because I want people to feel comfortable rather than worry about breakages, but we’ve invested where it counts and spent money on items such as quality mattresses, pillows and bedding.

What’s next now that the renovation work is complete?

There’s so much work to do outside – the whole place is about 60 acres – but luckily Greg is very handy. This house throws us curveballs all the time. Apparently there used to be a trout farm here which the builders only discovered when they began digging for two new septic tanks and kept hitting more and more concrete. What should have been a straightforward job meant churning up 90% of our rather nice lawn, which now looks like a warzone! I’m enjoying the view of the new swimming pool though, with its striking modern black liner.

Was moving to France the right decision?

We both feel we’ll be in France forever. It’s just glorious and I think it’s actually better than we could ever have imagined. There were times when we thought we wouldn’t do it -couldn’t do it – and we wondered if we should have just bought a little holiday home, but then we stand and look at what we’ve got here and realise how wonderful it is.

From Brighton to gîte business in Brittany

Previous Article 7 majestic Gothic cathedrals to visit in France
Next Article Cash in the attic: A guide to French vide-greniers