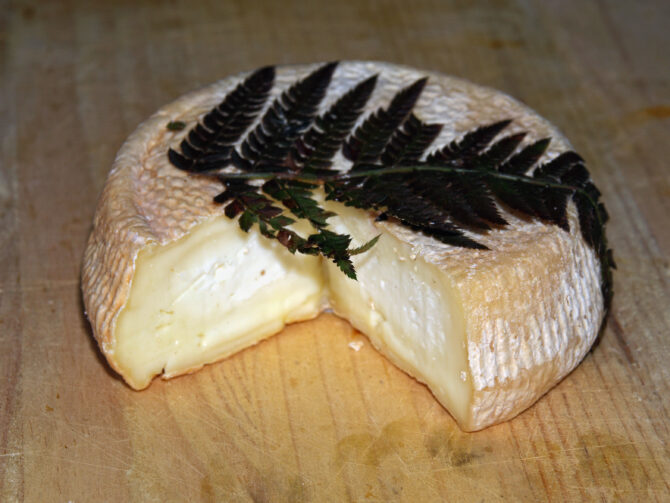 This unpasteurised sheep’s milk cheese shares its name with one of Corsica‘s most renowned polyphonic vocal groups. Both take that name from the fern that is this ravishing island’s indigenous symbol. To underline the point, the round medium-soft cheese comes with a sprig of the filetta embedded like a fossil within its stippled light-orange rind. It’s easily removed, though, unless you wish to share one of the elements of the local maquis, on which the sheep graze in the foothills of the central mountains around Taglio-Isolaccio, some 45km south of Bastia on the island’s north- east coast. Here, on the edge of the N198, Michel and his wife Laurence Mattei established their fromagerie artisanale in the 1980s. Their medal- winning A Filetta comes in two sizes, 330g and 220g, and two varieties, sheep’s and goat’s milk. Both are produced in the classic way, with a similar affinage of four to six weeks and fat content (of around 27%), but after tasting the former, I cannot believe that the latter can be this good.

It’s a subtle taste, noticeably milder than a fragrance characterised by quite a strong, slightly acidic whiff of brebis. The texture within the slightly salty, pleasingly crunchy rind is not unlike the squidgy firmness of that old supermarket staple, Port Salut. But any comparison ends there. Somewhat similar to a softer Etorki, there are all kinds of subtle flavours to pick out: above all, it’s clean and creamy. with discernible fruity, earthy, fungal and herbal notes. You wouldn’t want to swamp such subtle delights with anything too overpowering; a nice chilled tangy white, perhaps. Or maybe the only accompaniment needed is a touch of imagination: savouring an A Filetta, say, on a carpet of Corsican wild flowers in early spring. Well, one can but dream.

TasteofFrancemag.com is a celebration of French cuisine in all its forms. Savour local produce in characterful markets, tour France in search of new foodie experiences and enjoy classic French food, wine and recipes.

Previous Article Take a stroll in Brioude: A beautiful detour
Next Article The Isle of Saint Honorat off the coast of Cannes