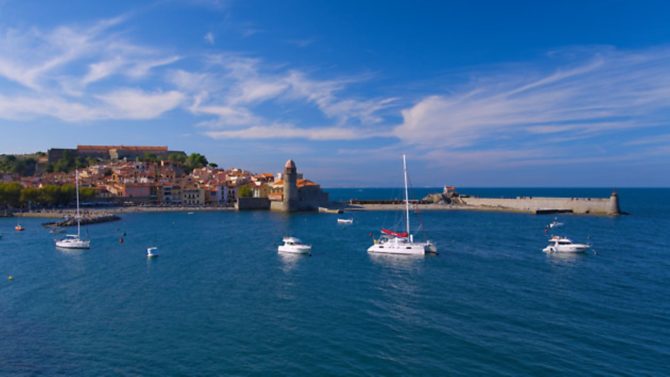 The most southerly of the 13 departments that make up the Occitanie region (formerly Langeuedoc-Roussillon and Midi- Pyrénées), Pyrénées-Orientales boasts a diverse landscape of Mediterranean coastline and foothills to the Pyrénées mountain range when exploring inland.

Prior to the Treaty of the Pyrénées in 1659, most of what is now Pyrénées-Orientales was part of the former Principality of Catalonia. Whilst exploring the department the sense of Catalonia is still prevalent; with Catalonian specialities including paella, cargols à llauna and calcots very popular among locals.

The department is popular with visitors and expats as it enjoys sunshine most of the year. Flights leave London Stansted regularly landing in the department’s capital, Perpignan and the TGV also stops in the city. The choice of landscape is a massive draw to Pyrénées-Orientales; mesmerising views of the region can be enjoyed from the top of Mont Canigou, pretty towns such as Collioure exude culture and there’s plenty of opportunity to relax on the golden sands along the department’s coastline.

Plane: There are flights from London Stansted to Perpignan

By train: After getting the Eurostar to Paris, jump on the TGV to Perpignan

By road: Perpignan is 1134km from Calais

Places to visit in Pyrénées-Orientales

The department’s capital, and the last major city in France before the Spanish border, Perpignan was once Catalonia’s second city after Barcelona and it continues to feel as much Catalan as it does French, despite being transferred to France in 1659. The vibrant city today is a mix of wide boulevards and winding streets and is the setting for the lively Estivales festival in the summer.

Pyrénées-Orientales is home to five Plus Beaux Villages (France’s prettiest villages): Castlenou, Eus, Evol, Mosset and Villefrance-de-Conflet. The latter was fortified by the famous French military engineer Vauban, and is the departure point for the Little Yellow Train through the Pyrénées. A trip aboard The Little Yellow Train of the Pyreenes is a must; the line rises through the department’s dramatic scenery showcasing spectacular views of the rocky mountainous landscape, pretty villages, two historic fortresses and the Hermitage de St Antoine-Galamus buried below the cliffs.

The area is also home to the town of Céret, which is considered to be one of the birthplaces of Cubism; its Musée d´Art Moderne features a number of works by iconic 20th-century artists including Picasso, Matisse and Chagall. After admiring the modern art, there’s plenty of charming cafes to refuel with a local delicacy.

Things to do in Pyrénées-Orientales

Prats-de-Mollo is a pretty town full of narrow cobbled streets with plenty of hotels, restaurants and cafes to unwind after exploring. After a stroll through the town, why not visit Fort Lagarde? The imposing fortress of grey stone is on top of the hill is accessed by a tunnel from behind the town’s church. Enjoy the walk up learning about the fort and town’s history, and soaking in the stunning views.

The Fort de Salses, an important defensive castle of the 16th century, once guarded the former frontier between Spain and France. Its layout and architecture, innovative for the time, presents a rare example of the transition between a medieval castle and the fortresses of the modern period. Enjoy a guided tour where you can learn a little more about the castle’s rich history or explore yourself and admire the stunning architecture innovative of its time.

Among the wonderful scenery Pyrénées-Orientales has to offer, the striking rock formations at Ille sur Tet are worth a visit. A short distance south of the picturesque Plus Beaux Village of Castlenou, the ‘orgues’ as they known as have formed an amphitheatre of ‘organ pipe’ shaped rocks standing 12 metres high.

Local specialities reflect the historic Catalan presence in the department, therefore dishes such as paella, cargols à llauna and calcots are popular while Banyuls is renowned for its fortified Grenache-based dessert wine. Visitors are likely to encounter lots of seafood with Collioure being famous for its anchovies.

Expats looking for French property are drawn to Pyrénées-Orientales for its proximity to stunning Mediterranean coastlines and the foothills of the Pyrenees mountains. This is one of the few French departments where homeowners can enjoy vigorous hikes and breathtaking views in a mountainous landscape alongside relaxing upon a golden beach. There are plenty of popular property styles in the region from mas, traditional farmhouse properties of southern France, newly-built villas based near the coastline and small holiday homes a stone’s throw from the beach.

You can find properties in Pyrénées-Orientales for sale on the France Property Shop website.

Outstanding vineyards in France you have to visit