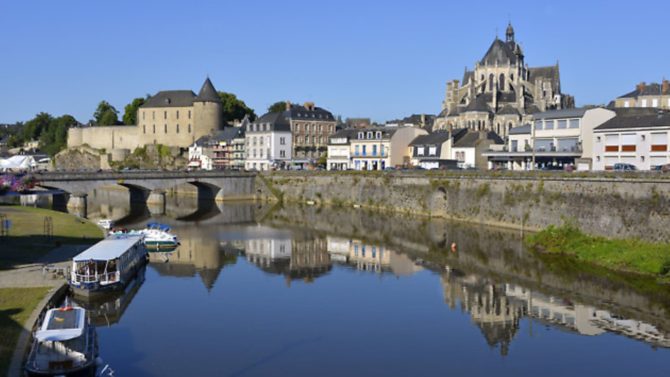 An insider’s guide to Mayenne in Pays-de-la-Loire, including the main attractions to visit on holiday, the best towns and villages to live in, the major festivals and events, and buying property in Mayenne

Sandwiched between Normandy link to and the Loire Valley, the department of Mayenne in Pays-de-la-Loire is named after the river that meanders through it. A key trading route for the area for many years, the main towns of Laval, Mayenne and Château-Gontier developed as people settled beside the river.

The temperate climate, charming countryside villages dotted with picture-perfect cottages and the laid back pace of life appeals to holidaymakers and expats after a second home. Mayenne prides itself on rich greenery and delightful scenery, and is steeped in history so there is plenty to explore while there. The 100km-long towpath running alongside the Mayenne River, which has now been given a new lease of life as part of the Loire à Vélo cycle trail, and is the perfect place to enjoy a relaxing ride or a stroll soaking in the riverside views.

Plane: The nearest airport is in Nantes in the Loire-Atlantique department

By train: After getting the Eurostar to Paris, jump on the TGV to Laval

By road: Laval is 464km from Calais

Places to visit in Mayenne

Mayenne’s capital Laval is a picturesque medieval town, and with its majestic château, ancient bridge and series of ramparts and towers is an ideal place to explore on foot. A stroll to the Jardine Botanique de la Perrine, with its English-style rose garden and memorial to Laval-born painter Henri Rousseau, and views over the Mayenne River are not to be missed. Visitors can hire a boat to gently explore the surroundings and try to picture the scenes of battles past that took place there.

Château-ferme de Laval, dating back to the 12th century, is a must see when visiting Laval with plenty of local history to be learnt while soaking in the architecture and exhibits. Wonderful views across the Mayenne rooftops can be enjoyed from the top of the castle tower. The medieval castle is also home to the Musée D’art Naïf which boasts a stunning collection of works inspired by the 19th century art of local artist Henri Rousseau. If you leave Laval via the towpath, you soon reach the peaceful Basilica of Notre-Dame d’Avesniéres – the town itself hums with activity: cosy cafes and enticing boutiques await on the Rue du Pont de Mayenne.

In the south of the department you’ll find Château-Gontier, a town that has grown up around its impressive fortress. Château-Gontier is best known for the delightful 11th-century frescoes found inside the Romansque St. Jean Baptiste church and for playing host to the largest veal market in the whole of Europe every Thursday morning.

Things to do in Mayenne

To the north of the department part of the Parc Naturel Régional de Normandie et Maine can be found. The second largest marsh in France, spanning four departments, is packed with wildlife and is spread over several thousand acres of deep forests and steep hills just waiting to be explored. Immerse yourself in the beautiful scenery with a vigorous hike or a peaceful stroll.

Perched at a height of 70 metres above the Evre valley, and located to the east of Laval, is the Plus Beau Village of Ste-Suzanne, renowned for resisting William the Conqueror’s attempts to capture it in the 11th century. The area hosts the Festival des Nuits de la Mayenne and the Festival des Trois Èléphants, which means there’s plenty to do and fun to be had throughout the year.

Just a short distance from the medieval village is the Dolmen des Evres, a monument from the megalithic period which shows incredibly early signs of human existence in the Mayenne. The interesting stone structure is worth visiting while in Ste-Suzanne.

First created by monks, the popular semi-soft cheese Port Salut is still prepared by ancient techniques, made using pasteurised cow’s milk and proves to be a much-loved delicacy in Mayenne today. Other regional dishes include buerre blanc sauce, made using butter with vinegar and sometimes white wine.

A largely agricultural area and undoubtedly one of the most unspoilt parts of the Pays-de-la-Loire region, Mayenne is popular with expats looking to move or a second property due to its laid-back pace of life. There’s a wide range of property styles; from longére houses reminiscent of Brittany properties with slate roofs, exposed stone and beamed properties and the sought-after, charming chaumière houses which are typically built with local materials.

You can find properties in Mayenne for sale on the France Property Shop website.

Starting a business in rural Mayenne