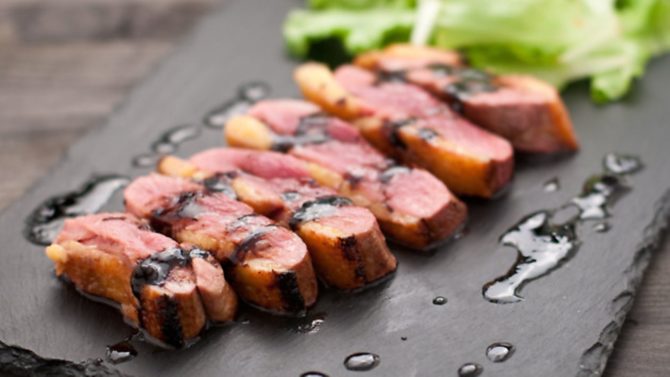 A speciality of south-west France, magret is the breast of a duck or goose that has been fattened for foie gras and is France’s favourite dish. Coated with a thick layer of fat, it has the meatiness of steak, but a deeper character reminiscent of game. If it has quickly become a standard dish in the French repertoire, magret was officially defined only in 1986; those originating in south-west France come with an IGP (Indication Géographique Protégée) label that guarantees the animals are raised according to strict standards. Because few geese are raised for foie gras, goose magret is rarely seen, while the duck version appears in most supermarkets.

Duck magret requires few special skills in the kitchen. The key is to cook it slowly, allowing the thick layer of fat to melt off and a thin crispy layer to remain. Before placing the magret in a pan, I score the fat at least halfway through with a very sharp knife and rub it with some coarse salt. The duck should be straight out of the refrigerator for this, as the fat will quickly grow soft and difficult to slice at room temperature. I also turn the duck breast upside-down and trim off any excess fat and nerves from the flesh side.

Though some people like to start the cooking in a pan and finish it in the oven, I have always cooked mine entirely in a frying pan, leaving it on the fat side until this has turned deep golden. The pan should be cold when you add the magret, so that the fat melts gradually over low heat. The only high-maintenance part of this dish is removing the excess fat with a spoon – one magret can produce a good half-cup of fat, which should be saved for sautéing potatoes, keeping in mind that the people of south-west France have historically had the highest life expectancy in the country.

Once cooked on both sides but still pink in the centre, the magret is ready to receive just about any flavour you might throw at it, though fruit (especially figs or berries), honey, balsamic vinegar and warm spices seem to work best. Though duck is not native to Provence, it makes an excellent match for the local chestnut honey, whose slight bitterness takes the edge off the sweetness. In my favourite recipe ground aniseeds add another southern French touch, while soy sauce mixed with balsamic vinegar creates a sweet-salty taste reminiscent of Chinese duck dishes. At this time of year, I serve this duck with fresh figs roasted with a little more of the honey and panisses, a kind of chickpea chip found in Nice and Marseille.

The enticing markets of south-west France

1. Trim the excess fat from the duck breasts and score the fat in a criss-cross pattern. Season both sides with salt and pepper.

2. Combine the honey with the soy sauce, 1tsp of balsamic vinegar and green anise powder.

3. Heat a non-stick pan over medium heat without any added fat and place the duck breasts, skin side down, in the pan. Turn the heat to medium-low and let the duck cook slowly until the skin is well browned (about ten minutes), spooning off the excess fat into a bowl. Turn the duck breasts over and cook on the other side for about five minutes. The duck should still be pink inside. Set aside, covered, in a warm place.

4. Discard any excess fat from the frying pan and add the honey mixture, over medium heat. Put the duck breasts back in the pan and turn to coat with this mixture. Deglaze with the 2tbsp of balsamic vinegar.

5. Present the sliced duck on the plates with the accompaniment and drizzle the sauce around the plate.

Previous Article Where you can buy a property in France for under €100,000
Next Article Pyrénées-Orientales guide