How to spend a day in Collioure in Occitanie 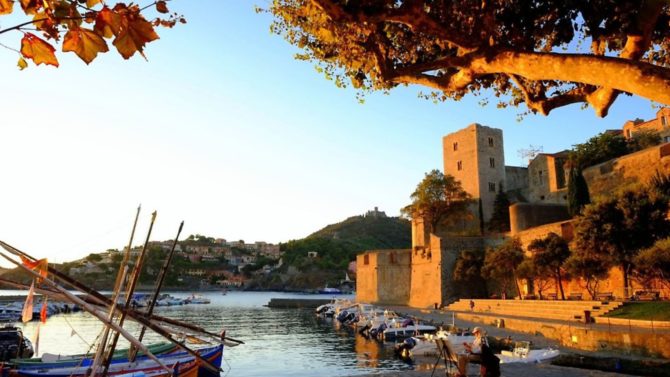 No visit to Pyrénées-Orientales is complete without a trip to the colourful coastal town of Collioure – here’s how to make the most of everything it has to offer, from famous art to fabulous food and wine

There’s art everywhere in Collioure, from the art galleries and workshops to the museums and even the walls of the town itself. Matisse discovered Collioure in 1905 and was instantly captivated by the town’s ‘special light’, which inspired him to put brush to canvas. He was soon joined by fellow artist André Derain and together their work marked the beginning of the Fauvism movement – follow the Chemin du Fauvisme walking trail to see the locations that featured in their famous works. Other painters and artists followed, including Raoul Dufy, Charles Rennie Mackintosh and Picasso. Stop to take in the view through one of the strategically placed empty picture frames that allow visitors to visualise a scene as the painters would have seen it, and pay a visit to the Musee d’Art Moderne and the Maison du Fauvisme.

The family-run Hôtel des Templiers on Quai de l’Amirauté, and see some more art at the same time. The bar walls are lined with over 2,000 works of art that bear witness to the many artists – Picasso among them – that have passed through here over the years.

Visit the Château Royal, built by the Knights Templar in 1207, and the striking Notre-Dame-des-Anges church with its bell tower that was originally built as a lighthouse, both of which dominate the bay. Then there’s the 14th-century Le Moulin, one of the oldest windmills in the area and now used as an oil mill, and the Tour Madeloc, a 13th-century hilltop watchtower. Take Le Petit Train Touristique through the vineyards surrounding the bay up to Fort St-Elme, where it stops to allow passengers to hop off and enjoy the very impressive panoramic view before returning to Collioure via the fishing village of Port-Vendres.

Learn about the local wine at….

A guided tasting at Cellier des Dominicains. Take a tour of the cellar and see the vast wooden barrels before returning to the tasting room to sample the Collioure and Bayuls AOC reds, whites and rosés.

Anchois Roque, founded in 1870 and passed down through five generations of the Roque family. Anchovies have played a vital role in Collioure’s economy for hundreds of years and Anchois Laroque preserves both a local tradition and a family one. Upstairs the filets are prepared by hand using the traditional salting methods – there’s no assistance from modern machinery and the employees’ deft hand movements are mesmerising to watch. The anchovies are then laid out on trays before being placed in jars which are sold in the shop downstairs. The end product is a far cry from the sort of anchovy you might be more accustomed to finding on a pizza, so even if you think you’re not a fan it’s worth giving them a try.

Derrière Le Clocher on Plage St Vincent and enjoy the traditional Catalan dish fideuà, similar to paella but made with short spaghetti-like pasta instead of rice, with a chilled glass of Collioure white or rosé wine. It’s full of all the seafood you could possibly want (king prawns, clams, octopus, mussels, squid), which is so fresh it could almost have jumped straight from the sea to your plate.

La Teranga, which means ‘hospitality’ in Senegalese, where you can be sure of a warm welcome from Fred and Mami. Senegalese chef Mami’s colourful and creative menu shines a spotlight on fish and seafood, while the too-good-to-resist desserts include crème catalane, and sabayon with roasted strawberries. The couple previously had a small restaurant in the town centre but have now moved to a larger space at the Hôtel l’Arapède.

Stay the night at….

Mas des Citronniers, located in the centre of Collioure and just a short walk from the beach. There are a number of bedrooms within the main hotel while the Pavilion rooms are located in a separate building to the side. Each one has its own terrace to sit out on and enjoy the view of the surrounding lemon trees.

A guide to the Occitanie region

Previous Article In pictures: Château and gardens of Chaumont-sur-Loire in France
Next Article French vs UK Inheritance Tax