Holiday in France: Explore the Mediterranean resort of Sète 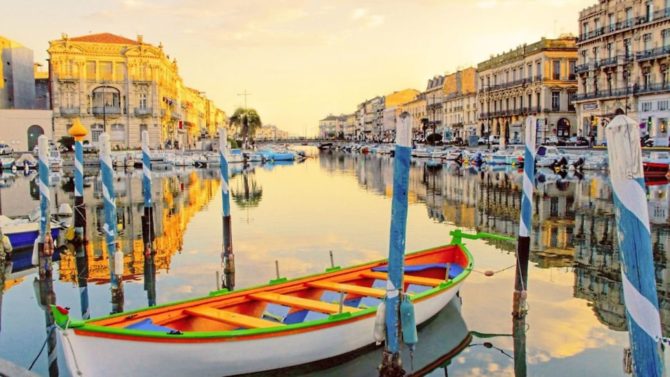 Between the Mediterranean and the Étang de Thau, Sète in Hérault is a vibrant port town overflowing with contemporary art and the finest seafood

Marseille grabs all the headlines and Cannes has all the Côte d’Azur glamour, but Sète has something different: soul. The portside town in the Hérault department offers an authentic taste of Mediterranean lifestyle. It may be a bit rough around the edges but its sunny, laid-back ambience and long sandy beaches have served as a beacon for arty types over the years. A burgeoning fascination with modern and street art, linked to the art scene in neighbouring Montpellier, is the latest manifestation.

What should I see and do in Sète?

The town was transformed in the 17th century after King Louis XIV deemed the sleepy fishing village to be the place where the Canal du Midi would join the Mediterranean, establishing a bustling commercial trading port. This seafaring spirit remains key to Sète today and it’s still the only place in France where you can take a ferry to Tangier in Morocco.

My stroll around the compact centre starts from the tourist office on Grand’Rue Mario Roustan and leads north towards Les Halles, which has all the quintessential flavours of the Mediterranean: olives, fresh pasta and oysters from the harbour (Wednesday to Sunday, 7am to 1pm). There are a host of stalls for grazing on the hoof, notably Halles et Manger for tapas-style treats.

The nearby Place Léon Blum, with its striking octopus fountain in front of the town hall, hosts a lively flower market on Wednesday morning, the main market day in Sète. From here, head towards the sea, stopping on the corner of Rue du Palais at La Cettoise, a hole-in-the-wall artisan bakery preparing tielles, Italian-style flatbreads.

From here, walk uphill to the Quartier Haut, the original settlement for the port workers. Many Italian families settled amid the maze of narrow streets during the 19th century as the port expanded, adopting the Virgin atop the Church of Saint-Louis as their emblem. She continues to tower over the port and has traditionally kept watch to ensure the safe return of seafarers. Today, however, the ramshackle streets are home to an international community from across Europe, many of them artists attracted to the Mediterranean setting. The sun-bleached facades of the area are adorned with colourful street art as part of a citywide arts project.

Heading downhill to the Old Port, the Saint-Louis pier leads out towards the lighthouse, where you can climb the steps for a panorama over the town’s maritime domain. The 650m jetty was built in the 17th century and named the Mole Saint-Louis after the Sun King. At the end of the pier is a small cross where the fishermen still bless themselves before going to sea.

The Old Port may no longer be a commercial hub but it remains a popular day-port stop for visiting cruise ships. Beyond the seaman’s cemetery, as immortalised by the local poet Paul Valéry and the Musée de la Mer, a long sweep of sandy beaches leads along the coast towards Marseillan. But I’m following the waterside promenade back towards the Tourist Office. This walkway was known as the Cul de Boeuf until the late 19th century, a reference to the ‘oxen boats’ that moored here. The boats hauled their nets in pairs like oxen pulling a plough, a popular fishing technique from the 18th century.

This is the departure point for boat trips to the Thau lagoon, where shellfish farms remain the major industry. The lagoon yields some 13,000 tonnes of oysters per year – 90% of Mediterranean shellfish production. The town made its fortune from the sea and it remains key to its Mediterranean soul.

For more information about sunny Sète, visit en.tourisme-sete.com or herault-tourisme.com.

Armchair travel: 21 virtual tours in France to try in 2021

Previous Article What are the laws on carrying out building work in France?
Next Article French property: Should I buy in Dordogne or Corrèze?