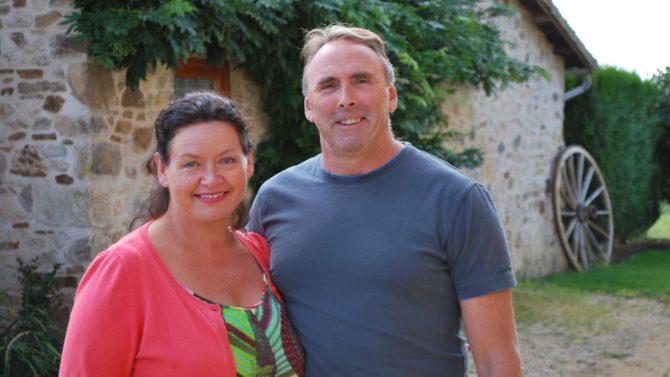 In the latest series, British couples who moved to France were revisited to see if they are still living the dream

Intrepid expats who have moved abroad for a better life and to set up businesses in a sunnier climate have been sharing their successes and challenges in A New Life in the Sun.

In the latest series of the Channel 4 show, A New Life in the Sun; Where Are They Now? several families were revisited to see if they were still enjoying their new life in France or had decided to leave for good.

They included former finance director Ali Fontaine and partner Huard, from Jersey, who moved to the village of Oradour-sur-Vayres, in Haute-Vienne, in 2016. The couple bought a large farm with a four-bedroom house, a barn and three self-catering gîtes which were in need of renovation.

To save money, they did the majority of the work themselves, including renovating the barn to transform the entire site into a holiday home complex offering a luxury country retreat experience.

Since first appearing on A New Life in the Sun, their second season got off to a great start and the barn has also been completed, with Ali briefly returning to Jersey to take on a freelance finance job to fund the final renovations.

“We’re loving it and we just want to carry on enjoying it,” said Ali.

“I love the French friends we’ve made and the neighbours we have – if you have an issue they will be there at the drop of a hat.

The show also caught up with former driving instructor Richard and teacher Carole Hedditch-Grey, who swapped Chelmsford, in Essex, for a holiday cottage in Aubeterre-sur-Dronne in Charente in 2015.

The couple successfully completed their renovations in time for their first guests, with the help of local workmen. Over the next few years they went on to build a thriving business and a successful new life for themselves, but decided to give it up to return to the UK to care for their elderly parents. They sold their gîte for a profit, paid off their debt and are now living in the Cotswolds looking after a large manor house.

After spending four years living in France, however, the couple aren’t giving up on the idea of moving abroad again in the future.

“We’re definitely not done living abroad, we’re just back momentarily,” Carole explained. “We wouldn’t be anywhere else at this moment in time, but we have definitely been bitten by the bug of living abroad. We will definitely do it again.”

A New Life in the Sun: the British expats in France who became TV stars

Over in Dordogne, Jo Gell and Alice Barnett left London to set up a restaurant in Verteillac in 2015. They bought an old farmhouse building with four acres with the dream of turning it into a fine dining restaurant with a bed and breakfast.

Since then the restaurant – à table – has gone from strength to strength and they have branched out to cater for weddings too.

When A New Life in the Sun came calling again, it found Jo and Alice were still in business having enjoyed their fourth season last year. The couple now hold marriage ceremonies, as well as receptions and have invested €8,000 in a new marquee.

Jo said: “I’m very proud of what we’ve achieved here, we’ve built it up and we’ve made it a business.”

Alice added: “We used to live in London and get on the Tube every morning and we do remind ourselves how lucky we are.”

Catch up with A New Life in the Sun: Where Are They Now on All4.

A-Z of buying a French property