Flying saucers in France: A history of UFO sightings 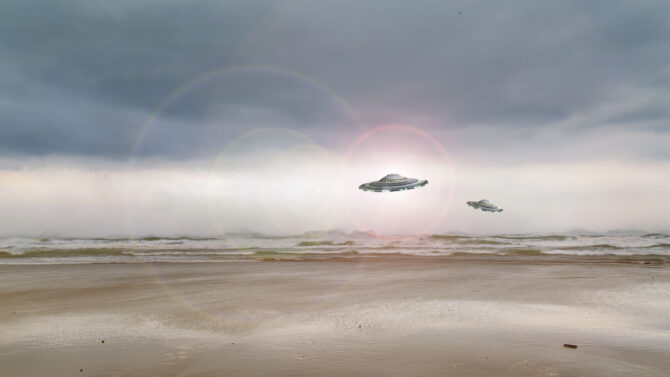 The truth is out there somewhere, but only the French are still searching for it, reports Robin Gauldie

The world pretty much assumed that when the first little green man stepped out of a flying saucer his first words would be “Take me to your leader”, not “Amenez-moi à votre chef“- which could, let’s face it, have led to some confusion.

From the long-debunked ‘Roswell Incident’ of 1947 to movies like The Day the Earth Stood Still (1951) to E.T. The Extra-Terrestrial (1982) and the 1990s cult series The X-Files, it was pretty much taken for granted that aliens would make their first landing in the Nevada desert, Washington DC, a Californian suburb, or even the North Pole – not in a Provençal village. But Trans-en-Provence, around 5km from Draguignan, was, in 1981, the location of France’s most celebrated flying saucer sighting.

On the afternoon of 8 January, Renato Nicolaï had what can only be described as a close encounter with a UFO. Monsieur Nicolaï’s account (which you can read in full at ufoevidence.org and on the GEIPAN website) makes interesting reading, whether you’re a sceptic or a true believer. Around 5pm on 8 January 1981, he was working outside his house when he heard “a sort of faint whistling”.

“I turned around and saw a device in the air at the height of a big pine tree at the edge of the property,” he later told the local gendarmerie. The device landed, then lifted off, “still emitting a slight whistling sound,” M. Nicolaï said.

“At that instant, I was about 30 metres from the landing site. I went to the spot and noticed a circle about two metres in diameter. At certain places along the circumference of the circle were traces like abrasions.” The device, M. Nicolaï said, “had the shape of two saucers, one inverted on top of another. It must have measured about 1.5 metres in height. It was the colour of lead, with a ridge all the way around its circumference”.

Sounds like your typical 1950s-style flying saucer, then. The retired farmer went on to have a modest movie career, appearing (as himself) in a trio of documentaries made for French and international TV, including Monde et Mystères (1995), Les Chercheurs d’OVNIS (1996) and Out of The Blue (2003).

Unlike most sightings, M. Nicolaï’s flying saucer left physical traces. Investigators found scorched earth and marks that seemed to show that a heavy object had compressed the ground where the farmer had seen the object touch down. A two-year investigation came up with no convincing explanation.

M. Nicolaï was not the first in France to report a close encounter with alien beings. In 1954, railway worker Marius Dewild, claimed to have seen two small, space-suited figures who disembarked from a ‘cigar-shaped’ flying machine which landed outside his home in Quarouble, in Nord. His story set off a flood of other reports of ‘cigares volants” and even led the municipal council of Châteauneuf-du-Pape to pass a bylaw banning such craft from local airspace to protect the region’s precious vineyards.

But France has not abandoned its quest for the truth behind sightings of ‘Objets Volants Non Identifiés‘. I trust I don’t need to translate that for you.

Most sightings are less enigmatic than those reported by Renato Nicolaï and Marius Dewild, according to its director, Roger Baldacchino, who says his team manages to explain some 60% of cases.

In November 2019 GEIPAN was bombarded with phone calls and emails from witnesses who said they had seen a ‘luminous ball’ passing over parts of central and southern France. “We received about 30 emails in the evening and five phone calls describing more or less the same thing: a luminous ball in the sky with a sort of halo around, moving in a north-west to south- east direction, in Ardèche, south of Lyon or seen from Marseille at around 5.50pm on 11 November,” said M. Baldacchino.

In this case, the GEIPAN team concluded the mystery object was indeed a spacecraft – but one that originated on Earth. The same day, the US company SpaceX had launched a Falcon 9 satellite-carrying rocket from the Kennedy Space Centre in Florida. At the end of its mission, its course as it burned up on re-entry from orbit took it over France at around 5.50pm.

Mistaken identity: Is it a plane? Is it a satellite? Or is it a UFO?

Other OVNI sightings can be explained even more simply. In 2020, two observers reported ‘balls of lights’ flying in clusters above their home. A search of Google Maps and a phone call to the local village hall quickly identified them as clusters of illuminated balloons that had been released to celebrate a wedding.

Other reports can be put down to sightings of satellites (there are as many as 7,500 in orbit, many of them launched from France’s space centre at the Kourou spaceport in French Guiana), the orbiting International Space Station, aircraft vapour trails and lenticular (saucer-shaped) cloud formations. But according to M. Baldacchino every reported sighting is taken seriously and investigated thoroughly.

According to GEIPAN, almost 3,000 cases have to date been investigated by the agency, with more than 1,000 in 2020 alone. Of these, 672 have been ‘perfectly identified’, 1,176 have been ‘probably identified’, 976 remain unidentified due to lack of data’ – and only 99 remain as unexplained ‘D cases’. GEIPAN’S website even includes a step- by-step guide to reporting your OVNI sighting.

“We had a case where they were reflections of Christmas tree decorations,” Roger Baldacchino says. “Some people come and say, ‘I saw a spaceship’. We understand that they can say that. Our job is to explain the strangeness.”

There are as many as 7,500 satellites in orbit – some are mistaken for other-worldly crafts – Wikimedia Commons ESA

As seen on your screen

Like other real-world UFO investigation teams, GEIPAN has inspired a cult TV series, OVNI(s). Launched in 2021 by Canal+ and set in the 1970s, it follows the exploits of a team of investigators led by rocket scientist and UFO believer Didier Mathure as they investigate inexplicable events ranging from a rain of pink flamingoes to an alien intelligence seeking to make contact.

It’s a very French, tongue-in- cheek hommage to Mulder and Scully, TV’s most famous UFO- hunters. Even its catchphrase “When one sees more, one wants to believe…” tips its hat to The X-Files. With its dodgy facial hair, Elvis-style aviator shades and cheesy suits, is OVNI(s) anything like the real thing?

Unlike its fictional counterpart, GEIPAN does not dabble in the paranormal or the search for extraterrestrial intelligence – although Roger Baldacchino, who also appears as himself in a 2020 docudrama, Flying Saucers – a State Secret, met the OVNI(s) team often to lend his expertise to the series, which he describes as ‘offbeat and fun to watch’. He also expects GEIPAN’s phones to ring even more often as the series increases public interest in lights in the sky.

No cigares volants have thus far been sighted over Châteauneuf-du-Pape. GEIPAN now officially refers to OVNIs as ‘Phénomènes Aérospatiaux Non Identifiés’, just as the Pentago now calls UFOs ‘Unidentified Aerial Phenomena’. But whatever we call them, whether they are out there or not remains an open question. GEIPAN’s team will keep watching the skies…

How about taking a look at 13 of the most haunted places to visit in France, or these four abandoned villages and ghost towns?

Lead photo credit : Could there be UFOs above the skies of France? - maxime raynal Wikimedia Commons

Previous Article A Year at the French Farmhouse: I wrote a book about living in France
Next Article 4 French properties that are cheaper than a year’s rent in London