4 haunting abandoned villages in France and their stories 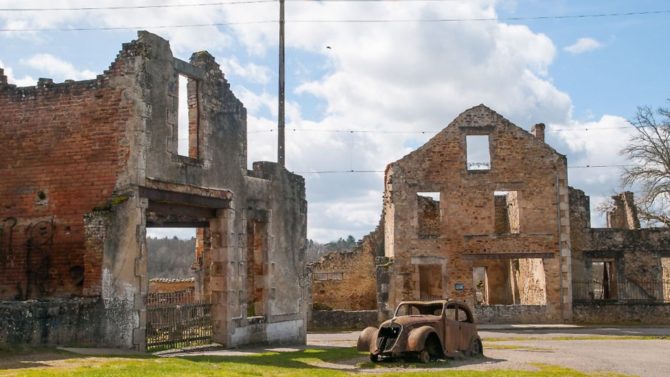 Perhaps France’s most well-known abandoned village, the ruins of Oradour-sur-Glane are shrouded in tragedy. This once-thriving commune, around 15 miles north-west of Limoges in bucolic Haute-Vienne, was part of German-occupied France during the Second World War. On 10 June 1944, near the end of the conflict, a Waffen-SS unit massacred 642 residents, including many women and children – almost the whole population of the village. The soldiers then looted and destroyed the buildings, sending barns up in flames and throwing grenades at the church.

After the war, a new village was built nearby (now with over 2,000 residents), while the old village – now known as the Village des Martyrs – remained as a permanent memorial and museum under instruction from President Charles de Gaulle.

You might not expect a ghost town just over 12 miles from Paris, but Vieux-Pays near Goussainville is just that – and there is Paris-Charles de Gaulle to thank for it. The airport was built in 1972 and Goussainville was directly in its flight path. The constant droning of planes above shattered the tranquility of the peaceful commune and many residents abandoned their homes for quieter residences – some moving without even selling up. The following year, tragedy struck when the high-speed Tupolev Tu-144 plane crashed in the village during the Paris Air Show, killing all six people on board and eight local residents on the ground. More inhabitants left, leaving just a stubborn few – nowadays joined by some squatters. The airport bought some of the abandoned buildings, promising to maintain them, but they were left to decay.

Today, Vieux-Pays has pockets of activity and ruin – among the shops that are still open are a supermarket and a lovely secondhand bookshop. But the stunning, 19th-century ruined mansion and the spooky, empty houses are a sad reminder of the community who once called it home.

In 2012, an entire village deep in the Limousin countryside went under the hammer – with a measly guide price of €300,000. The Haute-Vienne hamlet of Courbefy prospered in the Middle Ages but it succumbed to France’s rural exodus and its last residents left in the 1980s, leaving it abandoned. Various projects to rejuvenate it fell through until a wealthy South Korean-born artist called Ahae purchased the lot of 21 ruined buildings, among which are a ruined castle, a small chapel, a swimming pool, stables and dungeon, for €520,000. Ahae had seen the village on CNN and wanted to set up an “environmental, artistic and cultural” project in the village.

In a shocking twist, Ahae was found dead in a field south of Seoul in 2014 after being accused of embezzlement and tax evasion by South Korean authorities. The hamlet is still in the possession of his company. In 2016, the beneficiaries of Ahae’s estate confirmed that they still wanted to continue with his project, but as of yet it has not come to fruition.

When the shores of Lac du Salagou arrived at the foot of the Hérault village of Celles, residents were understandably concerned. The lake was created by a barrage made from 1964-1968, and there was a plan to raise the lake’s water level in two stages. The first stage, raising it to 139m, saw the water reach the edge of the village, perilously close to the houses, while the second stage, raising it to 150m, would have seen it submerged. Faced with this threat, the villagers decided to abandon their homes and the vineyards – but the second stage never came to fruition. In the following years it was left to rack and ruin, with photographers and urban explorers finding plenty of inspiration.

But in 2017, a plan was launched to repopulate the village in time for the 50th anniversary of its abandonment in 2019. Lo and behold, in September 2019, 119 new residents made Celles their home and new life has been breathed into this forgotten corner of France.

13 of the most haunted places to visit in France

Previous Article Escape to the Château: DIY captures ups and downs of life in a medieval French château
Next Article QUIZ: How well do you know Paris?