Escape to the Château: DIY captures ups and downs of life in a medieval French château 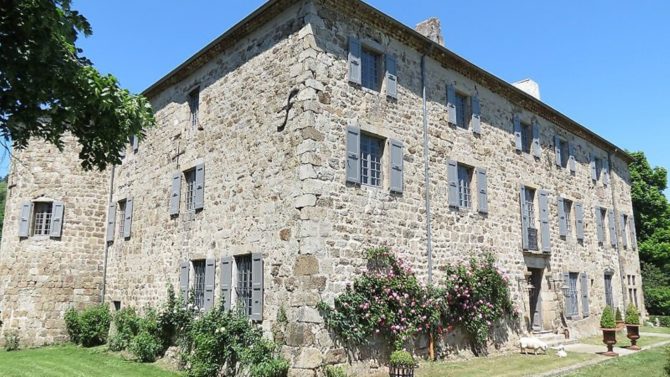 Escape to the Château:DIY is back for a third series visiting more Brits who run a château in France, including the owners of Château de Rosières en Vivarais in Ardèche

French château owners Dick Strawbridge and his wife Angel are back on our screens with a new series of Escape to the Château: DIY.

The entrepreneurial couple, who record their family’s adventures at Château de la Motte Husson in Mayenne for Channel 4’s Escape to the Château, pay a visit to Norfolk-born Amy Dean and her French husband Marc De Dinechin, who live at Château de Rosières en Vivarais, in Saint-Félicien.

The couple are planning to open their medieval château, in the heart of rural Ardèche, as a high-end B&B and yoga retreat. The impressive château has around 32 rooms and is surrounded by a complex of large barns, outdoor farm buildings, two derelict houses and former coach house.

Why did you decide to undertake this project?

We met by chance in 2013 on a tiny volcanic island in the Caribbean, after Marc had given up his job as a penguin researcher and I had resigned as a civil servant, both looking for new lives. I had decided to try to write for a living and Marc had set up a hydroponic lettuce farm on Montserrat. We married a year later. We had recently inherited some money and we decided it would be prudent to find a little house in Europe to give us somewhere to retreat to.

As with most of our decisions we let the wind take us, and our vague, fuzzy plan of roaming Europe to find a hideaway swiftly came into focus when we were shown Château de Rosières. All of a sudden we could see our future and a way of fulfilling all of our ambitions – some of which we didn’t even realise we had – while living in a gorgeous place. Rosières had the space for me to develop my long-harboured dream of setting up a yoga centre and the land around it gave Marc unlimited scope for his farming ambitions.

How much did the château cost and when did you buy it?

What has been the most expensive element so far?

Given the size of the property and the land, we have had a lot of big initial outlays such as farming and forestry equipment, plus the emergency repair of a couple of roofs. The most expensive single element so far however has been the enormous wood chip heating system that we’re currently installing.

How do you finance the château?

The château doesn’t yet finance itself, because we’re in the middle of huge renovations on all fronts. The vision we have is to create a working farm, including vineyards, and a retreat centre that will host yoga and wellbeing retreats, corporate retreats or other activities such as painting or ceramics retreats.

We will also open the gardens to the public (once they’re improved!) and hold events in a green amphitheatre we plan to build. Currently underway is a beautiful café in the old coach house that will be used to cater retreats, but also to open to the public.

The first project to be completed, however, is the renovation of the enormous, gorgeous master bedroom in the main château that will be used to host a limited number of exclusive luxury weekend experiences for individual couples.

We will have only around 10-12 of these per year and accept only one couple at a time so that we can pour all of our efforts and attention into looking after these guests. We will be offering this from 2020.

What has been the biggest renovation challenge?

Can we say everything?! It’s absolutely the hardest thing either of us has attempted in our lives. Not only the work, but living in the midst of it. One of the most surprisingly difficult challenges was the en-suite bathroom of the luxury bedroom.

It is very restricted in size because of old château walls, but we needed to make it luxurious enough to suit the master bedroom. What we discovered when we started to take it apart presented myriad problems and took us around nine months, much sweat, some blood and a few tears to solve.

How much work has been involved in restoring it?

Although some of the château looked quite presentable when we moved in, the top floor and most of the outbuildings were derelict and the main château had only two functioning bathrooms, neither of which were fit for purpose. In order to move forward with our dream project we had to not only remedy the derelict areas but also to pick apart the poorly-renovated areas and virtually start from scratch.

We spent a long time considering our plans before starting because we wanted to be sure before investing so much money, and we couldn’t start the renovations until we moved here full-time in 2018. This first year we have hardly stopped. We’ve had one holiday of three days and apart from that we work between six and seven days a week, all the hours of daylight and sometimes more.

We have tradesmen doing the skilled work, but we try to save money by doing as much of the unskilled work as possible ourselves. This is mostly demolition!

We also do all of the final decoration work and most of the less monumental projects such as the luxury bedroom and en suite. We’ve taught ourselves all manner of skills, from plastering to bricklaying and we love to experiment with traditional building techniques where possible.

How did you come to appear on Escape to the Château: DIY?

We met Dick and Angel on a book tour back in October 2018. We happened to be nearby and thought we’d pop in to say hello and how much we enjoyed the show.

By the time we walked out, they had persuaded us to share our project with the DIY show and a few weeks later we had a film crew battling the Ardèche winter to follow our first steps of renovation.

What can viewers expect from your episodes of the show?

Our episodes will show the very first projects that we tackled on the château, including the luxury B&B room and the renovation of our grand dining room, both of which came with some incredible surprises as we peeled back the layers of old renovations.

Viewers will also be able to see us tackle the first of our ambitious eco-projects in the form of a huge natural sewage system. We want to lighten the environmental footprint of the château and future business and we’re undertaking some substantial and fairly challenging projects as a result.

From having to change the caterpillar track on our enormous digger in the depths of winter, to laying tarpaulin during a dangerously hot heat wave, the enormity of this project will be captured during the show!

They will see what life is like deep in the French countryside and catch a slice of the ups and downs of living in a medieval French château and working farm.

Escape to the Château: DIY returns to Channel 4 on Monday 28 October (Monday-Friday, 4pm) for three weeks.

Escape to the Chateau:DIY returns to colourful Chateau de Lalande