First published: 6 October 2017 by Peter May 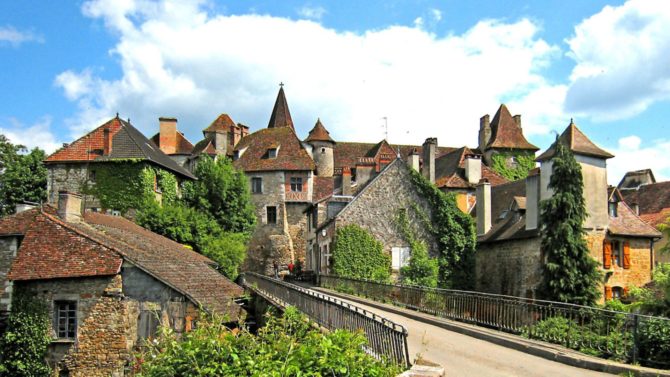 How did you discover the Lot department in France?

I first stumbled upon the corner of France that I now call home purely by accident. And I suppose there was also a modicum of ignorance involved.

I was 26 years old, and taking my family on holiday to France in a campervan – my wife, my daughter who turned three during the trip, and my mum and dad (retired). The lack of knowledge that fate had bestowed upon me was a complete ignorance of the fact that Paris self-evacuates on 1 August and heads for the Atlantic, Mediterranean and Channel coasts.

We just happened to land in Calais on 1 August, 1978, and very quickly found our progress west towards La Rochelle, and a holiday by the sea, brought to a standstill by streams of westbound traffic that had simply ground to a halt.

Immediate change of plans. I took the first exit and got myself on to minor roads leading due south, occasionally passing over or under streams of stationary traffic heading for the Atlantic coast. I followed an itinerary of country roads, which in those days were labelled flèches vertes, or ‘green arrow’ routes.

It was a marvellous, if unexpected, introduction to rural France. We stopped in tiny campsites or roadside inns, and meandered south through a parched August landscape until we arrived in the south-west town of Cahors – one-time medieval trading capital of Europe, bounded by a loop of the magnificent River Lot.

As a violent summer storm rolled in, we found a plot on a tiny campsite by the railway line and hunkered down to ride out the thunder, lighting, torrential rain, not to mention the trains that seemed to rumble past our campervan all through the night.

The morning brought clear blue skies and sunshine, and we wandered into the centre of this ancient Roman town to La Halle, a wonderful indoor market in the centre of the cathedral square. Little did I know that nearly 30 years later this town would become home to my character, Enzo Macleod, whose first-floor apartment would overlook the square and La Halle.

Having loaded up with provisions, we hit the road again, heading north and east this time, to the tiny market town of Saint-Céré – a place I had picked at random from the Michelin Guide. Fate, once more, was dealing an extraordinary hand. For here was the place that would become my future home and the centre of my universe.

We found a campsite by the river and loved it so much we came back the following year – and the year after, and the year after that. We made friends with locals and annual holidaymakers, and spent every summer there for the next eight years.

I was, at that time, script editor of the top-rated Scottish soap opera Take the High Road and in 1987 I took a sabbatical break to write a book. I drove down to Saint-Céré on my own, rented a gîte near the 13th-century village of Carennac, and found a spot in the corner of the Café des Voyageurs in Saint-Céré’s Place de la République to write my book. But it wasn’t set in France. It was set in Cambodia during the time of the Khmer Rouge, and I think now how strange it was to be writing about that time and place in a café in la France profonde. But the hand of fate was leading me once more towards a crossroads in my life.

11 celebrities who own a property in France

How did you find your house in France?

I made friends with some local people who took me to see a tiny 15th-century stone-built house on the edge of Carennac, a stone’s throw from the River Dordogne, where in a few years they would film the TV series La Rivière Esperance as well as the Yorkshire TV movie Cloud Waltzer. The house had been the subject of a viager, which is a well-established equity release scheme in France. In this case, a well-off local had offered to pay the living costs of the village bell ringer for the remainder of his days in return for inheriting his house. The bell ringer had died, and this was his house now up for sale. The asking price… £15,000.

I immediately fell in love with it, rushed back to Scotland and sold a studio flat I owned in Edinburgh. Et voilà, the house was mine. I took out a loan for £10,000 with the local Banque Populaire and set about completely remodelling the interior. I found myself spending more and more time there until, finally, I decided I needed something bigger.

A Scottish girl, Louise McConchie, ran an estate agency in the area, and she sold the Carennac house for me, as well as finding the property that was to become my home for the next nearly 20 years – a stunning converted farmhouse in the commune of St-Michel Loubejou, just a few minutes outside of St-Céré.

How we found our perfect French property

How did France inspire your writing?

This was to be the house where I would write the books that changed my destiny – The Lewis Trilogy. Again, I was writing about a place far, far away; in this case, the Outer Hebrides of Scotland, where I had lived for five years in the 1990s while filming a TV series there. I had already written most of my China Thrillers series in my new French house, and these books were now being successfully published in France. When I wrote The Blackhouse, the first of the trilogy, I was convinced I had written the book of my life. The only problem was that not a single British publisher was interested in it.

With my hopes dashed, and my pride dented, I sat in my old French farmhouse wondering what I should write next. Which is when I came up with the idea for my Enzo Macleod books. A cold case series, set in France, and featuring an expat Scot who was an expert in forensic science. After all, I was living in France, I was an expat Scot, and as a crime writer I knew more than a little about forensic science.

I returned to my first French love, Cahors, as the home for my would-be crime-solver. The rest of France would provide inspiration for each of the stories – Paris and its catacombs for Extraordinary People, the vineyards of Gaillac for The Critic, the mountains of Cantal for Blacklight Blue, the Breton island of Île de Groix for Freeze Frame, and the kitchen of three-star Michelin chef Michel Bras for Blowback.

The books were published in the United States to great critical acclaim, but the series was stopped in its tracks by a wholly unexpected turn of events. My French publisher, Danielle Dastugue of Le Rouergue, read the manuscript for the rejected book The Blackhouse, and loved it. She bought world rights, and after publishing it to bestselling success in France, sold the rights to countries around the world – including, finally, Great Britain. The ultimate irony is that The Blackhouse, and the two books in the trilogy to follow, have now sold more than two million copies in the UK alone.

However, the writing of those books, and the standalones that followed them, meant that I never did get around to writing the sixth and final book in the Enzo series – until now.

What a joy it was to return to Enzo, and to my beloved France, in Cast Iron, a book that took me on researches to Paris, Bordeaux, Biarritz and the high security prison at Lannemezan, which nestles in the shadow of the Pyrénées. The series has now also been published in the UK, to great success, and I am delighted that the last Enzo book should be published there just a few months after the penultimate book in the series hit the shelves in British bookshops. I call that good timing!

What pleases me most, however, is that the writing of this final tome in the Enzo saga, has coincided with my being accepted for French citizenship. And the French media which used to call me the “most French of Scotsmen”, now refers to me as the “most Scottish of Frenchmen”.

So, just like Enzo, I will be happy to see out the rest of my days in France – in my new French house. For, during 2016, I sold my long-time home at St-Michel, and bought a beautiful maison bourgeoise just 15 minutes away – and a mere five minutes from my first French home in Carennac.

My experience of becoming a French citizen

Previous Article Quiz: Where in France should I live?
Next Article The history of the croissant