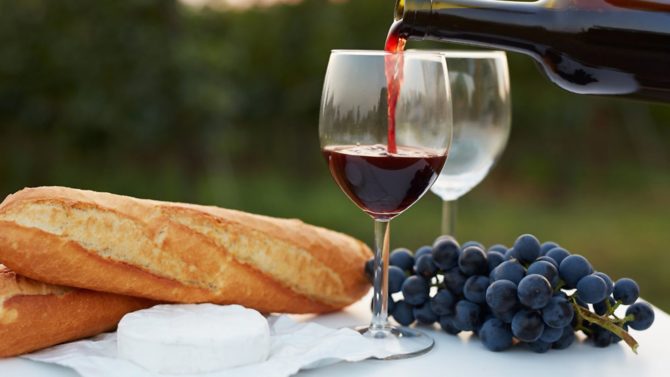 France arguably has some of the best red wines in the world, but which ones are essential to your wine rack and what’s the story behind them? Richard Hemming shares his insider knowledge of France’s most famous red wines…

Cabernet Sauvignon is the quintessential French black grape – it’s as Gallic as garlic. Why? Because it’s stylish, world-famous and can sometimes be aloof – but it always smells great.

Wine made from Cabernet Sauvignon has several distinguishing features. Firstly, it’s opaque purple in colour. The fruit aroma is reminiscent of blackcurrant, often accompanied by woody aromas such as cedar or sandalwood. On the palate, it has full body, high acid and high tannin. That means you get a grainy, drying sensation from the tannin, yet mouth-watering crispness from the acidity.

This firm structure can make it seem aloof sometimes – especially if you drink it without food. However, it also means that it can age well, and the best examples will improve in bottle for decades. Drinking a good mature French Cabernet Sauvignon with steak-frites is one of the greatest dining pleasures you can wish for.

Originally, Cabernet Sauvignon hails from the Bordeaux region, but you don’t often see it written on labels there. Instead, they prefer to emphasise the origin of the wine (known as its appellation), such as Pauillac, Médoc or Margaux. Most bordeaux is a blend of Cabernet Sauvignon and Merlot, but these three appellations usually have a majority of the former. None of them usually comes cheap – another reason why Cabernet Sauvignon is typically French!

Searching for great Pinot Noir can sometimes feel like hunting the Snark – an ultimately futile exercise. The trouble is that the variety is very tricky to grow. It has a thin skin making it prone to disease, yields are usually very low, and it requires a long cool season to ripen properly.

Thankfully, the Burgundy region of France is ideally suited to provide the right conditions – although the quality of vintages can vary dramatically. At its best, red burgundy can be truly sublime, but is usually in high demand and short supply. That results in some eye-wateringly high prices, with the top examples reaching hundreds if not thousands of pounds per bottle.

There are some outposts of Pinot Noir elsewhere in the country, however. In Sancerre, they make a little red and rosé from the variety, though it is rarely great value for money. Alsace produces some very light examples that can achieve greatness, while the Champagne region grows loads of Pinot Noir as part of the blend for its famous fizz.

Stylistically, Pinot Noir has several distinguishing features. It tends to be translucent ruby or garnet in colour, with light body, bright acidity and very soft tannin – it’s pretty much the polar opposite of something like Cabernet Sauvignon. In terms of flavour, expect red fruits such as cherry, cranberry, strawberry, often accompanied by green herby notes and sometimes a hint of truffle oil.

Red wine can be just as refreshing and thirst-quenching as white wine in hot weather – especially lighter styles. And as usual, France has the perfect solution to this vinous problem.

Gamay may not be a well-known grape variety, but it’s the sole ingredient of one of France’s most famous reds – Beaujolais-Villages. This is the quintessential light-bodied red, and as such it makes for an ideal summer quaffer. In fact, it is one of the few red wines that you can drink lightly chilled. This is because it’s made to be low in tannin and reasonably high in acidity – as with most white wines. Gamay typically has ripe black fruit flavours like blackcurrant or black cherry, often with a bit of light spice and violet aroma.

Not all Gamay is light and chillable, however. Recently, Beaujolais has become increasingly fashionable, thanks to a movement of ambitious producers who are making heavier, more complex and more age-worthy reds. These tend to be from specific villages within the Beaujolais-Villages appellation – for example, Fleurie, Morgon and Moulin-à-Vent. A little Gamay is also grown in the Loire too, but the majority of it resides in Beaujolais.

This is why you should give Beaujolais Nouveau a try

Syrah is far better known by its other name: Shiraz. Whatever is written on the label, it’s the same variety in the bottle. However, there is an implication about style: most wine labelled Shiraz tends to be full-bodied, ripe and jammy, while Syrah is a more fragrant and restrained style, often characterised by a piquant spiciness. Climate is the key to the difference. While typical Shiraz from Australia tends to come from hot regions, the heartland of Syrah in France is cooler, by viticultural standards: the northern Rhône valley. Running between Vienne and Valence, this region only produces 5% of the valley’s wine, but it specialises in Syrah. Typically, they are deep coloured with fresh bramble fruit flavours, medium body and complex flavours ranging from savoury spice to pepper to charred meat. The most sought-after appellations such as Hermitage and Côte-Rôtie rarely cost less than £25, but there are some bargains to be had. Syrah is also often used as a blending variety with Grenache and others to make Côtes-du-Rhône reds – though it is usually in the minority. You can also find Syrah used to make rosé. Also, look out for Syrah-Viognier blends, where up to 10% the white grape Viognier is blended in – a most unusual innovation, based on the recipe for Côte-Rôtie.

Grenache is the key ingredient in one of France’s most important wines – but it is not a French native. It originates from Spain, where it is known as Garnacha and is responsible for loads of mostly inexpensive, fiery vino tinto. Over the border in France it is commonplace throughout Languedoc-Roussillon and is also the primary variety of southern Rhône vin rouge.

The key characteristics of grenache are full body, low acidity, soft tannin, high alcohol and relatively pale colour. That means it is often blended with a smaller percentage of other varieties such as cinsault, syrah or mourvèdre to give the finished wine more colour and structure. This is the classic recipe for the Côtes du Rhône appellation, which is one of France’s largest and best-value red wines.

Within the southern Rhône there are dozens of smaller appellations producing wine from the same varieties but at more ambitious quality levels. Chief among these is Châteauneuf-du-Pape, famed around the world for its concentration and power. These wines tend to be hearty, full bodied and often reach in excess of 15% alcohol. As well as plentiful red bramble fruit, they are often said to have a dried herb aroma, attributed to the garrigue that grows among the vineyards of the region.

The two most recent vintages in the Rhône, 2015 and 2016, have been among the most acclaimed ever – so there has never been a better time to try for yourself.

Despite its famous name – thought to derive from merle, meaning blackbird – merlot is surprisingly difficult to find as a single variety wine from France.

It originates from the Bordeaux region, but is also grown along the Mediterranean south. In fact, merlot is the most widely planted grape variety in France, with 115,000 hectares in total – that’s more than ten times the size of Paris!Most of the time, merlot is used as a blending grape. This is especially useful in Bordeaux, where it is the perfect partner to the other main variety, cabernet sauvignon. Whereas cabernet is dark and tannic and high in acidity, merlot tends to be soft and smooth with moderate acidity and ripe plum fruit flavour.

However, those same qualities mean that it can seem a bit incomplete when made as a single variety. There are some honourable exceptions, of course – indeed, one of France’s most legendary wines, Pétrus, is made from 100% merlot in Pomerol. Unfortunately, the average price is £2,000 per bottle!

Guide to white wines from France