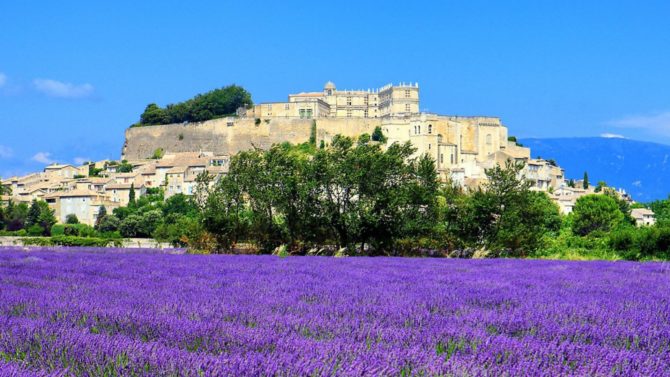 The perched village of Grignan, on the edge of Provence, is the 159th community to be officially listed as one of the most beautiful villages in France. Here’s why the community of 1,500 inhabitants should be on your househunting location list.

It is a picture postcard place

As you would expect from the Plus Beaux Villages de France label, Grignan is a highly photogenic place, set as it is on a rocky promontory above a landscape of lavender grapevines, truffle fields and scrubland. It has been occupied since prehistoric times but the dominant architecture is pale medieval stone with a majestic Renaissance château at the very top of the village. As well as the château, visitors can feast their eyes on the St-Sauveur collegiate church, the Lavoir du Mail washhouse, the beautiful winding streets and the panoramic views over the countryside.

Grignan doesn’t just look good but smells good too! It’s classified as a ‘village botanique’ thanks to its magnificent collection of roses. From the tourist office, you can pick up a map showing the spots where some 400 roses of more than 150 varieties are planted.

It is at the gateway to Provence

Grignan is in the department of Drôme, which is officially in the Auvergne-Rhône-Alpes region. But with its lavender fields directly below the village and the world-famous olive-growing industry of nearby Nyons, it certainly feels like Provence, not to mention the nearby Baronnies Provençales regional park and the little piece of landlocked Vaucluse just down the road (see Enclaves des Papes below).

It has a majestic Renaissance château

The cherry on the cake of Grignan is a fabulous fortress that is owned by the state and is a major tourist attraction in Drôme. On the site of a Roman hill fort and an 11th-century castle, it was remodelled in the 16th and 17th centuries by the powerful Adhémar family into south-east France’s biggest Renaissance château. The building was reduced to ruins during the French Revolution but restored to its former grandeur in the early 20th century at the vast expense of a rich local widow.

21 villages in Provence you should stroll through

Beautiful villages in France to explore

It has links with a famous lady of letters

In the 17th century, Parisian aristocrat Madame de Sevigné was a prolific letter writer whose correspondence, particularly with her daughter, was so witty and vivid that it was copied and circulated even in her lifetime. She began staying at the Château de Grignan for long periods after her daughter married the Count of Grignan.

After Madame de Sevigné’s death in Grignan in 1696, her letters were published and she became an icon of 17th century French literature. Today there is a statue of her in the centre of the village and an annual letter-writing festival. To mark the tricentenary of her death in 1996, a beautiful labyrinth garden was created in her memory. If you look down on it from the château you’ll see it spells the name Sevigné.

It is on the edge of a regional park

Grignan is a few minutes’ drive from the Baronnies Provençales regional park, a pristine area of mini mountains, forest and gorges, criss-crossed by trails and famous for its wild rosemary, thyme and lavender, something reflected in the cuisine.

On the southern edge of the park, visible from Grignan, is Mont Ventoux, an iconic lone mountain that often features in the Tour de France and is nicknamed ‘the giant of Provence’ or ‘the bald mountain’ because of its barren white limestone summit that looks snow-capped even in summer.

It is a lively community

Grignan counts a tourist office and library with exhibition space, doctors, dentists and a primary school among its many services while its sports facilities include a municipal pool, football ground, tennis courts and ‘boulodrome’.

More than 100 businesses operate from the commune, including a supermarket, bakery, butcher’s, chemist’s and several restaurants, one of which, the hotel-restaurant Le Clair de la Plume, has a Michelin star.

The Popes loved the local wine

A complicated quirk of history means that Drôme contains a landlocked part of neighbouring Vaucluse: the canton of Valréas, otherwise known as the Enclave des Papes. It’s a little cluster of vineyard villages just down the road from Grignan that were once highly prized by successive Popes when the papacy was based in Avignon in the 14th century. And if the Popes liked the local wine, you’re sure to like it too!

Grignan is too small for accurate data on property prices, but at the time of writing, the average house in neighbouring Valréas (see Enclaves des Papes above) costs €190,000.

Previous Article Savoie – in and out of season
Next Article Win! Elizabeth’s French Wars: 1562-1598, by William A.Heap