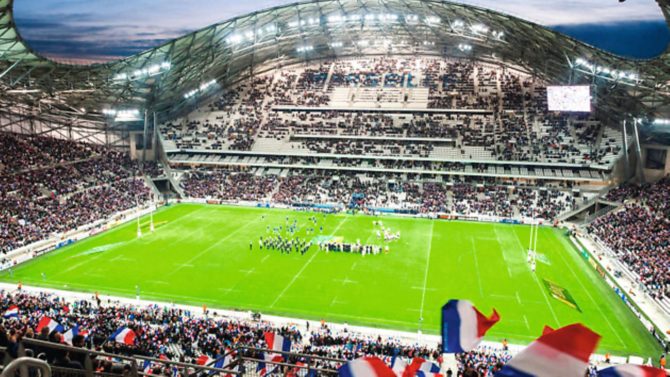 Nine French cities are hosting the UEFA Euro 2016 football championships in the summer. Discover the football stadiums which will host the matches and where to find the fan zones and giant TV screens in the cities if you don’t have a match ticket

From 10 June to 10 July 2016, nine French cities will host the UEFA Euro 2016 championships. With 51 games, Euro 2016 is the biggest sporting event in France since the World Cup finals in 1998 and will be seen as an important test in the nation’s bid to host the 2024 Olympic and Paralympic Games. Paris, Marseille, Lyon, Saint-Étienne, Bordeaux, Toulouse, Nice, Lille and Lens are the cities chosen to host the football matches.

The French capital will be staging 12 of the 51 Euro 2016 matches. Seven of the matches, including the final on 10 July, will be held at the Stade de France in the suburb of Saint-Denis in Paris, while five games will be held at the Parc des Princes. The Stade de France was built specially to host the 1998 World Cup final in 1998, which France won, and has a capacity of 80,000. To get to the Stade de France, take the RER B (blue) line to the Stade de France Saint-Denis or the D (green) line to La Plaine Stade de France. The Parc des Princes stadium, home of the football team Paris Saint-Germain, has been substantially refurbished and seats 45,000. To reach the Parc des Princes, take the metro line 9 to Porte de Saint-Cloud or Exelmans. If you don’t have a ticket to the games then join other fans in the Paris fan zone, located below the Eiffel Tower on the Champ de Mars. All the games will be shown for free on a giant screen and there will also be concert stages, food areas and a sponsored village. DJ David Guetta will be starting the festivities on 9 June with a free concert. Fans are being encouraged to explore Paris on a newly devised Paris Foot Tour linking the Champ de Mars, the banks of the River Seine, the Parc des Princes on the edge of the Bois de Boulogne and the Stade de France. The route will be lined with sporting, cultural and artistic activities.

On France’s Mediterranean coast, Marseille will be hosting six matches of the Euro 2016 championship, including a semi-final, at the Stade Vélodrome in the south of the city. The 67,000-seater stadium had a makeover in 2014 and now has a roof. If you don’t have a ticket head to the fan zone along the Prado beachfront, three kilometres from the Stade Vélodrome, or the smaller fan zone near the MuCEM in the harbour area. If you have time to explore the city then don’t miss the Basilique Notre-Dame de la Garde in the Vieux-Port with commanding views over Marseille and the MuCEM, a futuristic-looking museum housing exhibitions on Mediterranean and European cultures.

Gateway to the French Alps and gastronomic capital, the city of Lyon will be hosting six matches, including a semi-final. The Stade des Lumières in Lyon’s eastern suburbs has been built specially for Euro 2016 at a cost of €400 million and with a capacity of 59,000. Tramway 3 will run to the stadium and it is due to open a few months before the tournament starts. A fan zone will be created in Place Bellecour and will be able to accommodate 20,000 fans. Sights to see in Lyon include the Renaissance district, the trompe l’oeil murals painted on buildings and the Musée des Confluences. With a reputation for gastronomic excellence, Lyon is place to sample French cuisine. Find out more about Lyon with our city guide.

Capital city of the Loire department, not far from Lyon, Saint-Étienne will be hosting four of the Euro 2016 matches. The Stade Geoffrey-Guichard seats 42,000 spectators and is nicknamed Le Chaudron (the cauldron) because of its intimidating atmosphere. Located two kilometres from the city centre, the stadium can be reached by tram and bus. The fan zone will occupy the esplanade outside the Gare de Châteaucreux, and as well as a big screen to watch the football matches there will be football documentaries, competitions and inflatable games. Saint-Étienne was at the heart of France’s industrial revolution and the Parc-Musée de la Mine museum allows visitors to explore the underground mine shafts that were at the heart of this.

Wine capital of France, Bordeaux in the south-west will be hosting five Euro 2016 matches and a new stadium has been built. Called the Nouveau Stade de Bordeaux, the stadium was designed by Herzog & de Meuron, the Swiss architects behind the Bird’s Nest Stadium in Beijing. The stadium has sloping tiers and seats 42,000 spectators. To get to the stadium, catch the Line C tram. In Place des Quinconces, the largest square in France after Place de la Concorde in Paris, there will be a 50,000-capacity fan zone will a big screen showing all of the Euro 2016 matches. The city is a UNESCO World Heritage and a walk around Bordeaux will reveal 500 years of architecture. Read our pick of the top 10 attractions in Bordeaux.

The Stadium Municipal in Toulouse was built for the 1938 World Cup but it has been recently renovated to enable it to host four Euro 2016 matches. Located on the Île de Grand Ramier, the stadium seats 33,000 and can be reached by the yellow metro line to Saint Michel or Empalot or by free shuttle buses from the railway station. In the pedestrianised Allées Jules-Guesde, a he screen is been put up and the fan zone will include tournament and a human football table. Former Manchester United and Toulouse player Fabien Barthez is city ambassador for Toulouse and will be making an appearance in the fan zone. Elegant Toulouse is set on the Garonne river and the Canal du Midi and a river or canal cruise is a great way to see the pink city. Toulouse is also known for its aviation and you can discover this industry at the Musée Aeroscopia.

Nice also has a new stadium for the Euro 2016 championships, the Allianz Riviera stadium located five kilometres north of the Nice Côte d’Azur airport. Hosting four matches, the stadium seats 35,000 and can be reached via shuttle buses from the centre of Nice. There will be two fan zones in Nice. The first will be in the Théâtre de Verdure, where Nice Jazz Festival is held each summer, with two big screens showing the games. The second fan zone is a huge beachside pavilion beside the iconic Promenade des Anglais, complete with a sand pitch on the beach, TV screen on the beach and in the bars. Capital of the Provence-Alpes-Côte d’Azur region, Nice is the perfect place for a summer holiday with sandy beaches, festivals and restaurants terraces to relax on.

In northern France and with a direct Eurostar rail link, Lille will be popular with those heading to France for a long weekend to watch the football. The 50,000-seater Stade Pierre-Mauory is a 45-minute walk/short Line 1 métro ride from the centre of Lille and will be hosting six games, including a quarter-final. In the central Place François Mitterrand there will be a 30,000-capacity fan zone. Lille is another French city known for its restaurant scene and industrial past. There are plenty of museums, including the Palais des Beaux-Arts, shopping and dining options and a vibrant night-life.

It might seem an unusual choice of city to host Euro 2016 matches but in fact The Stade Bollaert-Delelis in Lens has hosted every major French rugby and football tournament since its inception in 1933. The renovated stadium will host four matches (including England v Wales) is a 10-minute walk from the city centre and can hold 35,000 spectators. The fan zone will be located on Place Jean Jaurès in the centre of Lens with a giant screen and animations. Lens, near Lille in Pas-de-Calais, has a history of coal mining and the pyramid-shaped slag heaps are now a UNESCO World Heritage site. The Musée du Louvre-Lens exhibits works on loan from Paris’s Louvre.