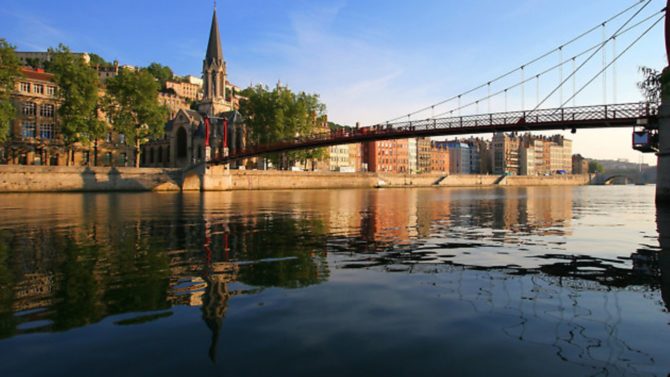 With a repuation as a food capital and gateway to the French Alps, Lyon is a vibrant and beautiful city that is definitely worth a visit. Here’s our guide to the main attractions and festivals, best restaurants and hotels and the areas to buy property in Lyon

Known for its industrial past and gastronomic scene, Lyon is a beautiful French city with a thriving cultural scene and plenty of attractions to keep you busy. Property in Lyon is much cheaper than Paris and Lyon was recently named the most attractive French city in which to live. Set at the confluence of the Saône and Rhône rivers, Lyon is the capital of the Rhône department in the Auvergne-Rhône-Alpes region. Just two hours from the ski resorts of the Alps and easily reachable from the UK, it is well worth a visit.

Vieux-Lyon is one of the world’s largest Renaissance neighbourhoods and a UNESCO World Heritage Site with distinctive architecture and a maze of streets. Across the Rhône river is the elegant Presqu’île area, full of museums, galleries, shops and restaurants while the docklands area is undergoing a regeneration project to create an area of museums, galleries, promenades, shopping centres and cafes.

What to see and do in Lyon

To get your bearings in Lyon head to the top of Fourvière Hill – either on foot or by riding the funicular railway – for some spectacular views of the city below. While you’re at the top of the hill explore the Basilique de Notre-Dame de Fourvière with its beautiful mosaics. Head for the Renaissance district of Lyon (Vieux-Lyon) and lose yourself in the traboules – a maze of covered passageways and courtyards, once used by silk weavers and merchants to transport their goods without getting wet.

As you explore Lyon you will notice the trompe l’œil murals painted on walls in the city. There are more than 100 murals, some are wild flights of fantasy while others are depictions of everyday life that look incredibly realistic. You can do a mural tour of Lyon, either an organised tour or simply collecting a map from the tourist office and exploring on your own. Two of the best murals that you should look out for are La Fresque des Lyonnais on the Rue de la Martinière, a trompe l’oeil mural depicting Lyon’s most famous residents, and Les Mur de Canuts on Boulevard des Canuts which was the first mural to be painted in Lyon and tells the story of the Croix-Rousse district.

One of Lyon’s newest additions is the Musée des Confluences, a futuristic building of steel, concrete and glass that houses millions of objects telling the story of mankind. The museum is part of the regeneration of the docklands area and sits on the confluence of the Rhône and Saône rivers. If museums are your thing, then try the Musée des Beaux Arts which houses a fine collection of paintings from artists Rembrandt, Manet, Monet, Dégas, Cézanne, Rodin and Picasso, to name just a few. Known as the mini Louvre, it boasts beautiful art without the crowds and has a peaceful courtyard garden.

Lyon was the home of the Lumière brothers the founders of cinema in the 1890s. They are remembered every year during the Festival Lumière in October and you can visit their factory which is now the Institut Lumière, a museum, cinema and library.

If you want to get out of the hustle and bustle of the city, head to the Parc de la Tete d’Or. A park of nearly 300 acres which houses a zoo, botanical gardens, rose garden and a large lake, and is a favourite with joggers, families and cyclists.

Festivals and events in Lyon

Lyon is a bustling city with plenty of festivals and events taking place throughout the year. Some of the best ones to look out for are:

In the summer of 2016 Lyon is also hosting six of the UEFA Euro 2016 football matches and a fan zone in Place Bellecour will have a giant tv screen to watch the matches.

Lyon is regularly referred to as the gastronomic capital of France (or the world, depending who is talking!) and this is hard to argue with. There are more than 4,000 restaurants in the city, 14 of which boast Michelin stars, so there is something for everyone.

To sample traditional lyonnaise food try a bouchon. These restaurants are unique to Lyon and serve traditional French cooking. One of our favourites is Le Bouchon des Filles in Rue Sergent Blandan – try the black pudding in crispy filo pastry.

Other places to stop for a bite to eat include the lively, art deco Brasserie Georges, one of the largest brasseries in Europe and Lyon’s most famous teashop and patisserie Pignol on Place Bellecour. Buy some local produce to cook at home in Les Halles, a gourmet indoor food market, or splash out on a meal at Paul Bocuse’s three-Michelin-starred restaurant L’Auberge du Pont de Collonges, just outside the city, or one of his four brasseries in Lyon – Le Nord, Le Sud, L’Est and L’Ouest. Read our selection of the best restaurants in Lyon

Luxury: High up on Lyon’s Fourvière hillside, Villa Florentine, a five-star former convent has amazing panoramas over the city. The 28 rooms are full of period furniture and antiques and don’t miss the glass-domed winter garden and Michelin-starred restaurant (doubles from €290).

Unique: In Lyon’s old town, La Cour des Loges hotel is ensconced in the walls of a Renaissance palace. It boasts a Michelin-starred restaurant, cellar spa, leafy hanging gardens and a wine cellar (doubles from €190). For something a bit different try Le Collège, a fun, school-themed hotel in the old town with a refectory-style breakfast room complete with old books and blackboards (doubles from €130).

Budget: If you’re on a budget try Mama Shelter Lyon, one of the Philippe Starck designed hotel group, and combines industrial chic with an enviable location and bargain prices (doubles from €69) or SLO hostel, designed by a local architect and artists (dormitories from €25, doubles from €75).

Prices in Lyon can vary considerably depending on the location and quality of the property. The average price for an apartment is around €2,780/m² but this can rise to more than €5,000/m² if you are buying a period apartment in the centre. However, this is still considerably less than Paris where apartments can cost an average of €8,020/m². You can expect to pay anything from €250,000 for a house in one of the more affordable suburbs of Lyon to €500,000 in the Croix Rousse area of Lyon.

Expensive areas of the city include La Confluence where the regeneration plan has seen the building of a lot of new developments, and the Triangle d’Or and Place Bellecour areas where old character apartments can cost €6,000/m².

If you are looking for good value for money try further out of the city centre, for example Vaise where a lot of first-time buyers live, and Oullins in the southern suburbs has been recently linked to the métro. You can find the latest average property prices here and search for properties in Lyon here.

The international Lyon-Saint Exupéry airport welcomes flights from London and around the UK. The main airlines that operate flights to Lyon are Flybe, easyJet, Monarch, British Airways and Jet2. Check airline websites for details. Eurostar now runs a direct service from London Saint Pancras to Lyon which takes around five hours. Lyon has a good metro system so you can easily travel around the city or you can you hire a Velo’V bike (a similar system to Paris’ Velib’).

Foodie fan? Visiting a bouchon is one of our pick of 23 food experiences in France all foodies will love

Travelling further afield? Here’s our pick of ski resorts you can reach from Lyon