Explore Paris in a day 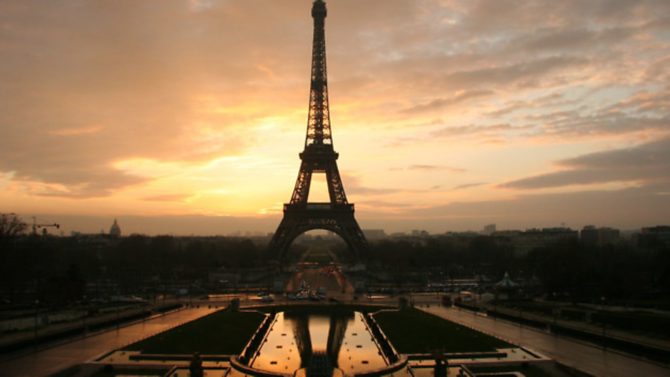 From sunrise at the Eiffel Tower to sunset at the Sacré-Coeur Basilica, our itinerary manages to squeeze in Paris’s main sights and attractions into one day – perfect for those with limited time in the French capital

If you want to see Paris in a day then you will need to make an early start, and what better way to start than watch the sun rise behind Paris’s most recognisable landmark? First, head to the Trocadéro and watch the sun cast a pinkish glow over the distinctive Palais de Chaillot. As it rises the sun backlights the Eiffel Tower, on the other side of the River Seine, turning this iconic monument into a shadow theatre.

After such an early start, a coffee break is in order. Carette is a stylish art-deco patisserie on the nearby Place du Trocadéro et du 11 Novembre. Try the selection on colourful mini-macarons – one of its signature treats. For other breakfast ideas: the best breakfasts in Paris

Just down the road at the Cimetière de Passy, pay your respects to Impressionist painter Édouard Manet who was buried here in 1883, before heading to the Musée Marmottan Monet in Avenue Paul Doumer to admire the artist’s work. The museum also displays more then 300 works by Claude Monet and paintings by Camille Pissarro and Pierre-Auguste Renoir among many others.

Next, stroll down Rue de Passy towards the River Seine and also the Avenue de New York to the Flamme de la Limberté. The full-sized gold-leafed replica of the flame held by the Statue of Liberty is a glittering symbol of Franco-American friendship put up in 1989 to commemorate the centenary of the International Herald Tribune newspaper. For millions it is also an unofficial memorial to Diana, Princess of Wales, who was fatally injured in a car accident in the tunnel beneath the statue in 1997.

For lunch, head across the Pont de l’Alma and board the Cristal II run by Bateaux Parisiens. On board, you can drift down the River Seine and watch Paris float by. Some of the sights to look out for include the four gilded winged horses on the Pont Alexandre III, the Musée du Louvre, Pont Neuf and the Notre-Dame cathedral.

Back on dry land, explore the Left Bank. First, wander around the Musée d’Orsay with paintings including Vincent van Gogh’s Starry Night Over the Rhône, Paul Cézanne’s The Card Players and Paul Gauguin’s Tahitian Women on the Beach. Ten minutes’ walk away is the Musée Rodin on Rue de Varenne where you can see his most famous sculptures The Thinker and The Kiss.

Back at the Seine, the ‘love locks’ have been removed from the Pont des Arts because the weight of them caused it to collapse. Further along, the Pont de l’Archevêché is still covered in padlocks but it won’t be long until they too are removed. There is a gorgeous view of the Notre Dame from here.

Across the road is Paris’s English-language bookshop Shakespeare and Company. The original opened in 1919 in Rue Dupuytren before moving to Rue de l’Odéon and attracted illustrious writers including Gertrude Stein, F. Scott Fitzgerald and Ernest Hemmingway. This closed in 1940 and the current shop on Rue de la Bucherie opened in 1951. Somehow it remains quaint and charming, despite publicity gained from appearances in the films Midnight in Paris and Before Sunset.

Stop a few doors down for an aperitif at Le Petit Pont a hangout of students from the Sorbonne, or try Chez Prune café, opposite Canal Saint-Martin, a favourite of Brad Pitt according to the locals. Lived-in but lively, with odd décor, it has a lot of character and a charcuterie plate to die for. The Canal Saint-Martin is one of Paris’s trendiest neighbourhoods. Wall-art is everywhere and streets are packed with boutiques and coffee shops.

By now sunset should be well on the way so climb up Montmartre to the Chez Plumeau restaurant with delicious meat dishes and, importantly, inspiring views. After dinner wander over to Sacré-Coeur and stand at the foot of the basilica as the sun sets over Paris.

Looking for more ideas for a day out in Paris?

Top things to do in Paris

8 things to do in Paris in the summer

Previous Article UEFA Euro 2016 in France
Next Article Why should I buy a property in France?