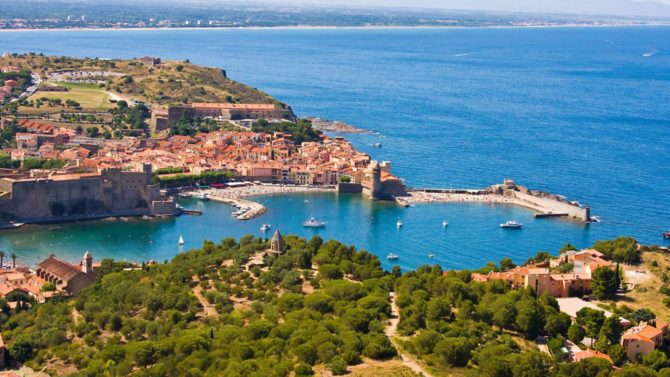 The lesser-known Languedoc-Roussillon area in France has been named in Lonely Planet’s Best in Travel for 2018. With glorious countryside dotted with vineyards and fortified towns, Mediterranean coast and delicious food, it’s surprising the southern French region has not been in the spotlight before. Here’s why you should visit Languedoc-Roussillon.

1. It’s a region steeped in history

Part of the larger Occitanie region since January 2016, when the French regions were restructured, Languedoc-Roussillon has been a strategic location since Roman times and is dotted with historical sites, from Medieval castles and fortified villages to Roman aqueducts. The langue d’oc, also known as the Occitan language, is still spoken today in some parts and lead to a prolific literature production in the Middle Ages.

The landscape, food, heritage and even people are varied and diverse thanks to the many influences the region is blessed with. The Mediterranean bathes the southern part of the region with maritime air as the coast stretches from Cap Cerbère, in Pyrénées-Orientales, to the resort of Le Grau du Roi, in Gard. The Pyrénées mountains to the west and the Cévennes to the east give the region more dramatic landscapes. Cathar heritage and Spanish food, traditions and even language cross the border and add character to the area.

A guide to the Aude department

Under-the-radar destinations to visit in France

3. The landscapes are beautiful

You’ll find deep, green mountain valleys and rivers in the Cévennes, the breathtaking Gorges du Tarn, sleepy villages straight out of a fairytale, amazing human-made sites such as the Pont du Gard, the Roman arenas in Nîmes and the historic citadel of Carcassonne, long sandy beaches, dramatic peaks in the Pyrénées Catalanes, buzzing seaside resorts and ever-growing cities for a shot of culture.

4. The food is varied and tasty

5. It has France’s largest wine-producing area

The Languedoc wine area spreads over 245,000ha – twice more than Bordeaux’ wine-producing region – and is home to 36 appellations, including Languedoc, Corbières, Faugères, Minervois and St-Chinian.

Good museums to check out include the Musée Fabre in Montpellier, the Carré d’Art contemporary art museum in Nîmes, Narbonne’s beautiful Musée archéologique, housed in the incredible archbishops’ palace. Set to open in June 2018, the Musée de la Romanité will be located opposite the Roman arena in Nîmes and showcase the town’s exceptional archaeological collection in a swanky new set up while Narbonne is also hoping to step up with a the Regional Museum of Ancient Narbonne (known as MuRéNa), scheduled to open in 2019.

How to celebrate the vendanges in France

7. You can stay busy in the region’s vibrant cities

Mingle with the many students in the hip city of Montpellier which offers a good balance of architectural heritage and fun bars, restaurants and nightlife. Béziers, located on the Orb river, has an attractive old town centre including the St Nazaire cathedral, while the feria bull-racing fête animates the city every year. Other bigger towns include Narbonne, Nîmes, Sète and Perpignan.

8. Or take a gentle stroll among some of France’s prettiest villages

Previous Article How do the French celebrate Christmas?
Next Article Where to spend New Year’s Eve in France