Where to spend New Year’s Eve in France 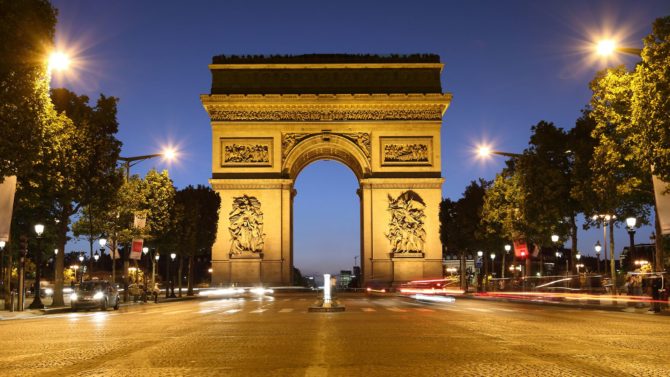 Want to do something different for New Year’s Eve this year? How about joining the crowds on the Champs-Élysées, escaping everyone at a national park, listening to a concert in a prehistoric cave or tucking in to a French Réveillon?

1. Join in with the celebrations in Paris

The French capital is the classic choice for New Year’s Eve and there is certainly no shortage of celebrations. The Champs-Élysées is closed to traffic and there is a spectacular light show on the Arc de Triomphe. Be warned though, the crowds are big! But this isn’t the only option in Paris on New Year’s Eve, you could spend the evening at a traditional marché de Noël, a number of them including the ones at Champ de Mars and Saint-Germain-des-Près, are open on New Year’s Eve. Or splash out on a special le Réveillon meal at a gourmet restaurant, a caberet show at the Lido or Moulin Rouge, or maybe a cruise along the Seine from where you can watch the celebrations at midnight.

2. Party hard at a ski resort

Kick off 2018 in style at a French ski resort where you can spend the day skiing and then party long into the night. In Courchevel and Tignes there are parties with live DJs at the foot of the slopes along with the impressive fireworks displays at midnight. While in La Plagne and Val Thorens there are impressive light displays to accompany the traditional fireworks.

30 reasons to visit France in the winter

3. Get away from it all in a national park

If you’d rather a peaceful New Year’s Eve then why not book a break in one on France’s National Parks? There are 7 national parks in France and they are all located in the south of the country, mostly in sparsely populated mountainous regions. Spend your days exploring the park and your evenings tucking into French mountain food and sipping champagne – what better way to start 2018?

4. Stay in and indulge in an extravagant meal

If you’re lucky enough to live in France or have friends or relatives to stay with then spend a traditional French New Year’s Eve. Rather than going out, the French tend to splash out on a luxurious Réveillon meal with snails, oysters, foie gras, truffles and other French delicacies. Unlike Christmas Eve when le Réveillon is eaten at midnight, on New Year’s Eve dinner is earlier so you can see in the new year with champagne and a party at home.

5. Watch the fireworks displays along the French Riviera

If New Year’s Eve just wouldn’t be right without spectacular fireworks then head south to the French Riviera. Cannes hosts one of the best fireworks displays in France with an amazing sound and light show in the bay while in Nice everyone heads to Place Massena to countdown to midnight.

6. Take a dip in the Atlantic

Feeling brave? In Normandy and Brittany hundreds of hardy souls venture into the freezing Atlantic sea. Head to Plérin or Saint Cast le Guildo for the last swim of the year on 31st December and then to Roscoff, Dieppe, Etretat or Fécamp the following day for the first swim of 2018! A hot drink will be waiting for you when you emerge from the sea.

How about seeing in the new year at a French vineyard with a glass of wine in hand? The town of Viella in Gers celebrates New Year’s Eve with Les Vendanges du Pacherenc de la St-Sylvestre. Spend the whole day in the town with a traditional lunch, evening mass to bless the harvest, torchlight procession and a late-night grape harvest in the vineyards.

8. Cruise through the city of Bordeaux

Bordeaux has been the must-visit French city of recent years with the opening of the new high-speed train route from Paris and the opening of the Cité du Vin in 2016 putting it on people’s travel radar. Spend New Year’s Eve at one of the city’s restaurants or book a cruise along the Garonne river which runs through the city.

9. Underground in a cave

For a truly memorable New Year’s Eve head to the Lombrives cave in Ariège to see in 2018. You will be given welcome cocktails and a hour-long tour of the cave followed by a delicious French dinner and a concert in the Salle de la Cathédrale.

Winter has arrived in France

This is why you should visit Paris in winter