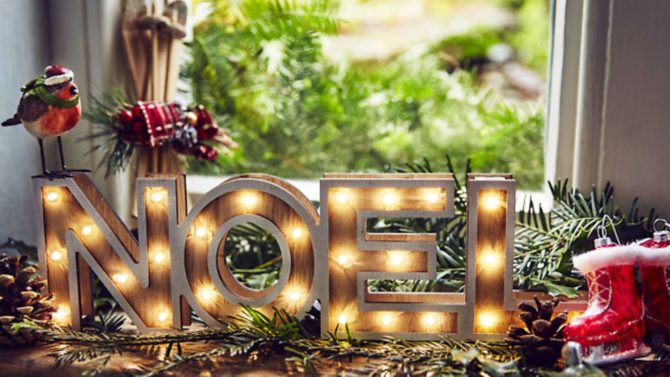 Traditional French Christmas celebrations include letters from Santa, feasts on Christmas Eve and presents at the beginning of December!

A letter from Santa

Writing to Santa is a tradition across the world but in France he writes back! A law was passed in 1962, stating that children who had written to Père Noël must receive a postcard by way of response. For over four decades, the postal centre in Libourne in Gironde has replied to countless children (some from as far away as Russia) on behalf of Père Noël, with thank you notes and enchanting seasonal greetings.

French decorations tend to be more understated than the more extravagant style that’s popular elsewhere in the world. Decorations are often bought from the marchés de Noël and a quality over quantity strategy is usually favoured. The Nativity is an important part of the French Christmas decor where, alongside the Holy Family, shepherds and three kings, you can spot more unconventional figures including a butcher, baker or police officer in the crèche that’s left on display until 2 February.

Christmas trees are also popular in France. They first appeared in Sélestat in Alsace in the 11th century, (the first town in the country to authorise the felling of a tree for Christmas) and then the sapin de Noël became a common feature in French households in the 1830s. Traditionally decorated with apples, paper flowers and ribbons, they are now more commonly adorned with baubles and fairy lights.

There is also a tradition of bringing yule logs made from cherry wood into the home on Christmas Eve. To give the tradition a truly French twist, some people sprinkle the log with red wine so that it will have an aromatic smell when it burns. In a humble gesture to honour the beginning of Christmas, it was customary to leave the log and candles burning throughout the night, with some drinks and food, should Mary and the baby arrive during the night.

Start giving presents at the beginning of December!

For children in France, there’s the added bonus of enjoying the gift-giving season for that little bit longer, with Christmas celebrations starting on 6 December for St Nicholas’ Day. On the eve of these festivities, children place their shoes near to the fireplace as they sing traditional songs or hear stories about the saint from grandparents, before waking in the morning to find their shoes filled with treats – if they’ve been good – while other children who have featured on St Nicholas’ naughty list will find a bundle of twigs tied together with ribbon.

The French traditionally have their main meal – Le Réveillon –after midnight Mass on Christmas Eve. The impressive banquet includes seasonal favourites such as oysters with mignonette sauce, snails, foie gras, candied chestnuts and capon, a cockerel or rooster bird. If you can manage it, dessert is usually bûche de Noël, a chocolate sponge cake shaped to resemble a yule log. First created in France in the 1800s by a pâtissier from Lyon, Monaco or Paris (depending on who’s telling the tale), the traditional dessert pays homage to the French tradition of burning a yule log during the festive period. While a small glass of sweet liqueur is the perfect accompaniment to the chocolate pudding, a merry flow of champagne is preferred with the main course.

The 13 traditional desserts eaten at Christmas in Provence

Continue the celebrations into January!

The French festive dining experience is most definitely a marathon, not a sprint, as festive feasts continue into the New Year (a similar banquet to Christmas Eve is held on the last night of the year). Perhaps the most charming of the culinary customs happens on 6 January when families go to the boulangerie to buy the traditional treat of galette des rois to mark the feast of Epiphany. A puff pastry cake, the dessert dates back to the 14th century and hides a figurine in its layers of pastry, butter and ground almonds. Traditionally, the family gather round to cut the cake with the youngest child hiding under the table, instructing who should get each piece, so as no one can cheat. Whoever bites into a slice with the enclosed trinket is crowned king or queen for the day, bringing the custom of eating like royalty for almost two weeks to a very sweet end.

This is why you should visit Paris at Christmas