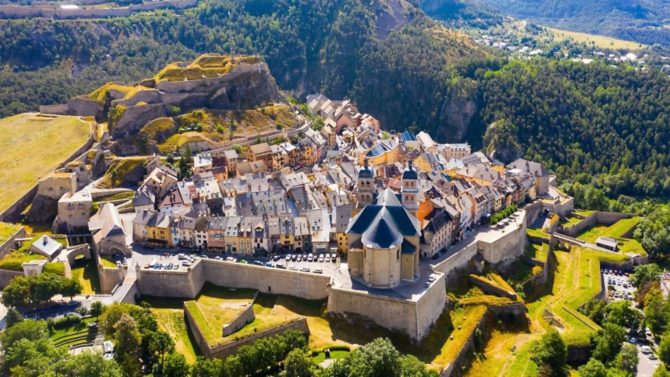 From picturesque Alpine towns to dramatic Pyrenean peaks, be inspired by these gorgeous photos of French mountains

1) Walking the dramatic Vercors Massif, which straddles the departments of Isère and Drôme in south-east France and is a popular destination for outdoor sports enthusiasts.

2) The gorgeous waters of the Lac de Gaube in the French Pyrenees. You can see the Pic du Vignemale, the 3,298m-high mountain split between France and Spain, in the background.

3) The pistes await in the Savoyard resort of Les Menuires, one of the venues of the 1992 Winter Olympic Games.

4) An Abondance cow grazes in a lush Alpine meadow in La Plagne.

5) The unusual shape of fortified Briançon in Hautes-Alpes is best seen from above.

6) The three peaks of the Aiguilles d’Arves stand proudly above the Savoie countryside.

7) As the highest mountain accessible by cable car in the area, the Aiguille du Midi in the Chamonix valley is a must-visit for any visitor to Haute-Savoie.

8) A magnificent view of the ruins of the Château de Lœwenstein in the Vosges mountains in Bas-Rhin.

9) Victor Hugo described the Cirque de Gavarnie in Hautes-Pyrenees as “the Colosseum of nature” and it’s not hard to see why.

10) Who lives in a house like this? An idyllic mountain dwelling near the village of Pralognan-la-Vanoise in the Alps.

11) A snowy scene in the ski resort of La Grave in the Écrins National Park, south of Grenoble.

12) A handsome donkey poses for a picture in front of the Pic du Midi d’Ossau in the French Pyrenees.

13) Ticket to ride! Take a trip up to the Mer de Glace glacier on the famous little red train which departs from Chamonix.

14) The ruins of the convent of San Francescu di Caccia near Castifao, Corsica, look spellbinding against the snowy mountain backdrop.

15) The Tour de France peloton navigates the hills of the Massif Central – seen here at the Pas de Peyrol in Auvergne.

16) The Tour du Mont Blanc hiking route in the French Alps is an epic challenge for any walker.

Previous Article How to work remotely from a house in France…and 10 other things we learnt in the January issue of French Property News (plus Living France)!
Next Article Recipe: Festive Cider