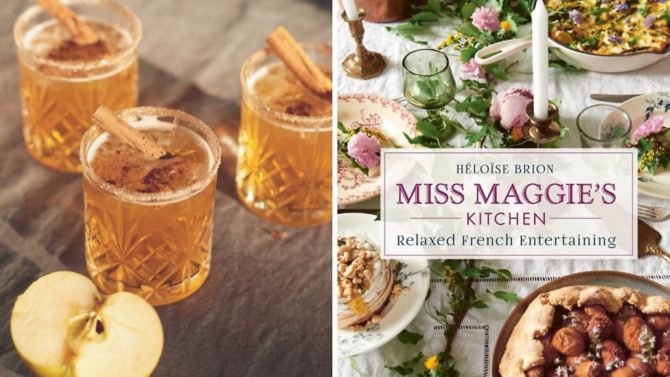 A new cookbook from France’s home-cooking guru, Heloïse Brion, includes laid-back recipes for every occasion, including her beautiful table settings that are festive and welcoming.

Heloïse’s early life was rhythmed by mealtimes, from her childhood in Florida, where her mother proudly upheld the tradition of the French family dinner, to summers spent in the French Pyrénées where her grandmother cooked over a wood-fire oven. What initially began as a whimsical pastime turned into Miss Maggie’s Kitchen, Heloïse’s brand that blends cooking, travel and lifestyle. Her innate talent for style and entertaining stems from her informal American approach to life mixed with her inherent French flair.

In a small, shallow bowl, combine the sugar with six pinches of cinnamon.

Wet the rim of each of the eight glasses and dip into the cinnamon sugar.

Carefully fill the glasses halfway with cider and top off with champagne or prosecco.

Add a few large ice cubes to each drink and sprinkle with the remaining cinnamon.

Garnish with the cinnamon sticks and serve immediately.

There is a chance to win a copy of the cookbook, worth £20, as well as a host of other titles in our Advent Calendar Competition. Entries open on 21 December 2020.

12 of the best UK-based French supermarkets, delicatessens and bakeries to buy your favourite French foods from

Previous Article 16 dreamy pictures of France’s mountains that will have you longing for the hills
Next Article Win a copy of Art is a Tyrant: The Unconventional Life of Rosa Bonheur, by Catherine Hewitt