Why should I buy a property in Najac in Aveyron? 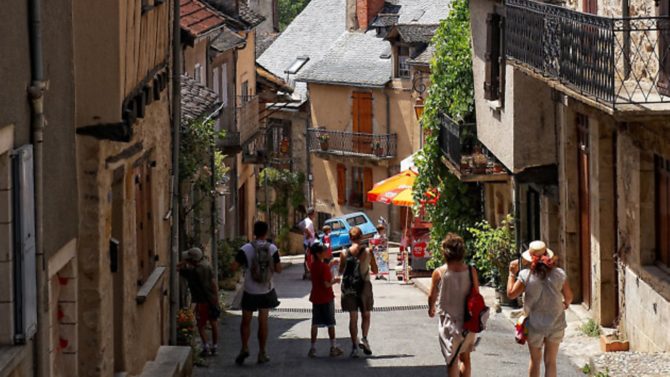 Picturesque and popular with househunters, the town of Najac in Midi-Pyrénées could be your new home in France. A local property agent reveals why expats buy houses here and why he loves the town

Tell us about Najac

The medieval village of Najac, in Midi-Pyrénées, is officially listed as one of the Plus Beaux Villages de France. It is set along a ridge above a bend in the Aveyron river, and is very close to the point where the departments of Aveyron, Tarn and Tarn-et-Garonne meet. This area is renowned for its rivers and lakes, its rugged landscapes and its wide open agricultural spaces where you can walk, cycle, fish or simply enjoy nature at its very best. It’s also a paradise for children of all ages, and it’s safe too, reminding me and many others of the south of England in the ’50s and early ’60s. An age of innocence, I suppose. During the last 20 years, I’ve worked and travelled all over France and nowhere comes close to the feeling of peace and contentment I get here. It’s also the feeling of stability and security reflected in the magnificent stone and lauze architecture seen in even the most simple of rustic buildings. Our agency is based in Najac and I couldn’t imagine a life anywhere else.

What’s the appeal of Najac to househunters?

This area has so much to offer all types of people. It’s an ideal retirement area, with property prices being much lower than in the UK, long warm summers and a good social life available. Health facilities are exceptional and there is always a doctor not too far away who speaks English. For families it is absolutely ideal, and there’s a wealth of activities for all ages to enjoy. For example, there are great day trips for the kids to Micropolis (La Cité des Insectes), as well as Lac de Pareloup and the Millau viaduct. The beaches of the Mediterranean are only three hours away too. For those who are keen skiers, we are also only two hours from the ski slopes above Laguiole and three hours from the Pyrénées. Both areas offer great skiing, and at considerably less expense than the Alps. You really do get the best of all worlds here. If you are wanting to move over and work, learning the language is imperative. Once a job is found or created, the children will benefit from a very high standard of education and will pick up the language in no time. Many Brits run B&Bs or other tourism businesses such as cycling holidays, rock climbing, art courses and even vineyard tours.

Life here lends itself both to people looking for a second home and those wishing to settle down and make a life for themselves among their French neighbours. There is a wide variety of holiday homes on offer, many with pools and most in rural locations. Annual maintenance and supervision, as well as rental changeovers, can be professionally handled by a number of companies, often run by expats. We often find that the owners of second homes lead fairly stressful lives and just want to take a few weeks to find themselves again. There are expats living here from many countries and this can lead to a full and varied social life. Conversation often revolves around food and wine, as we are in one of France’s richest areas for excellent examples of both. It is always a good idea to include locals as their humour and knowledge of the area, its produce and its history, are invaluable. I never imagined that one evening I would be sitting down with French neighbours, enjoying a meal including the most delicious stinging nettle tart accompanied by a glass of Gaillac Perlé.

What other towns are nearby?

The magnificent cathedral city of Albi, a truly stunning gem, is just an hour away from Najac. Meanwhile, Toulouse, France’s fourth largest city and the centre of the European aerospace industry, is a fabulous place to visit with its beautiful pink-brick architecture, great shops, excellent restaurants and museums. Our closest town, Villefranche-de-Rouergue, is an old bastide town and hosts one of the best markets in France.

Where are the most popular areas in Aveyron and Tarn with househunters?

The most sought-after locations for British buyers are the villages of Najac, Cordes-sur-Ciel, St-Cirq-Lapopie and St-Antonin-Noble-Val. Belcastel and Sauveterre-de-Rouergue are also stunning in their own way and worthy of an extended visit. Also not to be missed are the riverside village of Varen, swimming off the pontoon at Laguépie, abseiling at Bor-et-Bar and finding those oh-so-quiet and hidden bathing spots on the Viaur river. If you want to book well in advance, the three-Michelin star restaurant of Michel Bras, up at Laguiole, is second to none. Two beautiful parts not widely known are the Viaur valley between Bor-et-Bar and Jouqueviel, and the area known as the hundred valleys, between La Salvetat-Peyralès and Sauveterre-de-Rouergue. Both offer wonderful scenery with river gorges and forests, and of course some spectacular views.

What is the local property style?

Around the Najac area and to the east and north, the properties tend to be built from local granite with lauze (a form of stone) or slate roofs. Many feature tall pigeonniers, either attached to the property or set apart. Pigeon was a regular feature of the Aveyronnais diet and can still be enjoyed in many restaurants. Corps de ferme is another very popular style and usually consists of a stone farmhouse and barn, along with other stone buildings around a central courtyard. Further south and to the west, the properties are more in the Midi-Pyrénées vernacular with gentle sloping pantiled roofs and often rendered pastel finishes.

How do I get there?

You can either fly with Ryanair from Stansted to Rodez; to Toulouse with easyJet; or British Airways from Heathrow. For those wishing to drive it is 8-10 hours from the ferry ports without stops.

Previous Article 23 French words you will hear on the radio in France
Next Article Could you commute from Charente to London?