Could you commute from Charente to London? 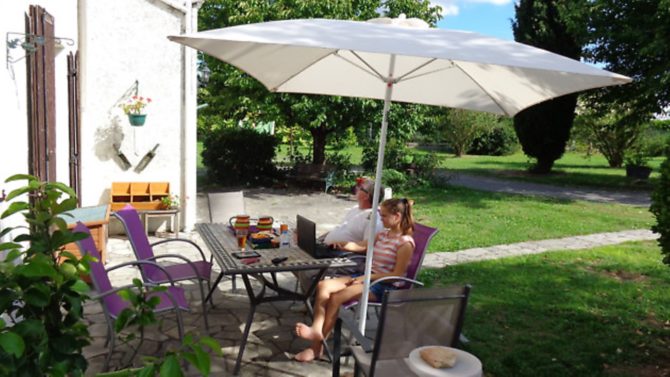 Expats Darren and Franca Porter run a B&B in Charente but Darren also commutes from Charente to London every week. Find out how he does it and why he thinks life in France is worth the travelling

What line of work were you in before you moved to France?

Before we moved to France in 2007, we lived in London where my husband Darren worked for himself as an IT Project Manager and I was a full-time mum to my daughter. Previously we had lived in the Netherlands where Darren was also an IT Manager (and yes he speaks Dutch too!). I have done several jobs, but the longest one was for Texaco Oil Company in Rotterdam and Brussels where I worked as a marketing assistant.

What inspired you to set up and run a chambres d’hôtes?

Before I met Darren, my dream was to marry an Englishman and own a hotel. Also, we both decided that we didn’t want to work for a ‘boss’ again. My wishes have come true. Our chambres d’hôtes is located in the heart of vineyard country renowned for making world-famous wine. The hotel is open all year round and our guests can enjoy the local weekend summer flea markets and the many cycle routes. We managed to find a property in a relaxed area that makes for the perfect holiday.

What attracted you to Charente?

We had looked for properties in Devon and Cornwall first but at that time properties were either too expensive or affordable but in an area that didn’t suit us. Darren suggested that we had a look in France, in Charente, because he knew Saintes and its surroundings from former holidays with his friends. We spent a month in Poitou-Charentes to see if we liked the area and then we looked for a house. I would recommend that others look closely at the area before searching for properties and not vice versa. It took us two long years to find the right house, but that is a distant memory now after seven happy years.

How did you find the property?

Our search started on the internet and once we found properties of interest, we contacted the estate agents. Making appointments wasn’t easy as it involved flying or driving from the UK. Within our two-year search, we had visited about 30 properties. For a property to be considered, it had to have good local schools, not be too rural and be either an existing B&B or a big enough house to be transformed into one. One thing was for certain, we did not want a ruin.

How did you start the business?

We knew what we wanted to call the business before we found the property. Au Bellefleur is named after our daughter Fleur and Bellefleur is an ancient type of a Dutch apple. Once the major building work was done, the reception rooms were transformed to become breakfast and sitting areas for guests. Just before we opened, we had friends to stay so we could practise cooking evening meals (table d’hôte) before we opened to the paying guests.

What have been the main challenges?

Since starting the business seven years ago, the challenges have changed. Every year we have learnt from our mistakes. It is important to both of us that we are happy in our work and if we aren’t happy with something we change it. If you are not happy, it is hard to make guests happy. If you know the area well you can then easily recommend activities and places of interest to guests – until you have this knowledge it can be a challenge.

How do you juggle family life and work?

The reality for us is that we could not live on the money we make from the chambres d’hôtes. We luckily have another income. We are keen that our business is a quality one that has longevity, rather than one that makes a quick profit. We don’t have much time as a family because Darren still commutes between the UK and France. His job permits him to fly to Bordeaux every Friday and to travel back to the UK on Monday at the crack of dawn. Our daughter Fleur (13) also has long days at school. She catches the bus at 7.30am and on some days finishes as late as 5pm.

How do you manage the commute from Charente to London?

Living here in the Charente we have five airports to choose from: Limoges, La Rochelle, Poitiers, Bordeaux and if we are desperate Bergerac, though that is the hardest for us to get to, as there are no fast road connections. All five airports are about a 90-minute drive from home and are served by most of the major low-cost airlines.

My favourite airline and airport combination, purely due to the flight timings and year-round service, is to use British Airways from Bordeaux. This means on a Monday morning I will leave home at around 6am to drive to Bordeaux. The one downside to Bordeaux is that there is an equivalent of the M25, so I have to allow extra time for the Monday morning rush hour. I park my car in the long-stay car park for a week, which costs €36, and walk over to the airport. It’s nice to stretch your legs after the drive and it’s only 10 minutes. There is a shuttle bus too, if it’s raining.

Depending upon the time of year, my flight to London leaves Bordeaux between 10am and 11.30am, which puts me in London Gatwick airport between 11am and 12 noon local time. I am lucky because I start work most Mondays in Victoria, which just happens to be where the trains from Gatwick airport terminate. Then it’s a short walk for me to pick up my lunch and arrive at the office, for about six hours of work, before heading off to my lodgings.

The return journey on Friday usually means I can do five or six hours of work in the office before catching the train down to Gatwick to take the flight back to Bordeaux. Again, times vary depending upon the time of year, which can be anything between 3.30pm and 8pm. In the worst case scenario, I get home at midnight on a Friday night.

Bear in mind that some flights are seasonal. For two months of the year, I can fly with easyJet in and out of La Rochelle as their times suit me even better than British Airways and the drive is nicer too. With the advent of flexible working and even working from home, it means that, although I am in the UK most of the time, I can move my working week around flight times to maintain a pretty good work-life balance.

What are the best aspects of living in France (and in Charente in particular)?

The winters are long here but when the weather is good, it is fantastic. Our house is south-facing, so we have ample opportunity to sit out in the sun. The people are very friendly and helpful. The part of Charente where we live is surrounded by vineyards and sunflowers that offer breathtaking scenery. For a change of view, you are in easy reach of the beautiful sandy beach of Saint-Georges-de-Didonne.

Previous Article Why should I buy a property in Najac in Aveyron?
Next Article WIN! A copy of How to Sound Cultured