The tragic life and death of Édith Piaf: a French icon 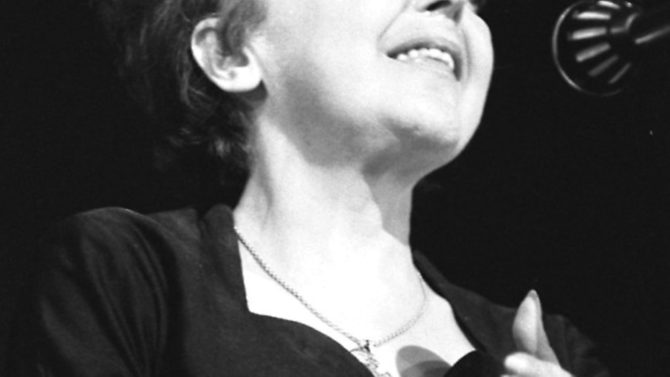 One hundred years ago, on 19 December 1915, one of France’s most famous singers was born in Belleville, a working-class district of Paris. The story goes that Édith Piaf was delivered on the steps of 72 Rue de Belleville, although her birth certificate records her birthplace as the local Hôpital Tenon, which still exists in Rue de la Chine in the 20th arrondissement.

Édith was the daughter of street performers and was christened Édith Giovanna Gassion. When she was still quite young, her mother left the family to build a career as a singer, and a teenage Édith accompanied her father as he toured France as an acrobat. Her singing act was shared with Simone ‘Mômone’ Berteaut, who is thought to have been her half-sister.

Édith’s early years were lived in poverty and hardship, which along with the tragedies that scarred her life, gave authenticity to the emotional songs for which she became famous, such as Non, Je ne Regrette Rien. As a child her home was either on the streets, in cheap hostels or with her grandmothers, one of whom ran a brothel in Normandy. At the age of 17 she gave birth after a brief love affair, but the girl died at the age of two from meningitis.

The singer’s fortunes turned in 1935 when she was 20 years old. She was busking near the Arc de Triomphe when her raw, emotional voice caught the attention of a passing nightclub owner, Louis Leplée, who offered her a contract. At just 4ft 8in tall, Édith was a tiny figure, so Leplée suggested that she change her name to La Môme Piaf, ‘the sparrow chick’. Early performances at his club, Gerny’s, in Rue Pierre-Charron off the Champs-Élysées, led to Piaf making her name with leading figures in the arts and politics. Within a year she had recorded several albums and become one of the highest-paid musical stars in France.

In 1936 Leplée was murdered by Parisian mobsters and Piaf was questioned by police as a suspect. She survived the potential damage to her reputation with help from a growing circle of admirers, including the artist and writer Jean Cocteau, who wrote the play Le Bel Indifférent for her.

During the Nazi occupation in World War II, Piaf performed in Parisian nightclubs frequented by the Germans and was invited to make a concert tour in Berlin. Accusations of collaboration were laid to rest after the war when her secretary, Andrée Bigard, a member of the Resistance, spoke up in her defence.

In the late 1940s, Piaf began writing songs, among them her signature tune La Vie en Rose, and her work became known to an international audience. However, tragedy continued to haunt her. The love of her life, the married boxing champion Marcel Cerdan, was killed in an air crash in 1949 on the way to meet her in New York, and she herself was involved in three serious car accidents that left her addicted to morphine. She also had a drink problem before and during her first marriage to the singer Jacques Pills in the mid-1950s.

Édith died of liver cancer at her villa in Provence in October 1963, aged 47. Her second husband, actor and singer Théo Sarapo, arranged for her body to be returned to Paris in secret to make it seem as if she had died in the city where she had spent almost all her life.

Piaf had led such a wild life that the Archbishop of Paris refused to allow a Mass to be said at her funeral. She was buried at Père Lachaise cemetery following a procession watched by tens of thousands of mourners. The singer Charles Aznavour said it was the only time since the war that he had seen the traffic in Paris come to a standstill.

Interested in history? Read about Gustave Eiffel; Pablo Picasso and the Battle of Waterloo

Previous Article WIN! A copy of Luke Nguyen’s France: A Gastronomic Adventure
Next Article What is life like running a B&B in France?