What is life like running a B&B in France? 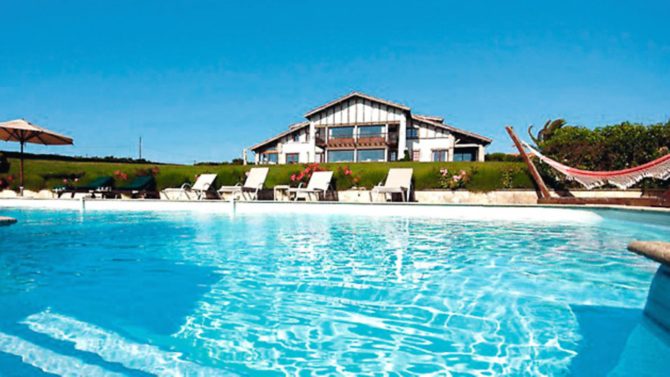 Former rugby player Jamie Rennie moved from the UK to Saint-Jean-de-Luz in southern France to run a B&B overlooking the Atlantic coast. Find out how he did it and what life is like as a B&B owner in France

How did you end up running a B&B and why in Saint-Jean-de-Luz?

My background is in property and construction. It was actually my father who built our B&B, Maison Tamarin, in 1999 and after completion it was initially run by my sister. I’d originally moved to Saint-Jean-de-Luz to play a bit of rugby, as I used to play at quite a high level. The lady who was then running Maison Tamarin for my father had just left, and so I thought I’d give it a go, and I enjoyed it. That was six years ago, in 2009, when I was just 26 years old.

Why is the B&B called Maison Tamarin?

It’s because my grandmother is Mauritian – she was born in Mauritius, in Tamarin – and when we were looking for a name, we decided that we wanted to name it after her. She spoke French, but she didn’t speak French to us unfortunately!

What prompted your father to buy the land in Saint-Jean-de-Luz and create a business?

We used to visit the area as children and we really liked it. Our time was spent surfing or hiking in the mountains. It’s just such a beautiful part of the world and we really enjoyed it here as kids. A bit of land caught his eye and he couldn’t resist it. My father is a builder by trade, and has been so in Edinburgh for the past 20 years, as that’s where our family are from originally. For a time we almost ended up living in Saint-Jean-de-Luz. When I was about four years old, I went to primary school here for a bit, then for various reasons, as a family we had to go home. I was probably in primary school for about five months in total.

How fluent are you in French?

I’ve learnt French from speaking it rather than studying it. I had the basics from school but also learnt a lot trying to speak it here on our visits when I was here as a child. Eight years ago I went to Paris to play rugby for a year thinking I could speak French; I quickly realised that I wasn’t that good!

The day starts pretty early. I go out to get the bread from the boulangerie, do a bit of baking, then set up the breakfast table before heading outside to check the pool. We do breakfast, serve coffee, make sure everyone’s happy and have a chat with guests about the area and answer any questions they might have, or see if they need anything. We’ve just started doing tapas at night where we serve our guests local produce and some great local wines, so they can book in for that. When the guests have departed in the morning, we clean and sort all the rooms, do a bit of gardening, maybe go for a shop to replenish supplies, then wait for people to arrive back in the evening.

We have eight rooms; our occupancy rate isn’t bad, and we can take up to 15 guests at any one time. We’re open nine months of the year. We’re shut in January, February and March, then re-open in April. It’s quite a long season! Holidays are our busiest periods, then we also do a lot of weddings, which tend to be in June and September. The Toussaint holiday (All Saints’ Day – a bank holiday in France) in November is a very popular time for bookings, and we get a lot of Spanish trade from that too.

Well, it’s your own business so you can make it as successful as you want, by choosing to work as hard as you want. Here in Saint-Jeande-Luz, it’s a very good style of living. We have a fantastic view of the beach, then you have the mountains and the sea. There’s a lot of guest contact, which is lovely. It’s why a lot of people in the industry do what they do. There’s no getting away from the fact that it’s a lot of work though! The day never stops. You answer phone calls all day – and you also have emails that you have to juggle between doing other things such as food shopping. You have to be available to clients and potential customers as much as possible to make it work. There’s very little time to yourself to really relax. You don’t have a day off, unless you do very well and you’re in a position to have some great staff to help you. That said, employing people in France isn’t the easiest thing either. There are a lot of rules and procedures; it’s a big learning curve. France is a very bureaucratic country and there’s a great deal of paperwork. Luckily I’ve had some great advisers, but if you’re badly advised it can go very wrong.

Do you live on-site or elsewhere?

I live about five minutes away from the B&B. The best thing about living where I do is the amalgamation of it all: the sunset at night, the lovely climate and the great people. I love the rural parts of the area: the food is great, Spain is 20 minutes away. There’s a real variety of activity, with lots of things to do: surfing, golf, walking, cycling, mountain biking.

In your opinion, what is the cost of living in Pyrénées-Atlantiques?

My lifestyle here would cost about three times as much – or even more – in a UK city. Property is reasonably expensive, schools are a good standard, the health care system is good and I think the quality of living is a lot better. You don’t really have to go away on holiday; you sort of already are! You don’t have to go far to feel like you’ve got away from it all.

www.maisontamarin.comThinking of starting a B&B in France? Read our guide: How to set up a B&B or gîte in FranceRead about other expats who are living in France: A family in Biarritz and a couple running a gîte in the Marais Poitevin