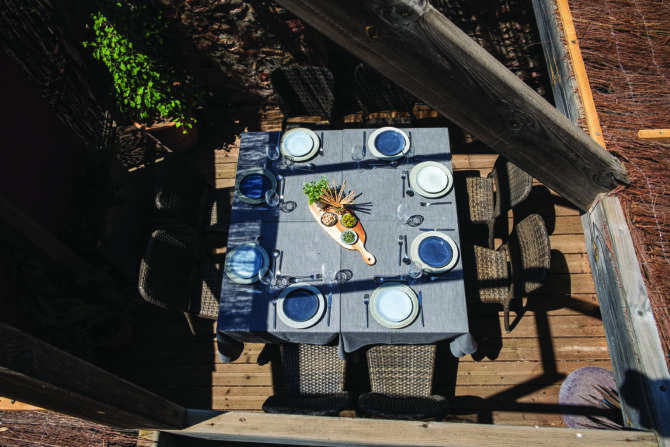 In the Aude, Nicola Venning meets an expat British chef who won over the French with her fish and chips

Linda Wearn is expecting a busy summer. Her French cookery school and catering company, La Table d’Emilie, in the village of Caunes-Minervois, is near popular tourist sites such as the Canal du Midi and Carcassonne and she expects some of those visitors will book her classes.

The holiday gîtes and second homes in this winemaking area of the Aude are already filling up. “There are lots of expat owners, as well as South Africans, Australians, New Zealanders, Dutch and Swedes who have not been here for two years (because of the pandemic), who I think we will see. Some are already here,” says expat Brit Linda, a trained chef who caters for events, birthdays, special dinners, picnics and does “welcome meals” for holiday homes.

Besides this, she has a steady stream of French customers who book her services for weddings and other occasions. Many were customers from her original business, La Table d’Emilie restaurant which she ran before the pandemic. One of them was a manager with Crédit Agricole bank.

“He booked me to provide the canapés for one of the company’s events last autumn. I cooked over 7,000!” says Linda. The event was a huge success – no surprise given that her restaurant was too (check out the reviews on Google!).

“I’ve always had a really good French clientele. The vignerons (local winemakers) would come in regularly for lunch for the menu du jour,” she says. Linda had a prix fixe menu which changed daily. “I always had fish, vegetarian and meat options. Duck confit was always popular as well as Petit Salé sausage and lentils.” Often she served 30 to 40 covers just at lunch time, especially during the summer when the restaurant expanded outdoors.

However, it was not always like this. When Linda opened La Table d’Emilie, locals were wary: she was competing against restaurateurs in the nation which gave us haute-cuisine, after all. And she was from a country which, traditionally, was not renowned for its culinary expertise.

“At first the vignerons were quite fussy but once I won them over they left quite content,” she says. As her confidence and clientele grew, Linda began to add English dishes to liven up the French traditional fare. “One vigneron particularly liked my red cabbage with cinnamon. Another just adored lemon posset.”

One of the most popular dishes was good old British fish and chips – “All the French loved the beer batter!” Another was a baked cheesecake: “At first my French customers were unsure – why put cheese in a cake? It sounded horrible to them. But then they tried it and now they all love cheesecake.”

Linda ran La Table d’Emilie for eight years before deciding to change direction. “I always meant to do more catering but the restaurant took over. I am now re-setting with catering and a cookery school. Some of the local people were like, ‘what have you done that for?’… to the point that really good customers (of the restaurant) almost don’t talk to me now!”Linda is a French resident with a carte de séjour and her company is properly registered. “I paid into the French system, thank heavens, and got financial help over Covid and during lockdown.”

When they were allowed to open again, she and her then partner turned the restaurant area into a cookery school. Her main outlay was putting in a large new workstation and extractor fans. “I had to make countless little decisions like whether to use gas and have regular gas bottles or stick with electricity.” In the end she decided to opt for electricity (though gas is generally preferred by most chefs). She estimates the conversion would have cost €10,000.

Linda is not fluent in French but can “get by” and she used a local accountant to help with the registration of the business. “I called on friends who are really good with paperwork. A photographer friend helped build the website and we photographed the food for it – it was a good thing to do during the restrictions!” she laughs.

Originally from Weymouth with a formal qualification in catering, Linda spent several years cooking in Britain and Austria while keeping a holiday home in Caunes.

When she moved to France permanently, she decided to sell the property and buy a larger village house which she converted into the restaurant. She lives above it in her own flat with her daughter Emilie, 15, and son William, seven, and their dog, Mixi. “I don’t have a garden, just a terrace which is enough for me to look after! And I take the dog for walk up the Montagne Noir, where I can see the Pyrénées. It’s just stunning,” she says.

The restaurant took off very quickly, and not just because of the excellent cooking. Linda also chose her location very carefully. La Table d’Emilie is in the centre of the village and therefore easy to find and handy for any passing trade. Caunes is popular with tourists as it has a pretty medieval centre and abbey, which was built with its renowned red marble (also used at Versailles). “It’s an interesting village. There are people of a varied background and a lot of artists, sculptors and musicians, so there’s always plenty of custom.” The only other cookery school in the area closed recently when the couple running it, retired.

Another factor which helps is that Linda is able to source quality food relatively easily. Caunes has a good local butcher and Linda buys from local growers and farmers. “They send me a list of what they have and I choose what I want. It is generally all organic.”

She also uses an association that helps rehabilitate prisoners into work by growing vegetables and they often have a good seasonal choice. “I go to our local market too and pick whatever is good. I don’t go to the main Carcassonne market as it tends to be quite touristy and busy.”

One aspect of her work that she really enjoys is creating a menu for her clients and trying to do something “a bit different” from the other traiteurs. At one recent wedding, rather than the usual assiette de charcuterie, she served a starter of rabbit terrine with prunes and pistachios with her homemade red onion chutney. It was a huge hit. “Sometimes the client is happy to give me an outline and then leave it up to me to make a menu. It lets me be creative. And I love it.”