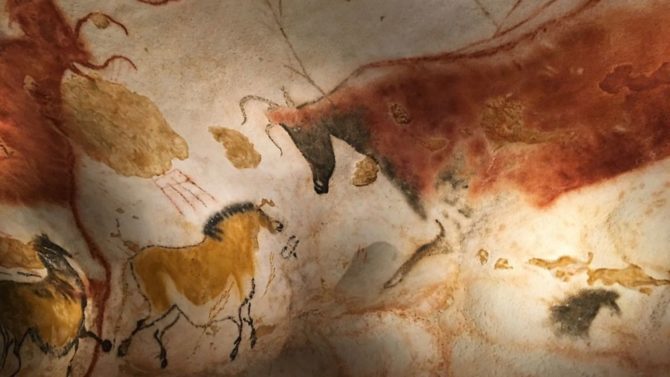 The world’s oldest piece of figurative cave art was recently discovered in a limestone cave in Borneo. The scene, depicting what appears to be a type of ancient cattle could be more than 40,000 years old if scientific measurements are correct.

But you don’t have to travel as far as Borneo to see impressive prehistoric artworks, France has more than its fair share too. Let’s take a tour of the country’s underground treasures…..

It sounds like something straight from the pages of an adventure story: a group of inquisitive schoolboys and their dog stumble upon a mysterious hole in a forest in 1940 that leads to a discovery of international significance. Almost eighty years later, La Grotte de Lascaux in the Vézère Valley remains home to some of the world’s foremost examples of prehistoric paintings – and it’s just one of many caves in France that have been concealing artistic treasures for millennia.

Just last year, a team of American archaeologists made the breakthrough of their careers in a Dordogne cave called Abri Cellier, where they found 16 stone blocks featuring 38,000-year-old pointillist engravings. Crafted by the Aurignacian, the earliest modern human culture in Europe, the find was particularly astonishing because until then, the technique known as pointillism was only believed to have developed in the late 19th century.

It is not just Dordogne that is a treasure trove of cave art: deep in the Lot Valley hides the Grotte du Pech Merle, notable for being one of the few caves whose art remains on display to the public. Here, a menagerie of animals – mammoths, horses, bisons, stags – dance across the walls of a kilometre of galleries, some dating from the Gravettian period around 25,000BC.

Ariège, which has the largest number of prehistoric caverns of any département in France, also boasts authentic parietal (cave) art still on view in the Grotte de Niaux. In the haunting glow of torchlight, visitors can marvel at the stone canvas covered in vivid drawings including a rare charcoal sketch of a weasel, dating back to between 17,000 and 11,000 years ago during the Magdalenian period.

Why is France one of the world’s cave painting capitals? “Its creators were relatively numerous in southern France because the climate was not as severe and populations were able to stay put – probably in greater numbers than in the northern European plain,” said Professor Paul Pettitt, Professor of Archaeology and cave art specialist at Durham University. “Cave art was an integral part of the way Upper Palaeolithic hunter-gatherers survived in the wild environments of Pleistocene Europe. Creating it, celebrating the prey animals it depicts, and sharing themes and styles kept small groups together in a dangerous world.”

But when nature is your art gallery, problems can arise when humans intrude. Sadly, the biggest threat to cave art appears to be tourism.

From 1948, Lascaux welcomed around 1,200 visitors a day who would come to admire the artistic endeavours of the Cro-Magnon man; unfortunately, they left behind the harmful calling cards of humidity, moisture and carbon dioxide. Visible damage, such as lichens and crystals, could be seen as soon as 1955. The environment became so precarious that in 1963, France’s Minister of Culture, Andre Malraux, closed the cave to the public. The paintings were restored to their original state and careful daily monitoring was introduced. But the introduction of a new air conditioning system in 2001 led to white mould spreading across the cave ceiling and walls. The opening of two facsimiles, Lascaux II in 1983 and Lascaux IV in 2016, have seemed like the ideal solution; all the tourism income with none of the environmental damage.

The Grotte Chauvet-Pont d’Arc in Ardèche, home to the oldest figurative cave art in Europe dating back an estimated 30,000 years, has been sealed off to the public since its discovery in 1994, only allowing entry by a small handful of people each year including experts and journalists. All must be kitted out in extreme protection gear. A copy, which opened in 2015, is the largest cave replica ever built. The art is reproduced to its actual size, but in a condensed area in a circular building above ground a few kilometres from the actual cave. It is ten times bigger than the Lascaux facsimile.

These recreated caves and the pseudo-historic artwork inside have been a cause for consternation. “No art lover wants to see a replica Rembrandt, a fake Freud or a simulacra of Seurat,” said the Guardian’s art critic Jonathan Jones when Chauvet’s facsimile first opened. But it was surely better than the alternative: no art at all.

It is not just tourism that has had an impact; even supposed caretakers have accidentally caused damage. In the Grottes d’Arcy-sur-Cure in Burgundy, some of the paintings lay undiscovered until the 1990s, hidden under a layer of smoke. When they were finally revealed, it became apparent that regular cleaning with high-pressure hoses over the decades had done untold damage. In another unfortunate incident, this time in the Magdalenian Grotte de Bédeilhac in Ariège, the cave’s gigantic entrance saw it used as a military base during the Second World War. First occupied by the French military and then by the Germans, the latter levelled the cave floor and laid a concrete base which harmed some of the paintings in the side galleries.

With lessons learned from the past, preserving these caves for future generations is high on the agenda. In 2009, an international symposium in Paris organised by the French Ministry of Culture called ‘Lascaux and Preservation Issues in Subterranean Environments’, saw 300 experts sharing scientific research gained from studies in Lascaux and beyond to encourage better cave art preservation.“The original Grotte de Lascaux will for certain never reopen,” was the gloomy prognosis from Denis Tauxe, Lascaux’s resident historian. But whether it be in the authentic cavern or an intricate replica, hopefully a new generation of history enthusiasts will be able to experience the art of their ancestors.

The enchanting tale of Robot the dog leading his companions to ancient treasures lures hundreds of thousands of visitors to the Vézère Valley each year. While the original caves that 18-year-old Marcel Ravidat and his friends first glimpsed are closed, the impressive facsimile (Lascaux II) and new international centre for prehistoric art (Lascaux IV) are the next best way to experience the art. Admission €17

This €55 million recreation of the original Chauvet cave reproduces its twists and turns to give visitors an authentic sense of being deep underground, despite being located in a large shed near the picturesque Pont d’Arc. The hour-long tour along a raised walkway passes 27 panels featuring drawings or engravings of 15 different species of animal. Workshops and demonstrations for all ages bring to life the prehistoric world of the cave’s painters, giving visitors the chance to craft ancient jewellery and music instruments. Admission €15

Since 1926 visitors have flocked to see these dramatic murals secreted deep within the hillside at Cabrerets. Look out for the bears’ lairs dug into the clay, where animal bones were found. It’s worth checking out the accompanying prehistory museum too, where you can find more about other paintings in caverns that are closed to the public. Admission €13

The 800m trek into the cave in torchlight is well worth the glorious Magdalenian paintings that await in the great cavern. It’s a must-visit for those who want the authentic cave art experience. Make sure to wear sturdy shoes as the ground is understandably potholed and very uneven, and bring warm clothes too, as the temperature is 12°C all year round. Admission €12 09400 Tarascon-sur-Ariège www.sites-touristiques-ariege.fr/sites-touristiques-ariege/grotte-de-niaux