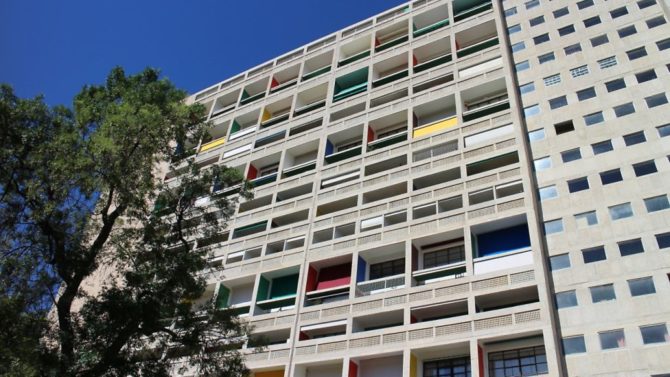 The great architect Le Corbusier’s apartment in the Immeuble Molitor in the 16th arrondissement of Paris, where the artist lived for over thirty years, has recently reopened to visitors following a two-year restoration. The Fondation Le Corbusier began the project in 2016, and the apartment now reflects how the architect actually would have lived with his wife Yvonne and dog Pinceau. Despite the fact that Le Corbusier was actually Swiss, some of his greatest works can be found scattered across his adopted home country of France. Every one is well worth a visit. www.fondationlecorbusier.fr

Arguably Le Corbusier’s most famous edifice, the Cité Radieuse (also known informally as La Maison du Fada or ‘Nutter’s House’ in the Provençal dialect) in the south of Marseille still stands today as a testament to the architect’s ethos of combining perfect form and function in one design. Visitors can go inside one of the building’s 337 apartments to see for themselves the light streaming into the compact space, thanks to large windows and the building’s east/west facing orientation. The space may be small, but everything has its place in the design, and the overall effect is surprisingly not cramped. The corridors of the building were constructed to house shops and community spaces, some of which are still active. The tower block even houses a hotel – still operating today- to allow for guests to visit the space-limited apartments. Up on the roof is one of the building’s largest community spaces, with views out to the hills and sea beyond. Here, yoga, fitness classes and other activities take place at all hours of the day. This sense of the building being a community was one of the most important considerations for Le Corbusier when he designed it, and it still endures today. Even the gardens have been reinstated, with vegetables and produce grown by residents for their own use. Apartments occasionally come up for sale, from as little as €340,000, a bargain for a piece of architectural history with Unesco status.

This social housing project near the city of Bordeaux was the brainchild of Henry Frugès, a philanthropic industrialist who wanted to provide everyone with housing, regardless of their financial situation. When the fifty homes were built in Le Corbusier’s distinct style in 1929, there was outrage from traditionalists; now the site is proudly Unesco-listed. You can visit the Maison Municipale here on a free guided tour at the beginning of each hour every Wednesday and Saturday.

This striking, spaceship-like church was Le Corbusier’s last major work, completed forty-one years after his death in 2006. After decades-long political conflict, the project was eventually completed with the help of French architect and Le Corbusier protégée José Oubrerie. Over the years it has taken on many forms including a school, a church and most recently a cultural venue. www.sitelecorbusier.com/en

This distinctive Dominican Order Priory near Lyon, completed in 1961, is a monastery like no other. Its curiously modern design has seen it become a site of pilgrimage for architecture fans; you can even spend the night here. There are 100 bedrooms, located on the highest level of the structure, while below are a dining room, library, church, and study and leisure rooms. www.couventdelatourette.fr

Built on the edge of Paris between 1928 and 1931, the Villa Savoye is considered to be one of the finest examples of Le Corbusier’s five point manifesto for modern architecture. The villa was built using reinforced concrete as a country retreat for the Savoye family, but became the property of the French state in 1958, and an ambitious renovation project began in 1963. Highly unusually, the building was listed as a historic monument in 1964, while Le Corbusier himself was still alive. Today the villa is open to visitors. www.villa-savoye.fr/en

This urban development is built along the same lines and is part of the same landmark housing concept as the Cité Radieuse in Marseille. The apartment block in a suburb of Nantes has a similar style to the Marseille building, but with only 294 units and it lacks the retail level that contributes to such a community feel in Marseille.

It may only be a small wooden cabin, but this little holiday home still demonstrates the architect’s commitment to maximising convenience and happiness in all living spaces. The surrounding gardens are a reflection of the same ethos as the compact cabin, which is decorated inside with colourful murals by the artist. Due to the fragile nature of the space, which is currently undergoing renovation, tours are available by prior booking only. www.capmoderne.com

This pair of elegant houses built in the 1950s in the upmarket Parisian suburb of Neuilly-sur-Seine are actually private homes, and therefore not open to visitors. There’s nothing to stop you wandering past nonchalantly to see the mix of raw concrete and rough brickwork, though!