Why water on the table is as French as wine 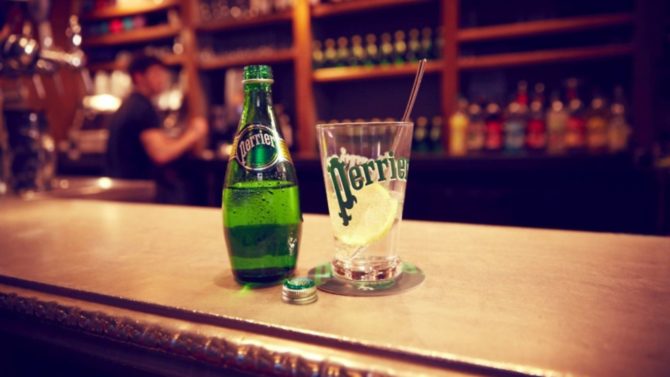 Along with wine, bottled natural water has an important place on the French dining table, as Howard Johnson explains

Is there anything more exciting than sitting down to eat in a French restaurant? The anticipation of culinary delights and the challenge of finding the right wine to accompany the meal always give me a thrill. But there is another component of the French dining ritual that is equally fundamental to the experience – water.

In France, a waiter who forgets to bring water to the table risks being given a poor tip. Why? Because the French see water as an essential part of the dining experience, designed to refresh and cleanse the palate between courses. They also recognise that water is beneficial to our health. Whether it is from the tap, or still or sparkling in bottles, the French always demand their water ‘à table’.

Given the country’s vast natural resources, it is hardly surprising that France is one of the world’s largest consumers and producers of bottled waters. In 2016, the French drank 8.3 billion litres of bottled water – either mineral (eau minérale) or spring (eau de source) – which works out at 124 litres per person. The business plays an important role in the economy, with more than 10,000 employed directly in the sector and another 30,000 indirectly.

What are the similarities and differences between mineral water and spring water? Both come from deep underground sources where there is no chance of it being infected by human pollutants and both are naturally suitable for consumption. They are bottled in their area of origin and are never chemically treated. The key difference is that while mineral water has a fixed and stable mineral content, spring water does not. This means that certain brands’ spring water can contain differing amounts of minerals, depending on the location of the source. So while the Académie Nationale de Médecine (which is responsible for answering government questions related to public health) recognises the health benefits of mineral water, it does not recognise them in spring water because of these variables.

Where do bubbles come into the equation? Again, there are two types: water with bubbles that occur naturally at the source (‘eau naturellement gazeuse’, such as Perrier) and naturally still water that has its bubbles added at the factory (eau gazéifiée, such as Badoit). Drinking fizzy water with a meal can aid digestion because it is higher in bicarbonates, which reduce levels of acidity in the stomach.

The benefits of mineral water have been known since at least Gallo-Roman times, when the natural sources at Saint-Amand, Saint-Galmier and Vergèze were spoken about. In the Middle Ages, pilgrims heading for Santiago de Compostela built a chapel at La Salvetat in Languedoc near the source of naturally occurring carbonated water.

In the 18th century, mineral water started to become popular as interest grew in its healing properties. Then, in the 19th century, an enthusiasm for thermal baths and cures – promoted as a way of combating rheumatism, digestive issues and skin problems – gave rise to a burgeoning industry in France, and chemists started to sell bottled mineral water to sufferers.

It has now been proven that the naturally occurring minerals have clear health benefits. Calcium and phosphorus are good for the bones, magnesium stimulates the immune system and boosts white blood cells, and potassium can help maintain a strong heart. The consistent amounts of each mineral found in any particular water, the result of years of slow filtration through underground rocks, give each water a unique composition that reflects the land that formed it, and give it a subtly different taste too.

Tap water also contains minerals, but there are strict guidelines in France about how much of each mineral a litre of tap water can contain. Also, tap water contains chlorine to eliminate any bacteria that might be lurking in the rivers or streams from where it’s collected, which you should never find in mineral or spring water. Because bottled waters are not treated in the same way as tap water, they are rigorously tested at various stages of production to ensure they are safe to drink.

The industry is fiercely competitive, with manufacturers always looking to make claims about the miraculous properties of their products. From Evian’s slogan ‘Votre cure jeunesse’ (your rejuvenation treatment) to Vittel’s ‘ReVITTELisez-vous’ (reVITTELise yourself), they all want to promise health benefits, particularly when it comes to losing weight. Contrex, in particular, plough this furrow with the slogan ‘mon partenaire minceur’ (my slimming partner). But it is a difficult claim to back up.

“All water – be it mineral, spring or tap – helps with slimming,” says Jean-François Munoz, the director of the Laboratoire d’Hydrologie de Nancy, a government institution designed to safeguard public health related to water. “That means you have to be sceptical of the claims made by manufacturers that their particular brand can help you slim. What’s most important when it comes to losing weight, is to have a balanced diet. Water can certainly help to maintain that, particularly with regard to your mineral intake.”

Each of us needs a different mineral intake according to our age, lifestyle and level of physical activity. A healthy adult can take on water that has either low or high mineral content, but may find that water containing a greater amount of magnesium can help overcome general tiredness. Older people, meanwhile, might want to look to water that has greater amounts of magnesium and calcium, as these minerals can help to diminish the risk of osteoporosis.

There are issues of taste when deciding what water you like, too. It is logical that you will detect the minerals more in waters that have a high mineral content. Perhaps that explains why some of France’s biggest brands do not contain the highest amount of minerals, because that way they can appeal to the greatest number of people. According to the website of Nestlé Waters France, the umbrella group for the likes of Perrier sparkling water and Vittel still water, neither of these brands is high in minerals. That honour falls to Nestlé’s less familiar Hépar and Contrex brands.

Following the lead of wine culture, water connoisseurs are starting to emerge. Thierry Masurier is a director of Eaux du Globe (‘Waters of the World’), a company that sells 80 types of water sourced from around the world.

“We’re helping French people discover water from all kinds of different territories,” he says. “We sell water that costs €2 and water that goes right up to €125. We want people to dream of distant places and discover different tastes.”

Whether the French nation as a whole is ready to move from seeing water as important to healthy living to embracing it as a genuine gourmet experience is still open to question – the super-expensive waters currently in vogue around the world are generally not French products. But in a survey, nearly two-thirds of French consumers said they preferred the taste of mineral water to tap water, so who knows where this affection for bottled water might lead?