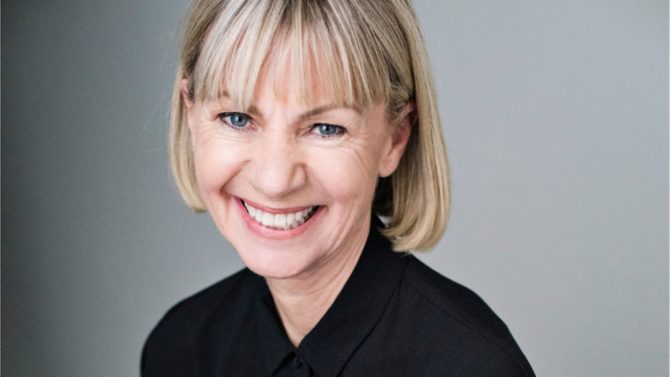 Kate Mosse was a guest speaker at the Cheltenham Literature Festival in October 2018 and spoke about finding inspiration for her latest book – and beginning of a new series of novels set in France – The Burning Chambers.

Far away from her usual stomping ground, Kate Mosse was sitting in the back of a car in the town of Franschhoek near Cape Town in South Africa when she saw something astonishing. On the side of a road, a sign read ‘Languedoc’ though she was thousands of miles away from that area of France she knew so well since her historical series Labyrinth. She was in the Cape for a literary festival and, with the little spare time she had, decided to find out how a small piece of southern France came to be implanted in South Africa.

Franschhoek itself also had a French quarter and a Huguenot Museum, which she visited to find out more. There, engraved on the wall, was the name of one of the characters she’d written about in Labyrinth. “And at that moment, I knew,” Kate told a captivated audience at the Cheltenham Literature Festival. “I knew that I had to write the story of how these French Huguenots came to be in Franschhoek, so far away from home. And as I looked up at the landscape, I realised that even the mountains looked like those in Ariège and Aude.”

Inspired, she set off researching the history of the Huguenots in France and the wars of religion of the 16th century. The result is The Burning Chambers, the first instalment of an epic story spanning 300 years and taking readers on a voyage from France to South Africa.

It is a Romeo and Juliet story of forbidden love between Minou, a Catholic and Piet, a Protestant, who meet in Carcassonne. To the backdrop of religious wars, the massacre of Toulouse and the persecution of the Huguenots, The Burning Chambers is also a story of a religious relic and a violent feud between two families that lasts centuries. It begins and ends in Franschhoek, South Africa.

As in Labyrinth, Kate has written a story of fiction to the backdrop of historical facts. “Researching with history books, in museums, archives and local history give the story texture and flavour, but ultimately, it’s about storytelling,” Kate continued. “I want my novels to have a sense of place. Writing historical fiction is about standing in somebody’s shoes at the time.”

She explained that, as a writer, she tried hard not to have your 21st century eyes on 16th-century France. Speaking about her female characters in the book, she had this to say: “You have to immerse yourself and accept the traits of the time, however difficult – husbands, for instance had the right to beat their wife. I’m not writing politics. It’s storytelling. It’s finding stories of women that were true but not recorded because they were not part of the power struggle during the wars of religion.”

After The Burning Chambers, three more books are to come, Kate promised, though she doesn’t necessarily know how they will unfold. “I let the story come out,” she said. “I need the fear of not quite knowing.”

And if she could travel back in time, who would she be, a member of the audience asked. After a pause, “I’d like to be in the head of Catherine de’ Medici. Her four sons die. Then she is regent for child, surrounded by powerful people. It’s impossible to really know who she was.”