This renovated farmhouse attracts guests from all over the world 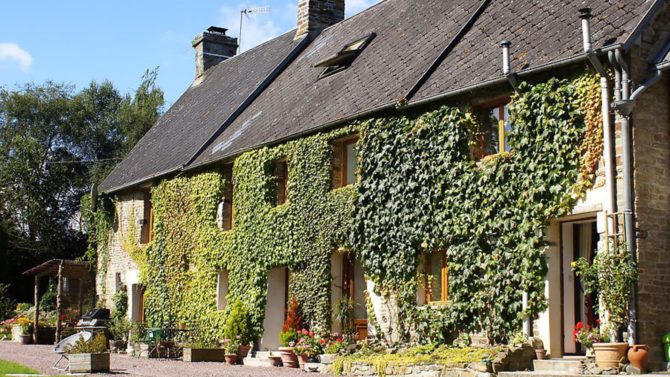 When Lin France and her husband Geoff moved to La Suisse Normande in Calvados they took on a major renovation project, turning a derelict building into a lovely home and a holiday accommodation business

When did you move to France and why did you choose Calvados?

We came here 10 years ago having visited the area many times, as we have friends who were living here and had their own lavender farm. We happened to see this ancient longère near to where our friends lived which was for sale, and at that time we were in the process of taking early retirement. We decided that it would be a good idea to buy something that we could renovate and turn into a lovely home, which we have since done. We bought this place and moved over lock, stock and barrel from Salisbury with our two dogs.

How much renovation work did you have to do?

We had to stay in a gîte nearby when we first came over because the place was uninhabitable. It had been derelict for about 15 years when we bought it, so we really had to start from scratch. There was no electricity, water or septic tank and in fact it didn’t even have floors or ceilings. What we bought was basically four walls and a roof – that was it! We thought it would be a good idea because although we were retiring, we were taking early retirement and were still quite young and active, and we wanted something to do. So we took this on as a project.

It ended up being an awful lot more than we had anticipated but then these things usually are. We stayed in the gîte for about six months while we did enough to make it habitable and then we moved in and renovated as we went along, which we did over the next six or seven years. We were also working on the garden at the same time. Geoff dug out a lovely pond which is now home to about 40 goldfish and we now also have a beautiful terrace, seating and barbecue area.

Did you do the work yourselves?

We used professionals for the electricity, water and septic tank installation but apart from that we did the majority of the work ourselves, with help from friends. We have quite literally rebuilt the whole place and we felt we could take this on because we’d had previous experience of renovating. When our home in Salisbury, a Grade II-listed barn conversion, was destroyed in a fire we worked with professional builders to rebuild it, and we learnt a lot of skills during the process.

Did you always intend to run a B&B?

No not at all. We didn’t have children or lots of family who would be coming to visit, so originally the plan was just to make this a really lovely home for us to live in. However it’s such a big house and once we’d done the work we decided that we had to do something more with it as it was too nice not to.

First of all we developed one small gîte out of what was the stable. We started off with one and rented that out for a couple of years while we carried out work to create a second one. The house is built into the side of a hill so our living accommodation is on one level with its own entrance and the gîtes are underneath, which means they’re self-contained and quite separate from us.

Our guests are welcome to bring dogs and other animals – some even bring their cats! The gîtes have kitchens so guests can self-cater, or we also offer B&B and table d’hôtes if they’d prefer us to do the cooking.

Was this something you already had experience of?

Not at all, but we were always entertaining at home for Geoff’s work and regularly had people coming to eat and stay. I love cooking and we both had ‘hosting’ personalities. You do need a certain kind of personality to welcome total strangers into your home and make them feel comfortable. Running this kind of venture involves a lot more than cleaning and changing beds, you have to be able to engage with people too. We knew we’d be able to do something like this, which is why we went for it.

What attracts people to Calvados?

There’s so much to see and discover in this part of France – the D-D Landing beaches, the Bayeux Tapestry and of course the historical connection with William the Conqueror. Everything is within about an hour’s distance maximum from where we are so you don’t have to go very far. Caen and the beaches are about 50 minutes to an hour away while Falaise is about 40 minutes. There are lots of lovely public beaches, including one at Ouistreham where the ferry comes in from Portsmouth, which is also only 50 minutes away. It makes life easy for the people who come from the north of England as they tend to take a day travelling down to Portsmouth and stay there overnight, then get the ferry and are with us early the next day. Our guests come from all over though and we have a mix of nationalities, including Dutch, Belgian and American.

What appeals to you about this part of France?

We live in La Suisse Normande and I love it. It’s very much like Dorset, with lots of hills and very beautiful views and countryside. It’s a farming community here so it’s very rural but there is a town within 2.5km.

Have you found it easy to integrate into the local community?

I speak French so that does help. I spoke relatively good French when I came here but obviously the longer you live somewhere, the better you get. Geoff doesn’t speak French – he says he doesn’t need to as he’s got me!

All of our French neighbours are just delightful and we’ve integrated well with them. I think having a little business in the area means they can see we’re contributing to the economy and the community, which gives us a nice reputation. Geoff enjoys growing dahlias and a few years ago he thought he might as well sell them as he had so many, so we put a sign outside the gate and people pop in. We didn’t want to move to an area where everyone was English so we’re quite pleased that there aren’t many English people here, but we’ve become friends with those who do live here.

What do you enjoy about the French way of life?

There’s a very laid-back attitude here in France and the best thing of all is the lack of traffic. It’s just wonderful. We travelled to Caen this morning on one of the back roads and we only saw four or five cars on the entire journey. One of the bugbears we have when we get off the ferry in Portsmouth is that we’re immediately faced with cones, roadworks and diversions and the volume of traffic is a nightmare. You really notice it when you don’t have to live with it.

The healthcare here is excellent too, and then of course there’s the cheese and wine! It’s great going to a French market because all the families come out to meet each other and stand and have a chinwag for a couple of hours, blocking all the lanes while you’re trying to get your potatoes and tomatoes. It’s what they do and we love it.

Do you have plans to do any more renovation work?

There is one more room to renovate if we really wanted to, which could be another en-suite bedroom. It’s at the far end of the house in a part that hasn’t yet been touched, and every time we go in there we remind ourselves that this is what the whole house looked like in the beginning. We wonder at our sanity when we took it on! We were 10 years younger then of course and we wonder if we’ve got it in us now, but we may do it before we move on. Recently we were discussing whether it was time to sell up and retire, which is what we planned to do in the first place! We would definitely stay in France though. Why would we want to go anywhere else?

Previous Article How much does it cost to renovate a house in France?
Next Article Kate Mosse on her latest novel The Burning Chambers