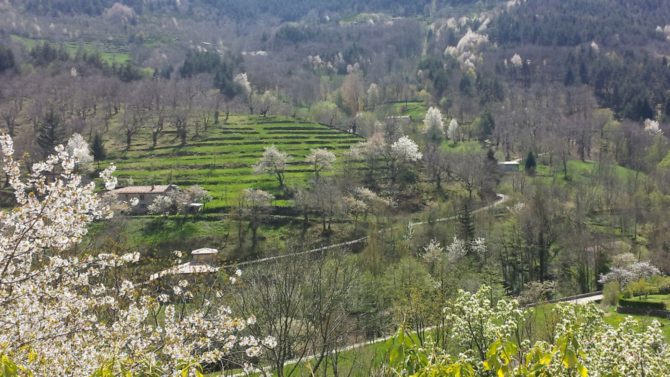 Leslie Rayney and Teo Leyssen enjoy a serene, rural lifestyle in the Ardèche mountains. This sounds idyllic and is a dream for many but what is it really like to live in the middle of nowhere in France?

When an English lawyer based in London and a Belgian whale watcher, who has spent the previous seven years on a boat in the Hebrides, met on holiday in Mexico and fell in love, they had to find a middle ground fairly quickly for their future life together. For Leslie Rayney and Teo Leyssen, it turned out to be a tiny hamlet in the rural village of Albon in Ardèche. It hasn’t been easy but they wouldn’t have it any other way…

Why did they choose a tiny rural village in Ardèche?

The location for their new life together could have easily been Somerset, although the house prices were very expensive, or Scotland where Teo was offered a job at the university. But then the couple went on holiday to Ardèche where Leslie had spent two idyllic summers as a child, and their thoughts turned towards a new life in France.

“I spent two summers with my mother and brother in a village called Sceautres, just opposite Alba-la-Romaine,” says Leslie. “The house we stayed in was completely dilapidated, next door to the bell tower. It belonged to a friend of my mother who lived down the road from us in Oxford – it had been her grandfather’s house. We drove down, met them here and spent two months just running around the fields and mountains, totally free, getting the milk from the farm every morning. I loved it! That’s why I wanted to come back for a holiday.”

Teo admits he didn’t even know Ardèche existed before his first visit, and even though they spent two slightly chilly weeks camping in March, he was equally charmed by the region. So, they returned with a map of Ardèche divided up into quarters and set about discovering each area to see where they wanted to live. Soon, they spied a house for sale in a brochure picked up in a bakery, arranged a visit and bought it. That was in November 2003. They moved to France in May 2004.

The joys of living in rural France with children

The difficulties of finding work in rural France

It all happened rather fast, and Leslie and Teo both admit they were lucky that things turned out so well, because the house was in a remote location, at high altitude, and in a very rural part of Ardèche where jobs are not ten a penny, to say the least.

“Having bought a house with a mortgage, we made sure that we would be able to get by for a year and a half,” explains Teo. “You need that contingency because you can’t just turn up and get a job – it doesn’t work like that, especially in a rural area. I think a year is really the minimum that you must allow yourself enough money to get by.”

After 20 years working as a lawyer, Leslie was ready for a change. Teo, also, after several years travelling and then whale watching, was content to look for a job that might use his skills (as well as his scientific work on the boat, he is a qualified engineer).

The onus was more on Teo to get a job given that he spoke good French. His native language is a Flemish dialect, but in Belgium they were taught French from a young age, and the lessons were in French. He also speaks German, English and Italian.

Initially, he had a few odd jobs as an electrician, however it was clear it wouldn’t provide a viable living. After a year, he discovered by chance a small company specialising in industrial automation in the next-door village, in the middle of nowhere, on the road leading to the Ardèche plateau. The company’s owner had set up his business initially in Marseille but returned to his home village after a few years.

“I didn’t know the company existed, otherwise I’d have gone to see them – their work is what I used to do for 10 years as an engineer. It’s just ridiculous that it exists here,” he laughs, recognising just how lucky he was. With clients based locally, nationally and overseas, Teo tends to spend half his time at home and half on jobs further afield.

For Leslie, the language aspect was harder, having just school-level French. She knew it would be hard to get a job with minimal language ability but, determined to make a success of her new life, she took on cleaning jobs and worked for a while selling cakes on the local market.

“I was so excited when a farming neighbour said I could sell things on her stall. I mean, the market – I couldn’t sleep for the excitement!” says Leslie, laughing even now at her enthusiasm.

She continued discovering new ways to earn a living. The cleaning led to a cooking job (“I used to turn up and the woman would say ‘here’s what I’ve got, what are you going to cook?’ – it was like being on Ready Steady Cook.”), which led to caring for an elderly couple, which led to gardening. For the past five years, Leslie has looked after gardens for several local people, while also giving yoga classes and training in osteopathy.

Different ways to earn a living in France

Earning an income from a gîte business

As well as their work, there is the income from the gîte, which has had a mixed CV after getting off to a flying start. Rentals were good up until around 2012 when the economic crisis hit the Netherlands – most bookings were from Dutch tourists, as the couple had marketed the gîte primarily on Dutch websites. Suddenly, they went from renting for 13-15 weeks of the year to just two or three.

Then last year, they marketed the gîte on Airbnb and the popular French website LeBonCoin.fr, and they now have bookings for almost a third of the year. Decorated in a pretty, simple style, and with no swimming pool and few activities close by, the gîte appeals to holidaymakers seeking to get away from it all in the heart of nature.

Different ways to make money from your French property

“It could have gone very badly wrong as I had no idea about altitude,” says Teo. “I’m from Belgium where the highest mountain is about 50m! We ended up here at 800m. We normally get snow every year and even just the difference between our house and the nearest village is enormous; it’s much colder up here. I wouldn’t want to be much higher, but we didn’t have a clue!” Of course, in the summer months, the cooler temperatures are very welcome.

You’d imagine Teo might miss the sea, he is very happy in land-locked Ardèche where the beautiful landscape brightens his days.

“I could do my job here or in a city, the stress level would be the same,” he says. “But here I drive through the mountains and the forest to get to work, and if I’ve had a difficult day, that drive changes everything.

“It’s been hard sometimes because we live in the country and it can be cold, but we wouldn’t change anything. Some of the locals had a few hesitations about us to begin with, but once they knew we were staying to live here all year round, nearly everyone accepted us and made us incredibly welcome.”

What about Lesley, does she miss being a high-flying lawyer? “No, I was so glad to get out of that! I did it for 19 years, starting off doing criminal work then personal injury. It was very interesting but the level of responsibility sometimes gave me nightmares.”

“I miss my good female friends,” says Leslie. “They come to see me and that’s lovely, but it’s not quite the same. I have made friends here, but it’s hard finding the friends that you really connect with. I think if you have children, that helps a lot.

“But the quality of life here is so good, the food is wonderful and I don’t miss the stress of London and my old job.”

Previous Article 11 celebrities who own a property in France
Next Article How will Brexit affect healthcare cover for British expats in France?