Running a cycling business and B&B in Limousin 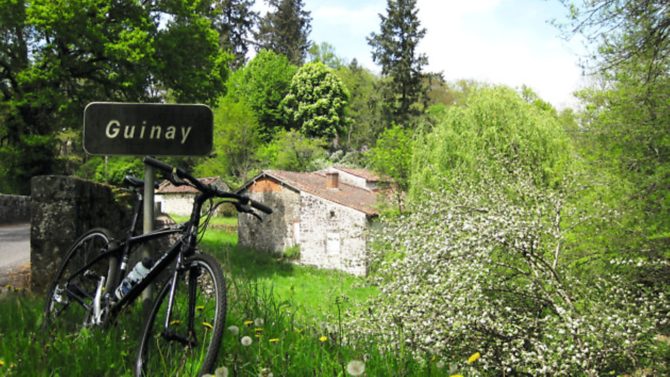 In the heart of the Limousin region lies the village of Bussière-Poitevine, home to husband and wife Chris and Charlotte Nightingale. They are the driving force behind both The Velodocteur, a bicycle repair and renovation service, and Maison Bussière, a jaw-droppingly pretty 17th-century house they have renovated and turned into a B&B.

The pair are blissfully happy, but surprisingly, life in France wasn’t their first port of call.

“We originally had a five-year plan to move to Italy,” says 55-year-old Chris, explaining that they changed their minds when Charlotte’s uncle came to stay with them at their home in Hove in November 2011. He told the couple about a house he’d acquired in a French village that he was having difficulty selling; the village in question being Bussière-Poitevine, in Limousin’s Haute-Vienne department.

“The short version of a very long story is we ended up renting it from him, which has worked really well. Now, we’ve bought our own place in the same village, just across the square,” Chris adds.

Before the couple met, Charlotte, a 42-year-old former high-flying financial PA, had spent 18 months working in New York City. “I’m ludicrously enthusiastic, which they loved,” she says, explaining that she found it challenging to adjust from the dynamic pace of life in the States when she returned to the UK in July 2008. Meeting and falling in love with divorcee Chris in January 2010 turned things around.

Chris had retired after 30-odd years with the police force, during which he’d worked both as a sergeant and then as a civilian specialist, and was running a mountain bike business as a sideline. He had always loved mountain biking, walking and climbing, and alongside his police work, had gained qualifications, which had allowed him to lead group expeditions.

March 2012 saw the couple get married – and it seemed that when it came to their plans for life together, fate was giving them a nudge. Charlotte explains: “When we met, it was a meeting of business plans, really. I’d got a corporate hospitality background – it was something I’ve done a lot of within the roles that I’ve held – and the intention was to move somewhere we could have a B&B, but also run an outdoor-activity business as well, largely based around mountain biking. We’d have made it work wherever we were. This house fell into our laps and it was too good an opportunity to pass up.”

Although transferring Chris’s business from the UK to France seemed simple on paper, there was bad news. While researching outdoor-activity business opportunities in France, he discovered that his walking and climbing qualifications, gained in the UK, would not be recognised.

Fortunately, all his mountain-biking qualifications were not only recognised, but were very much in demand. He had also qualified as an advanced cycle mechanic, vital for the renovation and repair business he runs today.

The couple made the move across the Channel in June 2012. However, there was a culture shock in store, as they got to grips with French bureaucracy.

“We realised that emails don’t always get answered, for instance,” laughs Chris. “Everything has to be done by snail mail, and you have to make two or three visits, rather than just the one. Once I got my head around that in the first year, I don’t think it was that bad. You just have to understand that everything is done in triplicate, and where you expect one sheet, there’ll be five.”

Charlotte, keen to underline what they both regard as an important point, insists: “There’s a huge cultural thing that nobody seems to talk about, and some people seem enormously unprepared for. It is the simple fact that France is a different country. You have to be respectful of the fact that you’re the immigrant; you’re the ones who are moving in. I think we’ve had it fairly easy, but I wonder how much of that is our attitude?”

She goes on: “I suppose it partly comes back to that customer service thing. Because Chris and I are used to dealing with all sorts of people, we would instinctively have respected where we are, who we’re living amongst, and their history and culture.”

Paperwork and cultural niggles aside, the couple’s biggest challenge by far when it came to setting up and running two businesses in France, was getting to grips with the language.

Chris says: “My advice to anyone would be to have at least good tourist French before you move here. Learn the language. For me, it was a nightmare. At the age of 52, I felt like a five-year-old again, and wanted to run away because I could not communicate with anybody. I’m two and a half, three years down the line now, and I’m at the stage where I’m comfortable with most situations. It tends to create a bit of laughter, if I get my French wrong or if I get a tense wrong, for example, and they think it’s funny. People are asking me to use the informal tenses, and it’s a big step forward.”

As for their village and the corner of France they now call home, it’s an area that’s known for being beautifully rural, and largely agricultural. When asked if they would have chosen to live in this particular part of France, rather than have heeded the call of a tempting business property elsewhere, Chris muses: “I think if we hadn’t come here, we would have gone slightly further south. Perhaps south of Limoges, not into the Dordogne but the bit in between, because it’s quite beautiful. But frankly, having now moved here, this has got so much to offer.”

Charlotte enthuses: “We really love this village; we’re really lucky. As a small village goes, there’s a lot going on here. It’s got a fairly thriving social life, though you’ve got to be prepared to throw yourself into it and go and find it, but it’s there. We’ve got a really fantastic maire who’s very progressive. He’s really pro any kind of business. He’s also the GP! We were really lucky with this village. Everyone’s been incredibly welcoming and supportive.”

When they’re not socialising, the pair divide their time between the two businesses, with Charlotte overseeing the day-to-day running of Maison Bussière and dealing with the marketing for both enterprises. Chris helps out at the B&B, but spends about 70% of his time as The Velodocteur. Charlotte points out that she’s far from on her own with the B&B side of things, and reveals that she and Chris work with each other to offer clients the best service possible.

When it comes to evening meals at Maison Bussière, she explains: “Many of our guests are searching for homes themselves in this area, and they particularly appreciate the benefit of our experience, shared over the dinner table.”

That means informing guests about the nitty-gritty of life in France; from the realities of the housing market to hot topics such as health care and schools.

She adds: “I’ve tried to do it on my own – you’d think with years of corporate hospitality behind me it would be okay, but because I’m doing everything on my own, all the cooking, serving, eating with people, trying to keep the conversation going – it’s just too much!”

As if they haven’t got enough on their hands, the pair are in the early stages of adding a tea room café to their business interests. Charlotte explains: “It’s an idea we’ve been kicking around for a while. This village is brilliant, there’s lots going on, but there isn’t a café. There’s a tabac, which serves coffee and it’s very much an adult’s place.

“Our vision of thesalon de thé is to create a very family-friendly space. There’ll be baby-changing facilities, a box of toys, and really good-quality teas, coffees and food.”

Chris explains how the new venture will dovetail with their existing businesses: “The salon de thé will be themed for bicycles and will become the home of The Velodocteur. At the moment, people bring their bikes in and they want to talk! A repair may take 20 minutes but the talking takes two hours, so if I can guide them into the café in the meantime, hopefully it will work.”

It’s clear there’s hard graft ahead of them, and whatever changes are yet to come, it seems ever-enthusiastic Chris and Charlotte look set to take them in their stride.

When asked what the best thing is about France, their answers come easily. Charlotte says: “We’ve both been very busy, things flying at us from all avenues, both before we met each other and the two years before we moved here. When people ask ‘why France?’, I tell them it has a pace and quality of life we couldn’t have found in the UK.”

Chris agrees. “It’s been one great adventure since we arrived,” he says. “There have been the ups and downs, like with everything else, but the bottom line is: we are having a fantastic life. All the bad bits in the UK, including the weather, just disappeared out of the window.”

“We might be working seven days a week, but it doesn’t feel like it, and we just have so much fun. We love it.”

Previous Article Where to buy French property… if you want an expat community
Next Article Currency Q&A: Exchange rates