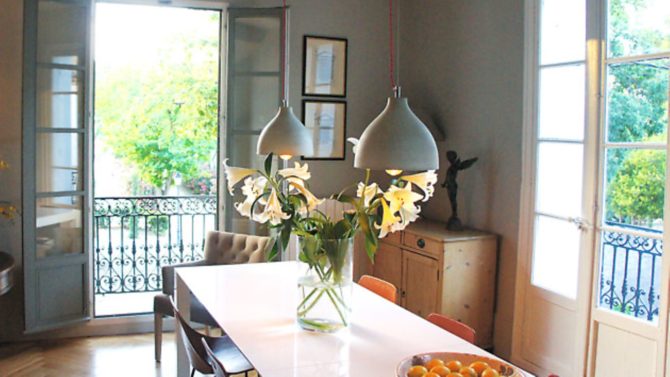 It’s been a busy, exciting, and most definitely life-changing two years for Rob Budden and his partner Jason Clifford, who swapped London life to fulfil their dream of running a luxury chambres d’hôtesin the south of France.

it’s no accident that Rob ended up moving across the Channel, as the former Financial Times journalist has had a close connection with France, and Languedoc-Roussillon in particular, since he was a child.

Rob explains: “I first came to the village of Mèze with my family, when iwas about six. We went on holiday to the resort of Cap d’Adge and then ventured a bit further inland and discovered the village. We were living in Belgium at the time, and when my parents saw a little one-bedroom house for sale, they decided to buy it, as they thought we’d be coming to the south of France a lot.”

Since then, Rob has been coming down to the picturesque village most years of his life, from school holidays as a child to visits at Easter, Christmas or in the summer with friends and his partner Jason.

It was during what turned out to be a life-changing holiday to mèze in April 2013 that Rob spotted the house of his dreams for sale. The property wasn’t a new discovery for Rob, who’d in fact had his sights on the charming house for many years.

“When you live somewhere, there’s always a house you like the look of and this was one I’d always admired, so icouldn’t believe it when I saw a cardboard ‘à vendre’ sign hanging off one of the balconies.

“I suggested we go and have a look, not really thinking I was going to go ahead and buy it, but at that point property prices had corrected a little bit so it was certainly cheaper than I thought it was going to be,” remembers Rob, who went on to purchase the village house with the idea of transforming it into a boutique chambres d’hôtes business.

The property, situated in the heart of Mèze, dates from the 1800s and was originally built as a maison vigneron by the owners of nearby Château de Girard, who had several residences in the village to house their vineyard workers. After being developed by the previous owners in the 1970s, it hadn’t been touched since, and was in much need of some TLC when Rob and Jason took on the project.

From the outset, the pair had a clear vision of what they wanted to do once they got the keys to the property, as Rob explains: “Within about three seconds of seeing the sitting room for the first time, I’d already decided that I wanted to take down certain walls, and put the fireplace and sitting room where the kitchen was. We wanted to sympathetically restore it and return it to how it would have been, while adding modern conveniences.”

The first element of the building project involved ripping out the renovations from the 1970s to open up the property and bring back the original period features that had either been concealed or removed over the years.

“We exposed a lot of beams that were hidden under square-tiled false ceilings, added a marble fireplace and put in some parquet flooring on the main sitting room floor. With the window tax in the 1930s, I think they’d shut off a couple of the French windows that open on to the balconies, so we reopened those. We put in wooden, French-style windows that mirror what the original ones would have looked like so they’ve got espagnolette latches. We didn’t want to put in anything that wouldn’t have been in keeping with the building’s history,” says Rob.

The previously unused loft space was converted into two of the four en-suite guest rooms, but deciding how to adapt the space for modern living proved to be a trickier element of the building project. “It took months of thought. it was much more challenging, particularly because there were massive beams we had to work around,” remembers Rob, who employed the services of local builders to carry out the work to create a home that harmoniously welcomes guests and provides living space for the couple.

With three London house renovations under his belt, albeit on a much smaller scale, Rob was no stranger to managing building projects, and says the key is getting quality workmen. He was lucky to have a connection to local builders he knew were good, as his parents had refurbished their property about five years previously. “The builder has been renovating properties in Mèze for about 40 years. He doesn’t just know how these old houses are put together; in most of the houses, he knows who lives in them and has done work on them.”

Being on the ground in France, without the confines of a 9-5 job, made project-managing the build a much easier task than previous renovations had been. “When I was doing up houses in London, I literally had to make decisions as I rushed into work, so it was all a bit mad. With this project, we’ve had plenty of time to think, and we could really keep on top of progress,” says Rob.

When it came to deciding the decor of the property, it was Jason’s talented creative streak and experience of working as an interior designer, that guided the style of the property. While much of the inspiration for the interiors was down to Jason’s instinctive design nous, they also used the visual tool Pinterest to gather ideas for everything from radiators to windows in order to create the look that seamlessly blends old and new.

“Some of the pieces we bought new, some we had already, and a lot we picked up at antique shops or brocante markets,” says Rob, who says they’ve always been interested in sourcing second-hand finds.

While the trend for brocante hunting has become more popular in the past decade, Rob says it’s still possible to unearth bargains. “There are fewer to be found now, and the prices have moved, but you can still pick up gorgeous mirrors or lights for very little money. There are quite a few antique shops in nearby Pézenas, and we’ve had quite a bit of fun buying stuff there, and every month or so there are antique fairs in Montpellier and Béziers.”

They have married these antique finds with more modern accents to create a unique mix and match style in the rooms, which exude luxurious chic while offering a practical base for guests looking to explore the department.

Since opening for business last year, Mèze Maison has welcomed guests from all over the world, and the couple are keen to share their love of the region with others. “It’s not like the Riviera with its super yachts; it is very authentic and friendly round here,” says Rob, who hosts an evening apéritif of drinks and nibbles; providing the perfect opportunity to chat to guests about the diverse array of activities on offer in Languedoc-Roussillon, from swimming in the nearby Étang de Thau lagoon, to visiting the many vineyards for which the region is famous.

The relaxed pace of life in Mèze proved to be a big pull for relocating and Rob and Jason enjoy living within close proximity of the harbour, beach and the market, which can be seen from their sitting room balcony.

“We love going to the market. When you’re living in a big city, and working very hard, you don’t have much time to cook, so it’s really nice to be able to wander leisurely round the market, linger over a coffee, pick your produce and get to know the sellers,” enthuses Rob, who has been getting his university-level French back up to speed since moving.

The couple have easily adapted to the lifestyle shift that living in Languedoc-Roussillon brings, and when they go back to London, they are amazed at how fast-paced life is and how impatient people are.

“Living here, you do start to slow down. We are always busy, but it’s not always running round like a maniac, it’s just a little bit more relaxed. You’ve got more time to talk to people or enjoy that alfresco espresso on the square, and in the summer, I try and swim in the lagoon everyday.”

It’s clear that Rob and Jason are in their element since moving to France. Not only did they have great fun bringing the historic and characterful property back to life, but it has also given them the work/life balance they so craved, and they are now relishing their new ‘jobs’ as owners of Mèze Maison.