My experience of moving from America to the Loire Valley 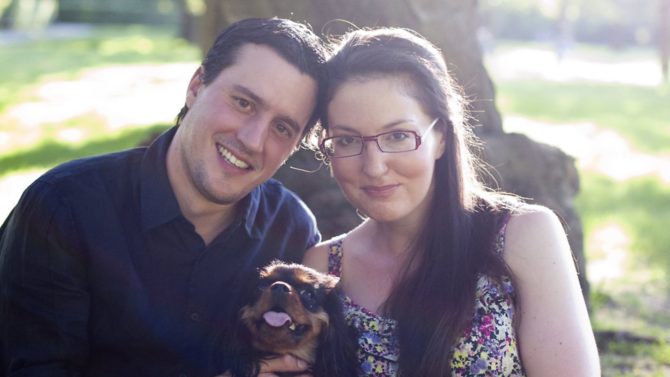 Originally from New Jersey in the United States, Diane officially moved to France a couple of months after her wedding in August 2011 to her French partner Tom, whom she had met a few years before when he was visiting New York on holiday. Although Diane had visited France a couple of times before (once as a high school student, then again 10 years later with a friend), she never imagined she’d be living in France. But as she says, “sometimes life surprises you!” Diane and Tom now live in the Maine-et-Loire department, not far from the historic town of Angers and Diane documents her life in France on her blog ouiinfrance.com.

That’s a big question (my ‘reflections on five years’ piece on my blog goes into greater detail). I don’t really know any other foreigners living here. I’m not in Paris or a big city so I don’t usually come across any other Americans. My town has a basketball team which has a few American players, but generally they’re here for half the year and then move on. Mostly, I interact with French people in my small town.

Something I’ve learned is that people who belong in your life will stay there regardless, and no move, job change, baby, relationship, health crisis or whatever will change that. The people who are in your inner circle love you for you. Sometimes a major life change will test the relationship and show you who really is in your corner.

Maybe most importantly to me is that I’m still the same old American I always was. My humour is still a tad inappropriate and I still find stupid things funny. America still feels like home. It’s comfortable and familiar. With every trip back, I take comfort in the fact that my home still feels like a home and I’m welcomed by family and friends with open arms. I’ve had little culture shock moments here and there; at my core, I am, and always will be, an American.

How have you been treated as an American in France?

I think I’ve been treated fairly, no better or worse than any other foreigner living here. Sometimes not being French works to your advantage (as your accent can be a conversation starter) and other times it causes people to keep their distance (people see right away you’re not French and steer clear). I think you can find kind-hearted people everywhere just like you can find rude, inconsiderate ones as well. My experience in France overall has been good.

What kind of home do you have?

We live in a single family home that was built in the 1950s in our town’s centre, with a little yard that’s perfect for our dog.

How did you find the property buying process in France?

This is our first home and I didn’t find the process to be too complicated or stressful, but I’m sure the fact that my husband is French played into that. He was there to explain anything that didn’t make sense to me and it was a relief to have a native speaker to go over the fine print.

A few things stuck out though. Firstly, there’s the huge amount of paperwork. On the closing date at the notaire’s, we must have signed over 100 papers. It was a huge stack! Secondly, I don’t believe there’s a system where you can access all the homes for sale in an area, as there is in the United States. If you want to see a property, you have to call and they’re all repped by different agents. In the US, you often work with one real estate agent and they will be with you from start to finish. But this is not the case in France. Maybe there are specialised expat services for foreigners, but generally, if you want to see 10 properties, you’ll be working with a variety of agents.

Thirdly, while I’ve never purchased a house in the US and don’t have a frame of reference for this, moving in France certainly takes quite a while. Sure, the fact that banks are closed on Mondays in many cases and closed for lunch may have something to do with the delay, but does it really take a couple of months for a loan to be processed? I guess so!

How do non-EU residents buy a property in France?

How do French properties differ from American ones?

I feel like French properties tend to be sold ‘as is’ a little more often than you’d see in suburban USA. Sometimes houses require major work and other times it’s just light stuff. Also, it was important to me to have a bathroom that had a toilet and sink in the same room. You’ll find that many homes have a toilet room with the sink and shower/bath in a separate room, usually next door or just down the hall. I’ve always found that strange because it means you have to touch the doorknob before washing your hands. Anyway, certain comforts of home were important to me.

Another thing is French homes have volets (shutters) and it’s a bit of a cultural thing.

Sometimes they’re wooden and other homes have metal ones that roll up and down. I personally find them a hassle although I understand why people like them. I think a good set of blinds, curtains and triple-pane glass is just as effective, though.

I also noticed there were a lot of photos of ‘naked’ lightbulbs in real estate listings. I guess people either don’t buy light fixtures or buy removable fixtures that they take with them when they move, so seeing hanging lightbulbs on wires (not the decorative kind you see in minimalist homes) was strange. This tends to be the case in older homes. People just don’t cover them even after they move in and get settled. My neighbour’s house has all uncovered bulbs.

What about the lifestyle and culture? How is that different from the US?

I have so much to say about this. I live in a small town but compared to New York it’s rural! Living in a big city has expectations that go with it and life can get very busy and stressful. In France, people move more slowly, relax more, and seem to enjoy life in a different way. I admire the French way of life and living here has made me a better person.

This is why we love living in France all year-round

What has been the most challenging aspect about living in France?

I think a lot of things are difficult for foreigners abroad; some of them have to do with the country itself, like the language, and other times it’s just dealing with life problems that become magnified when you feel like you’re a fish out of water. I do OK on the homesickness front since I talk to my parents almost daily and keep in touch with people from back home. What’s been the most difficult for me is making friends. This is by no means a ‘France’ problem though. I think it’s difficult for adults anywhere to connect with new people – even within your own country or state. I’ve done meet-up groups, joined my town’s gym, and even went to a Mormon church (I’m not religious) to meet people but it’s been really hard! I speak French well but it’s clear I’m not French so sometimes that makes me stand out and is a source of frustration.

Do you think France will be your ‘forever home’?

I don’t know! I could see myself living back in the USA at some point and I know my husband would like to have that experience as well. But is it in the near future? I don’t think so. But you never know and life can change in an instant, so I’ll never say that France is my forever home or that the US is either. We always have options and sometimes life takes an unexpected path.

What about the formalities; visas, working, healthcare and so on?

I’m currently on a 10-year carte de séjour as the spouse of a French citizen. It’s like a green card in the United States, more or less, and gives me the legal right to be here and work. But marrying a French person doesn’t automatically make you a citizen. I can’t vote or anything like that. I have a health insurance card and have the same access to healthcare as a French person would. I work and pay into the system so I’m covered like the French or other permanent residents.

What tips would you give other foreigners moving to France?

Remind yourself that expat life is what you make of it and everyone’s experience is going to be different. Just because someone else lives in the same country doesn’t mean you’re going to live the same life – so focus on what you have going on and make the best of what you have available to you. There’s no single way to experience a country so just do what’s best for you and don’t be afraid to go against the grain.

Most importantly of all, it’s imperative that you try to integrate and adapt to your new country. Maybe that means joining a local sports league or book club or even enrolling in language classes. On a smaller scale, putting yourself out there might look like making small talk with shop owners or chatting to a neighbour that you’d normally just say hello to. Pushing past your comfort zone and showing yourself you can do it is one of the most rewarding aspects of expat life. So wherever you can, take a risk and you might just pleasantly surprise yourself.

Previous Article British things you won’t find in France
Next Article Why are French school dinners so good?