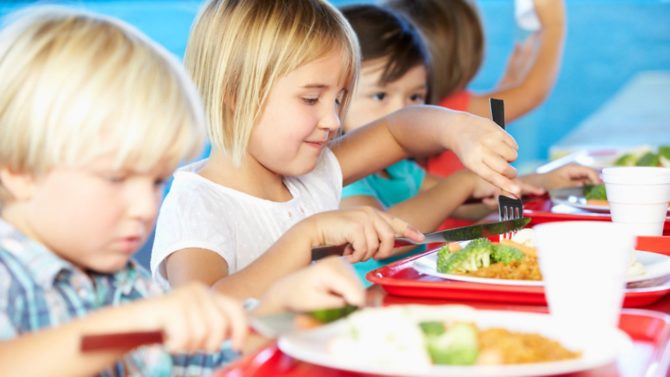 Like many mums, I baulked at the news that we’re now meant to be consuming ‘10 a day’ rather than five. Any parent of young children will tell you that shoehorning five portions of the good stuff into little, reluctant mouths is a challenge enough; the idea of 10 is a distant dream.

However, my kids are probably closer than some to achieving this holy grail of vegetable consumption. Not because of anything I’ve done personally, but because of the attitude to food that they’ve picked up at school.

Bearing in mind that some of the pupils at the maternelle start at the tender age of two and a half, you’d probably expect the school dinner menu to consist of puréed potato and fish fingers at best. However, even the tiniest palate is plied with a three-course meal on a daily basis; and no one brings a packed lunch.

Looking at the menu – dietician approved – that comes home on a monthly basis, this month my children will be consuming delights such as poisson à la bordelaise avec haricots beurre and escalope de porc avec lentilles. Moreover, each school dinner has three courses, with starters this month including salade niçoise or concombre à la crème and desserts often fruits de saison or strudel aux pommes, with only the odd crêpe au sucre or tarte noix de coco thrown in.

Being surrounded by tiny classmates who consume such a range of flavours has meant that my kids have more discerning palates and an open-mindedness to new tastes than they’d ever have developed at home. Plus, heaven forbid I forget to give them a serviette at the table.

Of course, they still have their likes and dislikes. I recently questioned Timmy (4) as to what he enjoyed most about his school meals – hoping to replicate some at home. “What’s your favourite meal at school?” I asked. “A round thing,” he told me earnestly. “Is there anything you don’t like?” I asked. “I don’t like olives,” he informed me, with a scowl.

When it comes to health, although the French don’t seem to be sugar-shy, quaffing pains au chocolat for breakfast, and enjoying crêpes on an almost daily basis, I believe it’s their penchant for set mealtimes that keeps them on the slim side.

12 things you should to know about French schools

Rigid mealtimes seem to be imbued in the French culture, with many French friends confused at the fact we often have our evening meal before 7 o’clock. As for something to keep them going, 4 o’clock seems firmly established in the French psyche as goûter or snack, and one French mum was overwhelmed when I offered her a slab of cake with her coffee one morning. “We ‘ave the impression that the English are always eating!” she admitted.

Of course, although visitors from Blighty are impressed at my children’s table manners (for which I take full, undeserved credit), my kids are still little children and do refuse certain items of fruit and veg according to their particular taste, including anything with ‘grass’ (herbs) added.

At the same time, they are used to having a variety of accompaniments with each meal – so much so that my four-year-old Joe recently handed back a plate I’d given him with a slice of pizza on it, declaring that “I don’t want it like that! I wan’ carrots an’ sweetcorn an’haricots verts!” And Evie (3) informed me recently that while she doesn’t like ‘veg’ she wanted “peas an’ cawwots and salade” with her tea.

So while ‘10 a day’ might be a bit of a stretch even for me, living in France has certainly given my children a greater chance of reaching this target.

Like this? Don’t miss Gillian’s other insights into living in France:

Why do shops in France shut on Sundays?

What la rentrée means for parents in France

Previous Article My experience of moving from America to the Loire Valley
Next Article WIN! A copy of Curiosities of Paris